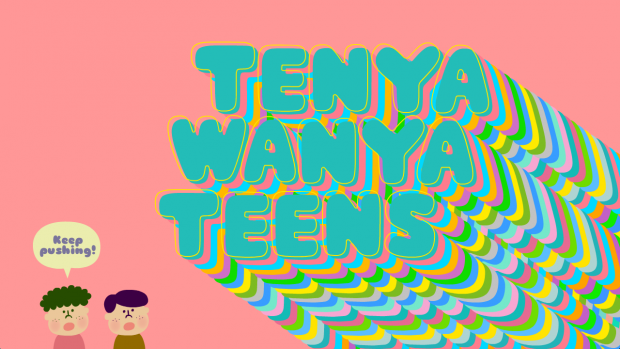 Last night I got the chance to go hands-on with two new indie games from the mind of Katamari Damacy designer Keita Takahashi. Austin area indie games collective Jeuegos Rancheros hosted demos of both games- Tenya Wanya Teens and A͈L͈P͈H͈A͈B͈E͈T͈ – at their monthly meeting, marking the first appearance of Tenya Wanya Teens since GDC last week, and the first time ever for A͈L͈P͈H͈A͈B͈E͈T͈ to appear anywhere.

A collaborative effort between Takahashi-san, Uvula studios and UK-based indie games group Wild Rumpus, Tenya Wanya Teens sets out to answer the question “what if we made a ‘Mario’ game but instead of jumping and platforming with two buttons, you had sixteen buttons and they all performed different silly actions, but the buttons would randomly change locations during gameplay.” Described as “a coming-of-age tale about love, hygiene, monsters and finding discarded erotic magazines in the woods” two players run through each level, confronted with various objects or characters that prompt them to conduct an action; If the level has a microphone, you press the appropriate colored button to ‘rock out’, and your character strums a power cord on the guitar knocking the mic over.

If the level has a toilet, you press a button to drop your pants and pee in it. There are sixteen actions in total, and as players progress through each level, more actions are introduced and some levels can have up to five different actions. Each successful action adds to the score, with the player having the highest score after the last level (always ‘sleep’), proclaimed the winner. To a casual observer, Tenya Wanya Teens appears to be little more than a memory game with a joystick, but the led-lit buttons on the controller randomly change while gameplay is happening, often during the same level. Obviously, this game isn’t quite where it needs to be for mass consumption, but as it stands now its a surprisingly engaging simple party game that brings out the most laughs every time your character accidentally urinates on something. It also manages to prove that finding a dirty magazine in the woods is a common global experience for teenage boys, regardless of culture.

If you’re wondering what those marks are underneath the letters in the title, they represent legs, which of course means A͈L͈P͈H͈A͈B͈E͈T͈ is a letter racing game. A͈L͈P͈H͈A͈B͈E͈T͈ is a collaborative work between Takahashi and Austin’s own Adam Saltsman, creator of iPhone superhit Canabalt, and is one of the fulfillment tiers for the LA Game Space Kickstarter that ran late last year. The demo was in an alpha state (Takahashi himself recorded an odd little video that morning to reinforce this utilizing two little dolls held up to the camera)- only the letter character designs were in place and the environments were incredibly rudimentary- but the trademark simplicity and humor of the Katamari and Nobi Nobi Boy creator was in full effect. The controls are simple- hold down the key that corresponds to the letter or letters on the screen, hit space to jump. In early levels, when you have only two or three letters on the screen, it’s ridiculously easy, but once you get up into a dozen or more letters, holding down that many keys and coordinating your jumps becomes a bit tricky, especially since the letters collide into each other and bumble around clumsily on screen. In its current state, A͈L͈P͈H͈A͈B͈E͈T͈ is not really much of a game yet, but there is definitely potential.