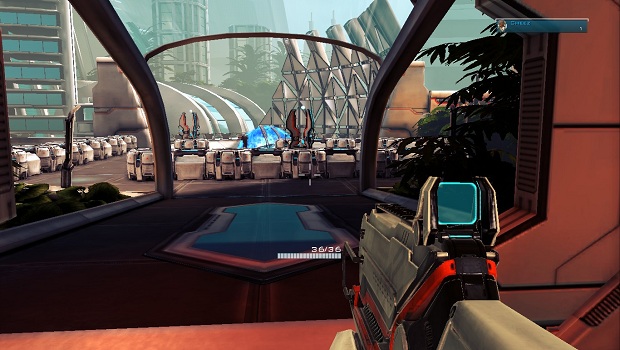 Enemies are coming. Kill them.

Those five words form the core experience of any tower defense game. The enemies, settings, and weapons may vary, but in the end the goal is simple; defend a given object or area from the waves of enemies trying to push their way through by building towers to impede and attack them. Sanctum, released in 2011 to mostly positive reviews, added some first-person shooter elements into the mix by allowing the player to directly attack enemies with weapons. Coffee Stain Studios is the independent developer behind that game, and its sequel Sanctum 2 which is due to be released this year. I got a chance to play around with an early version of Sanctum 2, and what I saw definitely shows promise.

[singlepic id=11704 w=320 h=240 float=left]One of the biggest differences between Sanctum 2 and its predecessor is appearance; the sequel looks much more polished and the fresh coat of paint better suits the futuristic setting of the game. Comic-style cut-scenes between levels hint at a storyline, continuing from where the first game left off. Gamers can once again take on the role of Skye Autumn, but this time they have other options as well. Skye’s sister Sweet Autumn and friends Haigen Bagge and SiMo are also playable characters. Each character has their own unique abilities and primary weapons.

Other than that, a variety of towers, perks, and secondary weapons are unlocked as you play through the game and rank up. You’ll need to adjust your strategies and loadouts for each level; there’s a decent variety of different enemies, and you’ll need to consider their particular strengths and weaknesses when crafting a strategy. Success is defined as defending the “Core” on each map from waves of attacking foes. The Core has a limited amount of HP, and attacks from enemies will drain it. If it reaches 0, you’ll lose the level and have to try again.

Enemies won’t hesitate to target you as well; those with ranged attacks will fire at you while melee based units will give chase and lash out at you when within range. By using the build phase between waves to craft a maze of towers and blocks, using your own guns and weapons to deal extra damage, and simply knowing when to run, you can usually avoid taking too much damage. If your limited health is depleted, you’ll be taken out of commission for about ten seconds.

Variety of maps, weapons, and enemies combine to ensure the experience never gets boring. Some maps feature multiple enemy spawn points, [singlepic id=11707 w=320 h=240 float=right]forcing you to rethink your tower placement or try to funnel your foes towards a central path. Some enemy units are able to fly, further complicating things; flying enemies will pay no mind to that complicated labyrinth you just painstakingly built. Even after mastering a level you can replay it with “feats of strength”– modifications that up the challenge level– which earns you extra experience and adds life to the game.

Overall, Sanctum 2 takes everything that made the original FPS/tower defense fusion work, and makes it better. Movement is more fluid, enemies are more challenging, and there is more variety in the game’s settings and weapons. Online multiplayer will add replay value but from what I’ve seen, the campaign alone already offers a very respectable amount of gameplay. The difficulty curve is a bit inconsistent and there are some issues with menu navigations, but if Sanctum 2 launches at the same price point as its predecessor, fans of the genre will have plenty of reasons to give it a try. In addition to a PC release, the game is also coming to Xbox Live Arcade and PlayStation Network later this year.