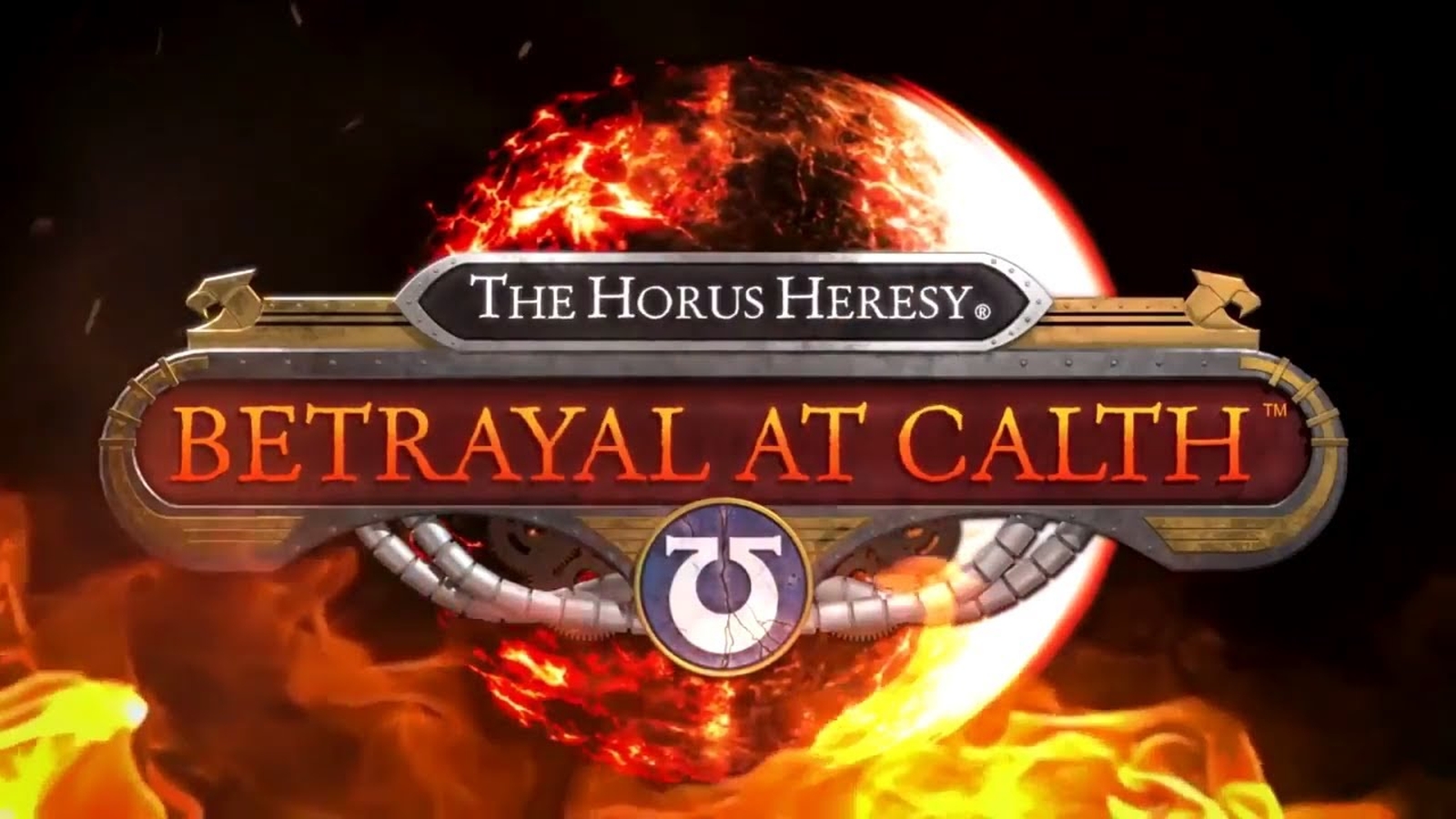 If you are a tabletop fan, you recognize The Horus Heresy: Betrayal at Calth as a rather beefy tactical game from Games Workshop in which the Emperor lays his plans for the enlightenment of the galaxy at the feet of his son, Horus.  Horus, much to his father’s disappointment, instead has chosen to embrace the Age of Darkness, becoming fully corrupted by Chaos.  As a result, the Imperium is thrown into disarray as civil war divides the Space Marines.  Steel Wool Studios, the team behind the well-received virtual reality titles Bounce, The Mars Odyssey, and Quar: Battle for Gate 18, have taken this tense tabletop scenario and are working hard to bring it to the virtual playspace.  By the Emperor…it’s quite good.

Like the tabletop game, Betrayal at Calth is is a turn-based tactical game.  There are other skirmish titles on the Vive and Rift, but often these are little more than tower defense knockoffs.  Betrayal at Calth is more ambitious than this, looking to bring the ruthless fight between the Space Marine Legionnaires and their Word Bearer enemies to life in the virtual space, offering up a host of brutal units like Terminators, Contemptor Dreadnought, and every flavor of Marine you can field.  Bolters, Flamers, Rockets, Chainswords, and Lightning Claws, oh my!

If you’ve never played a Warhammer 40K title, be warned going in that it’s fairly lore-heavy.  Right out of the gate, the team at Steel Wool Studios acknowledge this by including a Lexicanum.  This will be helpful when they fill it in (right now it’s just a hall to look at player models) allowing players to get into the more esoteric bits of the Warhammer universe. Even without it, there isn’t a barrier to entry, but it’ll be a good addition for those who can’t tell the difference between a Chainsword and an Eviscerator.

Betrayal at Calth puts the player into the mind of Magos Ohmnal Sarc, a member of the Martian Mechanicum in the city of Calth.  The game starts on the observation deck of the watchtower Numinus Concentric South (told ya it was lore heavy).  After a quick tutorial, it’s off to the battlefield.

In terms of production value, I’m quite amazed at just how well the Steel Wool team has captured the look and sound of the Warhammer universe.  Massive banners hang in the hallowed halls, Space marines are perfect down to the last rivet in their armor, and the play space is alive with action as the fight rages around you.

As I’ve said in other VR reviews, the sense of scale is often the biggest lure, and that’s very true here.  Space Marines stand over seven feet tall in their Power Armor, and that scale holds up nicely here.  Right out of the gate, you’ll end up in a room with a giant Mechanicum statue, and the size in VR is hard to even describe. In fact, that sentiment could be said about the whole game.  Steel Wool didn’t go big…they went BIG.

To ensure they had a story big enough to match this 30-year-old franchise, they enlisted the help of Black Library author Rob Sanders.  Though we don’t get to see a whole lot of story in this first act, what I’ve seen thus far matches the quality you’d expect from his earlier work.  Your character, the aforementioned Magos Ohmnal Sarc, finds himself smack in the middle of a war between the Word Bearers and the Ultramarines.  Sarc discovers corrupted data in the data stream and must find a working data terminal amidst the ruins of Calth to interpret what he has found.  It’ll be interesting to see where the story goes from here.

In terms of gameplay, this first act is meant to introduce you to the world and help you field your forces effectively. Each unit gets two Tactical Points per round, and performing an action (e.g. hacking an object, firing a weapon, rearranging a Word Bearer’s face with your Chainsword, etc. ) costs you a point.  Line of sight, flanking positions, and the types of cover around your team become immediately important, and as you face more foes, increasingly challenging.  Low cover will lower your hit percentage chances, and armor damage will make you easier to kill.  After only a few hours of play, it was very clear that there is a lot more tactical gameplay here than I expected.

There are easy parallels to games like XCOM: Enemy Unknown and XCOM 2, and that’s high praise indeed.  Selecting the nearest heretic, you can see a ‘to hit’ percentage displayed on the right Vive wand HUD.  When you engage in combat, your units have three ranges – effective, long, and out.  These ranges determine your hit percentage and damage.  The weakest units die first, followed by more critical team members, until the attacking or defending squad are dead.  Moving in close, you can initiate an Assault action.  At this point, both sides will pull out whatever melee weapons they have and duke it out face-to-face.  During an assault, the defending group will retreat (“Cowards! To admit defeat is to blaspheme against the Emperor” —Roboute Guilliman, Primarch of the Ultramarines) when it loses more Legionaries than the attacking party.  If you wish, you can then use the Reform action to push the remaining Marines into another group, provided there is enough room in that squad.

The tactical map hearkens back to the tabletop game, providing a hex-based overview of the battle space, as well as identifying the types of cover in the area and their potential destructibility, ramps that will change elevation (and your chances to hit or be hit), and any complete or incomplete objectives. While the maps in the first act are smaller in scope (if not in scale), I suspect later acts will push more units onto the field, and the ability to teleport from this map will come in very handy.

The story-based single-player game, while naturally linear, does already show a few different play styles.  During one mission, I was disarming rogue turrets.  Another had me running and gunning directly against the Word Bearers.  The fifth mission forced me to dig in and defend my position while I waited for a data transfer to occur. In this defensive mission, I had a limited number of Legionary, Veteran, and Sergeants to deploy,  each with their own unique armaments. Effective placement and mixing my leaders with my rank-and-file Legionary troops were the keys to holding this defensive position.  This is a mode I can see becoming incredibly popular as a multiplayer option, forcing one side to try to unseat the other.

Beyond the single-player slice, there are currently four multiplayer maps and two gameplay modes – an objective-based and deathmatch-like Skirmish mode.  Surprisingly, there’s cross-compatibility between VR and non-VR players alike, and it’s already working quite well – a feat many AAA developers can’t manage at launch.  I was surprised as I played inside VR and at my PC, I found no advantages or disadvantages to either, other than my legs getting tired from standing.  It is easier to pull the camera up for a more tactical view on PC (something that might make VR players nauseous, but it’s nothing that’ll break the game). The game also works well sitting, and I suspect that, unless other features that require being upright, most players will play in this posture.

As The Horus Heresy: Betrayal at Calth can be played in VR or outside of it (a wise decision by Steel Wool), the game doesn’t suffer VR fatigue. You can simply drop out of VR and pick the game back up on your pancake screen.  I imagine that this will become more of a plus when the full game is released, as there are going to be 24 single-player scenarios split across five story Acts.  From what I’ve seen in just Act 1, the team knows the lore, and they are ready to deliver in a big way.

Left trigger teleports you around the map, left grip confirms, and the top button opens up the game menu.  On the right wand, the right trigger selects, the touchpad lets you select an action from the menu wheel, and pressing the thumbpad selects that action.  Finally, the top button on the right wand brings up a very useful tactical map.  It’s fairly straightforward, and the tutorials do a good job of easing new players into this control mechanism nicely.

The game has just moved into Early Access, and what I’ve seen is encouraging.  There are some occasional bugs, some assets like exploding boxes or cover aren’t quite animated, and the game is largely devoid of background sounds or music in its current state, but the central gameplay loop here is an incredibly strong foundation.  The team is promising more unit types, as well as additional multiplayer maps, a player vs. AI skirmish mode, character customization (by the Emperor, give me my Dark Angels!), and “a few surprises” as they march towards a mid-year estimated full release.  Hold on, folks – the Heresy Hype Train has no brakes.