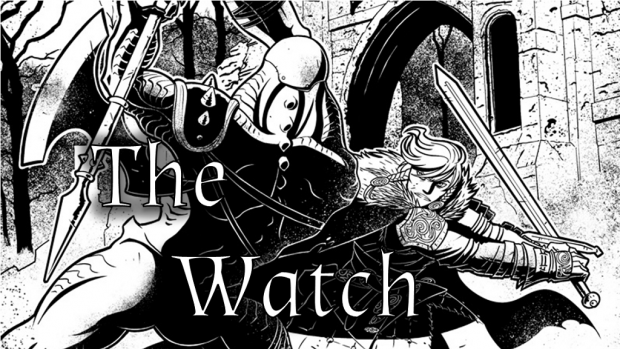 Since its release in 2010, Apocalypse World by D. Vincent Baker has been inspiring numerous new roleplaying games. These games (collectively known as Powered by the Apocalypse, or PBTA) range from telling near-historic tales of Icelandic settlers to focusing on the messy emotional lives of teenage monsters. Currently on Kickstarter, The Watch not only brings a new military-focused low-fantasy game to the PBTA roster, but also delves into some explorations of gender that provide a worthwhile addition to 2017’s crop of new games. Given the RPG industry’s at times rocky attempts at opening the hobby to more than the traditional boy’s club, The Watch provides a refreshing attempt at directly reaching out towards the feminine side of the gaming hobby and is absolutely worth a look from anyone interested in a modern take on traditional military fantasy.

For those not familiar with the Apocalypse Engine, the core mechanic of the game is built around rolling 2D6, adding a single attribute, and comparing it to the following list of results: 1-6 Failure, 7-9 Partial Success, 10+ Full Success. This may sound so straightforward as to provide too light a mechanical framework for experienced gamers to enjoy, but the choices this system can force on a player push forward.

The move ‘Unleash the Wolf’ represents the sort of combat mechanic most RPGs include, but usually only provide results for hitting, missing, or possibly scoring a critical result for extra damage. The Watch instead offers players far more choices:

Set in an undefined low-fantasy world, The Watch provides just enough of a framework to get players engaged in the war for the Clanlands but leaves large areas of the world undefined. The corrupting effect of the setting’s nebulous force for evil, known as ‘The Shadow,’ hits men the strongest, so an all-female organization of warriors has been formed to defend the remaining lands. The designers specifically take a moment to clarify that The Watch is composed not only of those born as women, but also those individuals who might identify as women without being called such at birth, or those who might not fit easily within a traditional gender binary.

Questions including, “What are the Shadow’s powers? What is Clan Thason infamous for? What ancient fortresses still hold out against the Shadow’s forces?” will be answered collectively by the gaming group during the first session of play. This often results in a high level of engagement from the players, as they are not simply defending a setting they’ve been handed, but are fighting for something imbued with their own creativity and emotional attachments. Depending on some of the choices made at this stage, The Watch can add in many elements of horror, evoking anything from brutal gore to creeping dread as the powers and goals of the villains take shape.

The Watch is, by design, a story of finite length. Most gaming groups will find that after 10–12 sessions, the story will have been told. Though many RPGs have traditionally opted for open-ended systems that could allow for year upon year of play, establishing a finite timeframe greatly strengthens the game’s ability to tell a coherent narrative and to provide the payoff of a completed story. One example of this is the ‘Jaded’ mechanic that the game adds. As characters fight against the forces of the Shadow, their world-weariness, despondency, and gradual loss of comrades to the struggle will harden them against further conflict (increasing their Jaded score). This puts characters under threat, as accumulating too much jadedness will forcibly remove them from the game. Moves based on their Jaded attribute are exceedingly powerful however and may provide the edge needed to overcome the conflict.

Such classics as The Lord of the Rings, The Wheel of Time, and Game of Thrones can all be seen to have influenced the design of The Watch, but the story being told here is something new, not simply a rehashing of common fantasy tropes. As of the writing of this article, the Kickstarter campaign is at 90% funding, and with over a week to go, it should hit its funding goal shortly. The first stretch goal will be to add three additional roles to the character roster. Following that, a deck of NPC cards stands ready to be unlocked, offering game masters running the game some quick reference cards for mechanics, as well as allowing backers to put themselves/friends into the art deck.

The Watch can be found at: https://www.kickstarter.com/projects/medeiros/the-watch-rpg