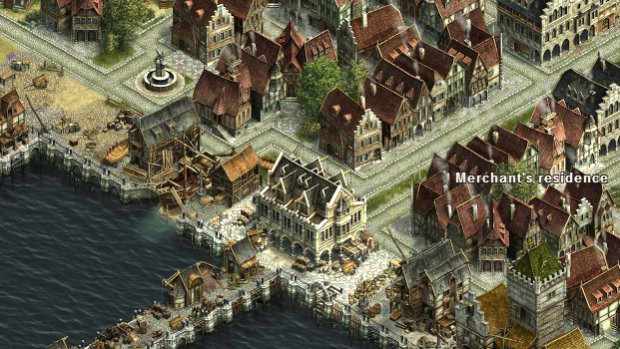 Before the long break between SimCity 4 and Electronic Arts’ latest effort left the genre floundering, several other developers decided to try their hands at creating economic simulators. North American gamers are probably more familiar with the Tropico series, but the Anno series actually predates it by nearly 4 years. Created and recreated over the years by various developers in Germany and Austria, the game never seemed to have caught fire on this side of the pond. Speaking personally, I never even saw an Anno game until I was in my 20s browsing on Steam, and despite my interest, I never got my hands on the series until I found myself in possession of a beta code to preview Ubisoft Blue Byte’s Anno Online.

[singlepic id=12160 w=320 h=240 float=left]As you might expect from the name, Anno Online takes the series into a browser-based free-to-play format. What surprised me when I logged in was how isolated the map was. I can’t say if publisher Ubisoft took lessons from EA’s disastrous design choices in SimCity 5, but as near as I’ve been able to tell, social features are shockingly slim for a game with “Online” in the title. You’ve got a smattering of features—a friends list, a chat window, the ability to see friends’ territories—but overall the game is much less dependent upon social interactions than EA’s title. This isn’t a bad thing, but it was fairly surprising. It’s entirely possible that more social features will come on board as the game nears release, but they certainly didn’t seem vital to enjoying the game.

If Anno Online is any indication, the Anno series takes a bit of a different tack on city-building and trade than other games in the genre. When you begin the game you’re set on an island with nothing but a small dock where ships can land. To entice colonists to land on your island you’ll have to build houses, which require markets, which require roads, which require…well, you get the idea. As you might expect in a city building game, a bit of planning ahead can save you a great deal of headache. Anno Online is a bit more forgiving than other city building simulators in that it has a button that easily allows you to move buildings around, meaning you can correct mistakes made in the past once space gets tight.

And let me tell you, you’ll run out of space sooner than you’d think. The game moves slowly, but you’re only able to use a tiny portion of the island you’re granted until you spend time and resources unlocking new territories. You can buy gems from the cash shop to unlock areas instantly, but those of us who want to keep the game free will have to be patient and bide our time.[singlepic id=12157 w=320 h=240 float=right]

This is where I get a bit worried about pace, however. Anno Online moves at a pace so languorous that glaciers would sneak awkward glances at their watches. Resource accumulation is incredibly tedious in real time, and while they accumulate when you log off there’s a remarkably low cap how much you can have at once.  You can purchase cap increases, but those come in some fairly small increments–I could still blow through my accumulated resources fairly quickly after logging in again. I usually found myself logging in for 30-40 minutes of game play, spending all of my resources and then logging out for the day. I’m sure this pace is to encourage players to keep logging in, and to purchase in-game currency, but I really hope that Ubisoft Blue Byte pick up the pace.

To keep things interesting, Anno Online does throw a lot of neat little quests at you. Doubling as the tutorial, these quests really help a noob into the series’ mechanics, explaining how carts are required to gather natural resources from logging camps, quarries and farms or how different types of houses attract different types of settlers. The whole thing builds complexity slowly, which is a blessing for noobs like myself, though I wonder if old hands will find the elaborate, lengthy tutorial a bit cloying.

As far as graphics or audio goes, Anno Online doesn’t look like it’ll be blowing any minds, but the isometric camera and general style do a really great job of conjuring memories of some classic strategy titles—especially Age of Empires II. There is no universe in existence in which I’d call that a bad thing. For being browser-based, it’s looking like it’ll be completely solid, which is all I’d ask. Unlike certain other publishers, it appears Ubisoft would rather have compelling city-building mechanics than visual flair.

[singlepic id=12158 w=320 h=240 float=left]Anno Online is still in closed beta, so you might expect to see a few bugs, but I never encountered a problem more serious than a bit of lag from time to time (and I have a notoriously terrible internet connection, so that could have been on my end.) At the end of the day, though, this felt like a fairly complete game. Keep your eyes on this one if SimCity 5 left a bad taste in your mouth—it’s different than any SimCity title, but the differences add another layer of strategy. Plus, when Anno Online does reach open beta you’ll have nothing to lose when you buy it—if the servers go down for a week you still won’t have wasted a dime.