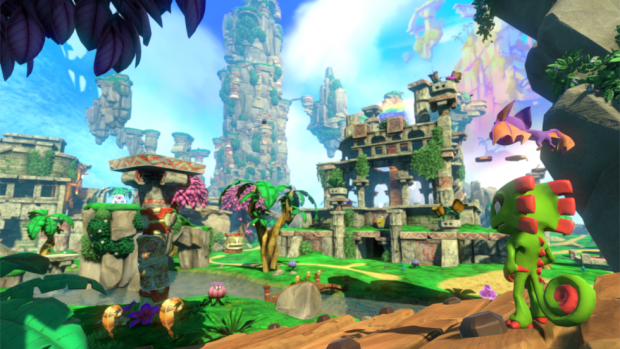 Since 2000, I’ve been anxiously awaiting another Banjo-Kazooie platformer. As a series that helped define my early gaming years, Rare’s pair of Nintendo 64 collect-a-thons enthralled me with their wonderful character design, impeccable platforming, and memorable soundtrack. And while 2008’s Banjo-Kazooie: Nuts & Bolts was a great game in its own right, its vehicle-based structure never quite satisfied the craving that’s lingered since childhood.

If my early hands-off demo of Yooka-Laylee is any indication, my wishes are about to be granted. This revival seemingly embodies exactly what a modern day platformer should be, while still paying huge respect to the late ‘90s bear-and-bird adventures from which they were born. So far, all signs point to Yooka-Laylee capturing everything that made Banjo great, while still managing to carve its own place in today’s barren platforming landscape.

To its credit, Yooka-Laylee is strikingly similar to Banjo-Kazooie. As the demo drops the duo into the game’s early jungle-themed level, the set of abilities available to our heroes parallels most of Banjo’s. Standard jumps and flutter jumps are still available, but Yooka-Laylee can also roll up hills – not unlike Banjo’s Talon Trot – and shoot various types of berries – much like Kazooie’s eggs. The lifeblood of Banjo-Kazooie runs through Yooka-Laylee’s veins and I look forward to seeing how expansive the moveset and platforming becomes in later levels.

Pagies are Yooka-Laylee’s main collectible but are more than just tools to unlock new stages this time around.

The overall structure should be familiar as well. The major collectibles of Yooka-Laylee are known as Pagies. When enough of these magical journal pages have been earned, they can be added to books within the overworld to open new levels. Within each stage, Yooka-Laylee will also collect Quills, which act as the game’s currency and can be given to Trowzer, the game’s dodgy snake salesman, in return for learning new moves. The genre’s collect-a-thon roots are alive and well in Yooka-Laylee.

But while Yooka-Laylee excellently recaptures the magic of early 3D platformers, it does add to the formula as well. As Yooka and Laylee continue to earn more Pagies, they have the option of adding more of them to journals linked to existing levels in order to make those levels even larger. The jungle world seen in the demo – which was already seemingly larger than most Kazooie/Tooie stages – grew into a much more expansive playground as more Pagies were added. This mechanic, says developer Playtonic Games, will mean players are encouraged to return to previously beaten levels later on after new moves have been earned to uncover more secrets and challenges. This should help provide a more open world and give players the choice of direction.

Another cool new feature could be found at the height of the jungle stage in the form of a comical cloud character named Nimbo. While Nimbo sat at rest above a waterfall that flows throughout the entire stage, shooting him with one of Yooka-Laylee’s berries caused the weather effects in the stage to change. Hitting him with water berries produces rain and fills up dried-out rivers below with water, for example, while hitting Nimbo with an ice berry caused snow, making the level more slippery and creating a sheet of ice over bodies of water below. Changing the weather had a very reminiscent Click Clock Wood feel to it, and it’s exciting to think of what other opportunities dynamically changing stages can present.

Nimbo can dynamically change a level.

Of course, as great as the early gameplay seems, much of Yooka-Laylee’s charm comes from its excellent character design. There’s such a comical, cheeky quality to the cast of Yooka-Laylee, which Playtonic claims is an effort to build lovable and enduring characters that can reappear and expand in potential sequels. Playtonic has a skill of taking ordinary objects, like a nimbus cloud or pages from a book, slapping googly eyes on them, and infusing those characters with life. It’s remarkable, and I can’t wait to see what other charming characters populate Yooka-Laylee’s worlds.

The sound design is top notch as well. Much like Banjo-Kazooie, early samples of Yooka-Laylee’s music play an important part in setting its whimsical tone. While we’ve only heard a small portion of composer Grant Kirkhope’s work on Yooka-Laylee, the entertaining music already helps set the mood of what is being played, straight down to the familiar use of the overworld music track changing to fit the theme of nearby levels. It’s another subtle throwback to Banjo, but another welcome embrace of Yooka-Laylee’s roots.

I obviously walked away from Yooka-Laylee very impressed with what I saw. As someone who misses the golden age of 3D platformers, this demo is proof that I’ll be getting exactly what I’ve wanted all these years. Excellent platforming, dynamic levels, and large worlds brimming with lovable characters are just a few of the charming elements that brought a smile to my face during my brief experience. This could be the shot in the arm that the genre needs, and Kickstarter backers can rest assured – Yooka-Laylee is the game you’ve been looking for.

Yooka-Laylee releases in Q1 2017 for PlayStation 4, Xbox One, Wii U, Windows, Mac and Linux. For more on Yooka-Laylee, as well as all of our E3 coverage, stay tuned to Gaming Trend.

Editor’s Note: As true as my excitement for Yooka-Laylee is, I am a Kickstarter backer and my opinion should be handled with that in mind.