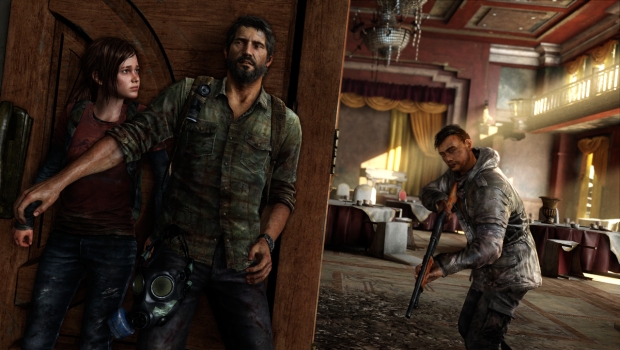 We went hands-on with The Last of Us recently and are among a select few that got to enjoy multiplayer that has, until now, has not been shown or even talked about.  While our review won’t go live until 6/5/13 at 7:00am (the global embargo), I do get the opportunity to reveal just how multiplayer works for this fantastic title.   While those of you who picked up God of War: Ascension download the playable demo, check out this snippet from our review for The Last of Us:

[singlepic id=12719 w=320 h=240 float=left]Normally multiplayer is a bit tacked-on when the single-player experience is this solid.  It’s a balance between making either one the focus.  The folks at Naughty Dog didn’t settle for less, focusing on both and ensuring neither one was neglected.  Getting to play with some fellow press and the team from Naughty Dog made me a believer – let’s dig into some multiplayer mayhem.

Multiplayer comes courtesy of hitting a menu option that says “Factions”.  Choosing either Firefly or Hunter, you select whether you want to be part of the organized militia or the ragtag survivors.  Beyond this choice you’ll pick from four different classifications – assault, sniper, support or stealth.  You can also build up to four different custom loadouts of your own when you get the hang of the game.  No matter which faction you pick, the job is simple – take down the other side and collect supplies to keep your crew alive.

Unlocking additional skills, firearms, and purchasable items, comes from acquiring supplies. Performing actions like downing enemies, executing them, getting revenge, getting a headshot, and other activities generates parts you can spend on weapon upgrades, ammunition, and armor.  Supplies also let you buy additional weapons like a hunting rifle, bow, or larger weapons like a burst rifle or semi-auto rifle.

The big items in multiplayer come in the form of purchasables, and all but one of those (the shotgun) is locked in the beginning.  These items are deadly and can turn the tide of a fight pretty quickly.  Selections include the single-shot scoped “El Diablo” pistol, a military assault rifle, a flamethrower, or the brutally effective machete.  These have pretty hefty supply costs, so it’ll take a little time and skill  to unlock them all.[singlepic id=12718 w=320 h=240 float=right]

Survival skills operate as optional upgrades that give you boosts to your abilities.  Sharpshooter reduces scope sway by 25%, whereas Crafter lets you create items 75% faster than normal.  Strategist allows you to see when you’ve been marked by an enemy player – a death sentence if you are trying to snipe or act in a stealth role.

Obviously if everyone had unlimited use of the listen mode in the game it’d make for a pretty slow paced multiplayer experience.  In multiplayer you have a meter that has to regenerate to use, so you won’t be hanging back playing as the all-seeing-all-hearing shiv ninja indefinitely.

[singlepic id=12712 w=320 h=240 float=left]All of these things together make your loadout, but you can only spend eight points (until you level up) to customize your weapon selection – you won’t be a walking weapon store.  An example loadout might be 1 point for Reviver skill so you can bring back fallen teammates 30% faster (and with 20 more health), 2 points for the Crafter skill, 2 points for Sharpshooter, and 3 points for a shotgun to back up the revolver which is free to use.

Beyond customizing your loadout, you can also customize your appearance.  Entirely based on the number of people in your clan and how long they survive, you can unlock new hats, masks, helmets, gestures, and a 4-layer emblem you can place on your clothes, backpack, or helmet.  Winning a round in multiplayer tallies up the number of times you got downed, how many times you took out another player, how many times you were revived or revived somebody else, and how many times you died.  How many parts you earn determines the amount of supplies you use to feed your virtual survivor clan, and attracts more people.  It’ll be interesting to see how that plays out later on as larger clans require larger amounts of food, and that means less supplies in your pocket or more hungry people.

All of the customization aside, there are two modes to play with your friends – Supply Raid and Survivors.  In Supply Raid your job is to try to capture supplies and hold out for just 12 weeks – a harder feat than it sounds.   The matches are 4v4 teams, and you are given 20 respawns to share amongst your team.  When you are downed you can be revived if you can crawl to a friend before you bleed out, and if you don’t end up being executed by an enemy team member.  Like the single player experience, scrounging for ammunition is big part of the game.  This means you may have a rifle, but you’ll spawn with only 9 rounds to use.  Killing other players lets you recover their ammunition, and there are various crafting components that you can use to build Molotovs, nail bombs, and the like.  The great part is that at no point are there enough weapons and ammunition to turn this into CounterStrike or Call of Duty.  The game remains tactical, even when the pace quickens.[singlepic id=12706 w=320 h=240 float=right]

Survivors is a single-death Team Deathmatch mode that spans eight rounds.  The first team to earn four victories wins the match.  In this mode you do not respawn and anything you craft doesn’t carry over between rounds, so hoarding isn’t in your best interest.  Just as in Supply Raid, ammunition is scarce, requiring strategy over spray-and-pray.

There are 20 additional missions that help you keep your clan well-trained and alive.  These missions help you skill up, as well as granting you single-use boosters like cheaper ammunition prices, and they help your clan survive.  The missions have three levels of success criteria.  For instance, for “Enemies down”  you’ll get rewards for three, six, or nine enemies taken down successfully.  This determines how many survivors you’ll add to your clan numbers, though each mission has a different reward.

[singlepic id=12703 w=320 h=240 float=left]As I mentioned before, your objective is to survive for 12 weeks, building the largest clan possible.  At the end of 12 weeks (each round of play is 1 day) you’ll be assessed for your success, with rewards unlocked for the size of your clan at the end.  These can be new weapons, hats, or other customization options for successfully completing the meta game.

What surprised me about multiplayer in The Last of Us is just how well the team captured the same frantic scavenging aspects of the single player game in the multiplayer.  It’s not just about restricting ammunition, but also the well-constructed (yet shoddy) remnants of the old buildings, the careful use of your resources, and the need to strategically retreat and regroup to win.  This is multiplayer for the thinking player.  There are no airstrikes, no omnipresent radar, and no helicopters of death here – just good old fashion strategy and skill.