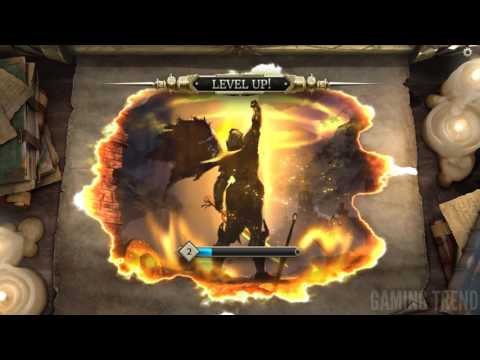 It’s hard to believe that the Elder Scrolls franchise has been around for two decades. During that time, the fantasy realm of Tamriel has hosted a bevy of terrific role-playing action games. Now, Bethesda has taken on the role of the characters of its games, venturing into uncharted territory with its upcoming release of Elder Scrolls: Legends, a competitive, collectible online card game.

Though Bethesda’s venture is new, there’s plenty of familiar faces from the series; wood elves, Orcs, Argonians, and Khajiit are just some of the races represented in the game. There’s even a tip of the hat to former series entries as Whiterun soldiers from Skyrim and the piercing javelin from Elder Scrolls online make an appearance. The game features much of what fans have come to expect from the world of Nirn.

The card game itself fits into the growing world of MMO card games such as the successful HEX: Shards of Fate. Like other games of the genre, each player has the option to face off against other players online or play through a solo story. Legends adds a third mode called Arena, where players run the gauntlet against an AI or other players using special, pre-constructed decks. With a practice mode to tweak a deck to your liking, Legends has a potential of five different ways to play.

The game begins by selecting an avatar within a particular character class. This character class determines which two starting decks or attributes you’ll play with. An archer will begin with green (agility) and red (strength) decks, while a sorcerer begins with purple (endurance) and blue (intelligence) decks. There are 10 classes that mix and match five attributes; much like other games in the Elder Scrolls series, there’s plenty of options geared toward replayability.

Most of the narrative comes through the solo story mode. Players are introduced to battling with simple cards as an old mage tells the heroic tale of the deeds of your characters. Your character meets Tyr, and the two of you are trapped in an arena, fighting to the death for the amusement of surrounding Daedra. Tyr and you eventually form a bond, escape the arena, and set out on a quest of retribution. Starting cards have an attack and defense value: attack drains health from both opponents cards or leader while defense blocks attack. Cards have magicka values based on their strength. A player has access to one magicka which can summon any card valued at one, and magicka increases by one each subsequent round, but extra magicka is not carried over. Magicka can be split to purchase multiple cards. For example, eight magicka can be used to purchase cards valued at three and five magicka.

The standard attack and defense are like most other games of this type, but Legends adds something different. Each battle board has two lanes, and players place their summoned cards in either of the two lanes. Since cards can only attack other cards in their lane, the concept of supporting each flank is important. Allowing an opponent to have sole control of a lane prevents you from responding to stop the threat.

Initially, players can directly attack an opponent’s leader regardless of lane position, but that changes as new card abilities for units are introduced. Guards are vital to defending your character. Guard units placed in a lane prevent your opponent from attacking your leader or other cards, and they must be targeted first in all unit attacks. Many cards have a summon ability that can add value to other cards already played. Lethal units completely destroy any opponent they damage. Ward units cannot be damaged on their first defense, while the charge ability allows units to attack immediately instead of waiting a turn before activation. Twelve abilities are possible, with some cards having multiple abilities at once.

Players are not limited in their attacks by the values on the cards in battle. Decks can also contain spells and items. These can provide instant damage to opponents, or they can enhance cards already in play to strengthen them. In turn, stronger cards can then be activated to fight. For example, a steel scimitar attached to a lowly one attack Fiery Imp can suddenly turn it into a formidable opponent with both three attack and defense. Many times I managed to snatch defeat from the jaws of victory when well played spells and items quickly turned the tide against me.

With each victorious battle, your character’s experience grows. Gained experience can lead to gaining more cards or even packs of cards. It also allows you to upgrade cards in your deck to more powerful ones. Some of these upgrades are automatic, but others allow you to pick between different options. This allows for expanded deck customization when you need to choose between a lethal attack or a stout defense.

Choices have always been an important part of the Elder Scrolls universe, and Legends is no exception. Not only does a player make choices in card upgrades, but the story mode also gives players key decisions. For example, as you and Tyr leave the arena, you are ambushed by a group of thieves. After defeating them, you must choose whether to spare the remaining thief or kill him. Your reward for victory is dependent on your choice. Later, Your triumph over a pack of wolves gives you the choice of raising a cub you found or abandoning it. It’s an interesting mechanic that relates  to the deck building experience. Each battle constitutes a chapter, and at the end of chapter eight, other game modes are unlocked.

Like any other collectible card game, players can choose to spend money to buy packs in order to quickly build powerful decks, but casual players need not be scared away by this. I’ve mentioned that new cards can be won through victory in battle, but there are other ways to earn new cards or packs of cards. Coins are used as the game’s currency and can be won after winning certain battles, and players can also complete quests to earn coins. Quests include winning a multiplayer battle or winning so many games with a particular deck. It may not give you the greatest cards quickly, but you don’t need to drop a single dime on the game to get a deep experience from it.

Elder Scrolls: Legends may just be emerging from a closed beta, but there’s already quite a variety of game play experiences to explore. With the power of Bethesda support behind it, Elder Scrolls: Legends has the potential to be a deep and rewarding game upon its release later this year.