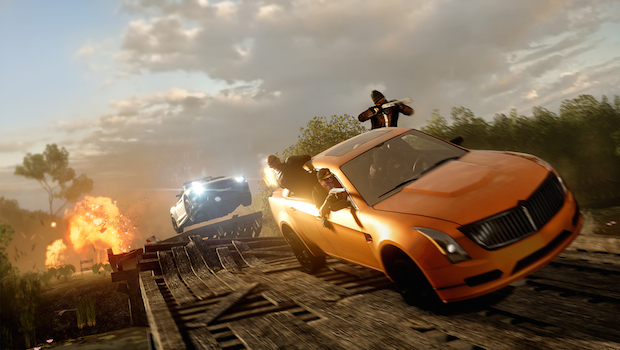 Electronic Arts debuted its new game mode Hotwire for the upcoming Battlefield Hardline, in demo form, at last weekend’s Playstation Experience. A strange mix of vehicular combat and traditional Battlefield mechanics, players have to control certain cars until they’re destroyed, to stop their ticket bar from depleting faster than the other team’s. I got a chance to play a round at PSX, and I really enjoyed the time I got to spend with it.

Playing out in a swampy area of the Everglades, with construction equipment in a nearby empty lot and a highway passing through the map, I already felt like I was participating in a much smaller-scale battle than most Battlefields have been in the past. That’s a really good thing; without tank shells and jets flying everywhere, the focus felt like it was much more on the objectives and players, rather than hoping you didn’t get bombarded on your way to across a giant map. Players are free to chase cars around the map, causing the same amount of havoc and explosions, and the mode we played was certainly conducive to speed and explosions.

Teaming up with players in vehicles is essential to keeping control of the roads.

The game mode itself, cleverly dubbed Hotwire for the stolen cars each team is trying to control, lends itself quite nicely to action-packed car chases and teamwork. Players have to work together, escort vehicles and head off opposing drivers in order to keep their objective cars running.

A nice addition to the map was the multitude of options for vehicles to avoid gunfire. There were plenty of sharp corners to drift around and ramps to jump, allowing clever drivers to avoid oncoming fire or lose pursuers. While there was a natural road to drive around the edges of the map, smart players tended to drive their car towards the swampy areas in the middle, where there was much more cover and teammates to help out.

Yup, there’s gators, so naturally I avoided walking in that swamp as often as possible.

While some objective cars are more built for out-running the opposition, others are a bit more cumbersome and required escort. The van and oil tanker both required the team to either have an escort car with it, or players on the objective car, firing at pursuers. There’s plenty of room in each vehicle, though, so chases in those vehicles tended to be a bit more explosive than motorcycle objectives.

A lot of time in this mode was spent driving, so it’s great that the driving controls feel much more responsive than usual. Driving felt great on every vehicle, and there were options for both first-and-third-person driving. There was also a stereo added, which plays music like Ted Nugent’s “Stranglehold” throughout the match. When you spend a lot of time behind the wheel, it’s pretty cool to have a rock soundtrack backing your car chase.

Overall, Hotwire is a solid addition to Hardline’s multiplayer. Battlefield Hardline is about the cops and robbers dynamic, and that’s been captured perfectly in a clever take on normal Domination-style gameplay. Look forward to Hardline’s release on March 17, 2015, for the Ps4, PC, Xbox One and last-gen consoles.