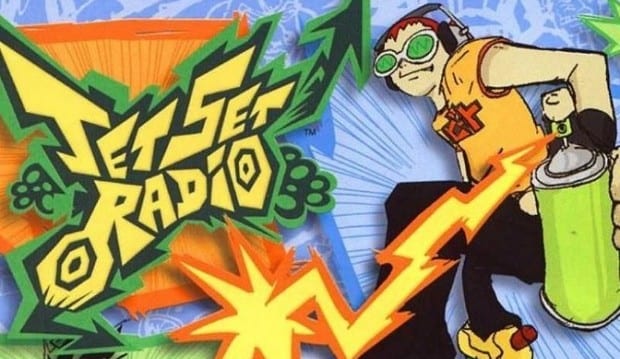 If you had a Dreamcast, chances are good you had a game called Jet Grind Radio in your collection.  It was one of the most unique games ever created.  It oozed style not only in the graphics, but in the animation and soundtrack as well. Now those who never got to experience the original game on the Dreamcast will get their shot this summer when Jet Set Radio is released on PSN, XBLA, and PC.

You play as a member of the GG’s, a gang of skaters that needs to mark their turf with graffiti.  Beat, Gum, and Tab, the members of the GG’s, have their own unique stats. You’ll get your mission objective by DJ Professor K telling you what rival gang you’ll have to deal with.  Rival gangs inclue the jilted Love Shockers, the fish-loving Poison Jam, or the cyborg Noise Tanks. Collecting spray cans while roller-blading all over the level gives you the ammunition to tag your territory.  Be careful of the police though.  They want to catch the juvenile delinquents you have become.

The game looks even better than before. The graphics and animations are intact, but they have all been brought up to a higher resolution.  In fact, the tags have all been redone for high definition.  They’ll have the same look but have much crisper edges to them.  It also has widescreen support.

The unique soundtrack set apart Jet Grind Radio from other games, and the updated Jet Set Radio will not only include the tracks from the original game, but also most of the tracks from the Japanese version as well.  It will be composed of 28 tracks total, with a possibility of two other songs being added later if they can acquire the licenses for those tracks.

One of the worst aspects of Jet Grind Radio was the camera.  It didn’t do a good job of following your character at the correct distance.  Thankfully the camera has been redone for Jet Set Radio.  It does a much better job keeping pace, and it is now controllable with the right stick.