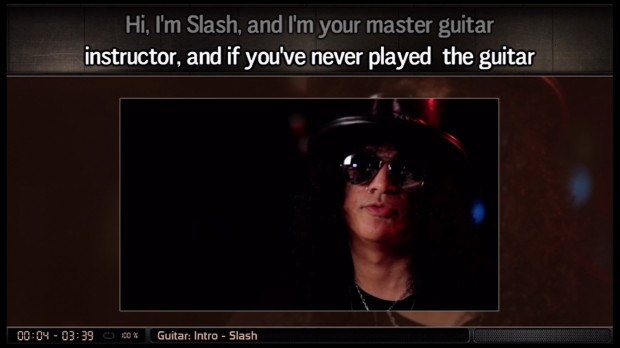 From the moment Harmonix released Frequency back on the original PlayStation I’ve been playing music titles. Rockband, DJ Hero, Guitar Hero, and all their sequels came and went, but it wasn’t until Rocksmith that I was truly compelled to move from percussion (I’ve played drums since I was five) to guitar. The first Rocksmith title failed to bring me the lessons I needed to move my skills forward, falling short with a clumsy interface, forced lesson structure, and weak soundtrack. Rock Band 3 gave us a pro guitar mode, but the execution required special guitars and offered little in the way of actual instruction. Power Gig: Rise of the Six String was dead on arrival, standing squarely in between color-matching and instruction and serving neither very well. The stubby plastic guitar didn’t help, delivering sharp atonal screeches that could hardly be called music even in the hands of a skilled musician. Could any product bridge the gap between game and actual instructions?

If you have read my Rocksmith 2014 review, you know that they have really hit a home run with their newest product, but Matt pointed out that there is a bit missing at the experienced end, not really giving us as many tools to take our work outside of the game.  Developer Realta Entertainment Group has teamed up with Mastiff Games to deliver something that promises to do exactly that – let’s put some calluses on our fingers and get a quick look at BandFuse: Rock Legends.

While my skills are coming up to scratch, I’ll still be viewing this product from the eyes of a novice. When we get closer to the launch later this month, Matt and I will once again go head-to-head for our reviews, so stay tuned for a more seasoned veteran look at the game.

The first thing you’ll notice when you fire up BandFuse is that the isometric and skewed perspective that has all but become the norm is not present here. Scrolling from right to left is a fretboard set up exactly as traditionally-written tablature. As a novice this looks entirely backwards to me as the thickest string is shown at the bottom of the tab, but it is the standard, so I’ll have to learn to read this way eventually.

Keeping things simple, the game presents notes in a color coded fashion, offering suggestions on which fingers you should use to hold the fretted note. Split over five difficulty levels, the lowest level is fairly forgiving, granting ample time to find your finger placements and eschewing chords altogether. Bumping up to the next difficulty level adds in another string or two and throws the occasional chord your way. Moving up from there adds other techniques including palm mutes, bends, and tremolos, though some of those techniques are still outside of my current skill level.

The next thing you’ll likely notice is that the top half of your screen is filled with the official video for the track you are currently playing. It’s been quite some time since I’d seen some of these videos so it was a cool trip down memory lane.

The biggest draw for BandFuse is the outstanding cast of industry professionals on deck to help you learn how to play the guitar. Slash taught me the individual pieces of a guitar, how to strum properly, and the best way to play sitting or standing. George Lynch showed me the proper way to Palm Mute, Mike Ness showed me the best way to strum with a pick or with my fingers, and Zoltán Báthory from Five Finger Death Punch gives us some tips on how to play in a show. It’s not all stars though (and there are more than the ones I’ve listed thus far), you can also jump into valuable lessons that you’d likely be assigned as homework from real music instructors. Exercises include running the Minor Pentatonic Scale up and down for four minutes, learning the Minor Harmonic Scale, or even tackling the Phrygian Mode for future heavy metal shredding practice. Each lesson is straightforward and simple – it’s the sort of thing you’d find in a physical book if you visited a music store with the same desire to learn.

The biggest lure that this title brings comes courtesy of a pair of orange peripherals. With a USB cable you’ll connect your electric guitar (though Slash showed an optional adapter that you could even use on an acoustic guitar!), just like you would in Rocksmith, but the included adapter that plugs into the rear of the Xbox 360 splits the audio away from the HDMI that most of us use on a normal basis. By splitting the audio into analog inputs (or you could use a pair of headphones), all input lag that I could recognize was completely removed. I’ll leave it to far more seasoned hands than mine to really test this theory, but my initial tests were promising.

Learning guitar is hard work. BandFuse is bringing some of the best guitarists of all time to the table to help you learn, and that’s just cool. The game releases on Xbox 360 and PlayStation 3 on November 19th. Stay tuned for our full head-to-head review at that time.