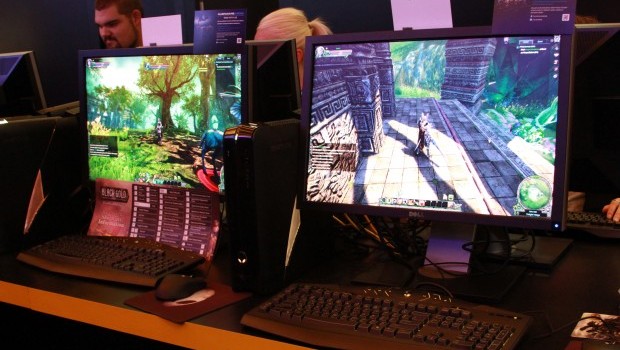 Black Gold Online, the second title for Age of Wushu’s developer Snail games, will put you into a world that is torn by the conflict between steampunk and magic as each sides fight to gain the coveted resource that is black gold. Black Gold puts the player in the shoes of powerful fighters who can take part in the giant PVP battles on foot or piloting giant mechanical constructs and giant magical beast team up in this action PVP focused MMORPG.

In Black Gold the discovery of a mysterious energy source sparked a conflict between the two major factions. The Isenhorst wants to gain the energy to use it in their steam tech and engineering while the Erlandirs want to manipulate its power to further advance their arts of healing and sorcery. The entire battle takes place over a 300 square kilometer continent which will see players using amphibious, air, and land assaults to capture nodes of black gold that are scattered across the map. Each battle that the player participates in is said to have an effect on the overall war between the two sides. The art styles in the game also seem to beautifully capture the battle through the stark contrast that can be seen between the lands of the Isenhorst and Erlandirs.

Each faction currently boasts three different races each and there will be a total of 18 different classes to choose from, which will give players a large variety of different ways to play the game as they see fit. There was also talk of over 100 different types of vehicles that can range from flying machines and flying dragons to mobile artillery and specialized beasts all designed for combat as well as mobility. The major thing that I saw in this game was its attempt to blend first person shooter-style combat with the third person RPG game play to which many people will be accustomed.

There will be different vehicles that will allow players to use giant mechs or war beasts to help their factions in their effort to obtain the black gold and this mounted play style will be intermixed with people who follow by on foot. From what I saw it seemed that the power of the mechs and beasts was balanced by their slowness and inability to react fast where as a person on foot can dodge around and hopefully not get stomped. It will be interesting to see how this mixture of combat will develop further.