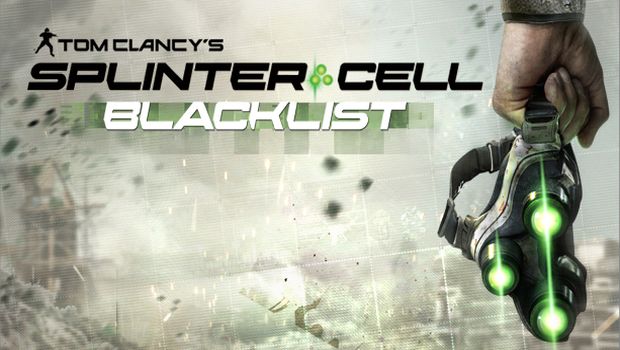 There is no doubt that E3 is a cornucopia of incredible titles in every direction.  This year amped that with two new console launches, so it’d be easy to overlook some of the sequels on the floor – that’d be a mistake.   We got to sit down with Maxime Beland, Creative Director for Tom Clancy’s Splinter Cell: Blacklist to take a look at the reinvention of this incredible franchise.  With Ubisoft Montreal, Ubisoft Shanghai, and Ubisoft Toronto all working on this one title, our anticipation ran high. We came away wondering how the hell they fit this much into a single game, as well as eagerly handing them a well-earned victory for Best Xbox 360 Game of E3 2013.   It was time to get hands-on with Tom Clancy’s Splinter Cell: Blacklist.

Set six months after the events of Conviction, Splinter Cell: Blacklist centers around a single real-world fact that the team wanted to spin into a very scary fiction – the United States has soldiers in ⅔ of the countries in the world.  Blacklist posits a scary fiction that a group called “The Engineers” have given the United States an ultimatum – take your troops out of our countries or we are bringing the war to you.  To this end they’ve released the Blacklist – an increasingly devastating series of attacks on U.S.-controlled interests over a short span of time should their demands not be met.  Sam, now leader of 4th Echelon, is charged with stopping the attacks and learning who is funding and controlling the Blacklist.  We got to go hands-on with two levels from the game, the first of which you can see below.   This level focuses on an attack on a liquid natural gas refinery in Louisiana – you can check that out here:

The second mission had us quietly infiltrating a mill adjacent to a harbor in London, England.  As rain fell and lightning illuminated our position repeatedly, it was obvious how difficult this level would be as a Ghost.  In Blacklist, the action is split between three player types – the Ghost (a hardcore stealth player, running non-lethally – a master of gadgets and deception), the Panther (most players fall here – you want to run quietly, but you have no qualms about leaving a stack of dead bodies in a closet somewhere for your efforts), and Assault (run-and-gun player who isn’t afraid to go loud at any moment), each with their own risks and rewards.  Dodging a guard dog, we climb upwards onto a shipping container and hunker down behind an air conditioning unit.  Pulling out the Tri-Rotor, a small stealthy reconnaissance triple-rotor helicopter, we take a quiet look at our approach to the nearby mill.  We discover that there is a guard with a sniper rifle overlooking the area that could prove to be a hazard – we use a sticky shocker on the Tri-Rotor to put him to sleep, earning 125 Ghost points.  It was at this point that our guide gave us a bit more info on the economy system of the game, as well as some changes to the mechanics of Splinter Cell.

As I mentioned above, there are three modes of play in the game – Ghost, Panther, and Assault.  While you’ll earn points for general exploration, you’ll also earn points in those specific categories depending on how you tackle a particular situation.  Since the enemies are now dynamic and systemic, meaning they are not scripted and their patrols are changed by environmental shifts such as a light going out or a guard not at his post, you as a player might have to shift dynamically between these three modes of play.  The choice is yours, though we did confirm that the entire game can be completed as a Ghost just to be sure.  As you play you’ll earn points that can be used in the economy system.  A silent kill earns you Panther points, a non-lethal knockout will net you Ghost points, and a skillful loud kill will earn you Assault points.  They are scaled with Ghost earning the most, Panther in the middle, and Assault being the least, thus rewarding you for playing the game more within the game narrative and canon.  With these points you can upgrade your suit, boots, goggles, and more.  These upgrades are not simply cosmetic – you can, as an example, add footprint tracking to your goggles for tracking your prey – the Panther concept is no accident.  These upgrades extend to co-op, single player, and even to Spys vs. Mercs, though we’ll need a more extensive bit of time to fully understand how that works.

Back to the level, we ascend some stairs and climb our way up the vertical piping of the outer wall.  As we prepare to crest the edge of the roof we call out to our new partner, Griggs (you’ll play him as a second character in the 14 cooperative missions also included in the game) who sets up across from us with a high powered suppressed rifle to provide overwatch.  It’s a good thing too as the pipe we are trying to use to climb begins to break way, alerting the armed guard just a heartbeat away – his shift ends with a silenced shot to the skull.  Regaining our footing, we climb out onto the lower section of the Mill.  Climbing a secondary exterior wall we find another guard perched far too near the edge.  Leaping up and grabbing him by the back of his skull, we bounce his head off the pavement edge, putting him to sleep for a while and earning 125 Ghost points for the non-lethal action.  In the distance we see the return of the well-received stylistic lettering within the environment reminding us that our mission is to investigate the Engineering Cell.   Before we hit that point, let’s look at the Cooperative play:

Avoiding a pair of guards, one with a sniper rifle equipped with a laser, we dash from cover to cover, avoiding the temptation to simply shoot them both. Crossing the rooftops with a fluidity never-before-seen in a Splinter Cell title, we eventually make our way into the decrepit interior of the building.  We spot a few guards and use the improved “Mark and Execute” system to take them out.  In Conviction you had to use hand-to-hand to earn points to use this system, but in Blacklist it is now a four-stage system that fills as you do skillful things like avoiding detection, killing quietly, and generally playing the game in a natural way.  This means that you’ll earn it faster, giving you an opportunity to use it more often instead of sandbagging it as most people did in the prior game.   The fact that you can now do it while moving simply has to be seen to be fully understood.

Using a fast rope to descend an elevator shift, Grímsdóttir gives us a sitrep on our would-be terrorists – the cargo that Griggs spotted earlier is likely carrying a chemical weapon payload to the next target on the Blacklist.  Using sleeping gas grenades and proximity sticky shockers, we silently dispatch the guards in a nearby room.  Spotting a nearby guard gives us an opportunity to evade using the incredible verticality in the game.  With a combination of wall climbing, moving through the exterior spaces, and using our thankfully-returned whistle, we lure a patrolling guard into the room and dispatch him with a leap from above and our trusty knife, thus ending our demo time…at least with single player.

While Justin took on the single player experience, I got to team up with a fellow press member for a game of Spies vs. Mercs. At launch there will be two modes of play – “Classic” (2v2) or “Blacklist” (4v4) – we got to take on the classic mode.  As before, the gameplay is asymmetric, giving the Mercs a first person perspective and a third person perspective for the Spies.  The gameplay trailer below will give you a great look at the game in motion, showing the incredible verticality and fluidity of Blacklist.

In the end, we came away more excited about Splinter Cell: Blacklist than a great many titles we saw at E3.  With three studios coming together to rebuild this franchise, it is very clear that the teams at Ubisoft are as passionate about this series as we are.  The wait for the August 20th release date is just a little over a month, but having had a small taste of it, I can hardly wait!  Congratulations to the team on Winning our Best Xbox 360 Game of E3 2013, and we look forward to sneaking up on this one very soon!