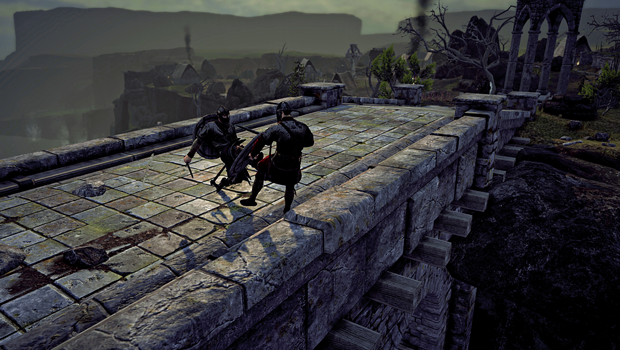 The last time we took a look at War of the Vikings, the Steam Early Access game was already in a promising state. The combat felt slick, the environments were pretty, and while there was still a lot left to be added, the game was enticing. Put short, it managed to make smashing an axe into the foreskull of an unruly viking a fun and engaging experience. More difficult than it sounds, that trick – melee combat is a touchy thing to represent in 3D, particularly with a mouse and keyboard. Now the game features spears, javelins, battle chatter and a conquest mode, all serving to make War of the Vikings a bit more fun and a lot more bloody. I managed to get some time in to try these out, and now I pass knowledge of these experiences on to you.

Before I talk about the actual hands-on experience with the new game additions, I just want to say – executive producer Gordon Van Dyke is the kind of developer the gaming world can never see enough of. His interest in not only his game, but the various real-world details that apply to it – the history of the vikings, the latest insights modern archaeology has offered up on viking culture – are a pleasure to see. I am a man who values gameplay over all else, and what entertains me about War of the Vikings is exactly that, but it’s still a pleasure to listen to a creator describe the historical aspects of a game like this with such legitimate interest.

Enough intellectualism! Let’s talk smashed skulls. Or, in this case, pierced ones. Spears and javelins have been added to War of the Vikings, and they are… well, they’re touchy. These weapons are powerful – particularly in that the javelins can actually destroy shields if they strike one, removing a major defense mechanism from opponents – but thrust-attacks take quite a lot of skill to line up. A wide-arc swing of an axe or a sword covers more territory in which a soft, fleshy throat may be, while a spear has to be pretty accurate to do much damage at all – which, it seems to me, is about as accurate a representation of the weapons as one could hope. The special ability allows the spear to be held sideways for a nice, powerful shove of any enemy in front of you, and in a game where a moment of being off-balance may be the last moment you’re alive, that means a lot.

The battle chatter is also a nice touch. Ever since the rise of Team Fortress 2, multiplayer combat games just haven’t felt the same to me without having player characters displaying a kind of faux-mental autonomy in their yelling and screaming at and taunting each other. Well, now War of the Vikings is graced with characters yelling in both Ye Olde English and Scandinavian, depending on which side of the conflict they hail from. Van Dyke stressed that effort was made to locate skilled scandinavian and Olde English speakers to fill these roles, and to my untrained ears, that effort paid off. Now, I’m not a linguist – I’d probably confuse german for russian in a pinch – but I’m human enough to appreciate what these cries and yells add to the environment. The vikings sound like vikings, the english sound like english, and everyone sounds angry – so hey, mission accomplished on that front.

Conquest mode also helps round out the War of the Vikings experience. I probably don’t need to explain this one in particularly fine detail for any experienced online gamer – you need to take a series of control points in order, which means there’s a nice and constant stream of action around particular, if mobile, points of interest. The largely (though not exclusively – see the javelins, and the bows) melee combat of the game is fun in and of itself, but it’s these gameplay modes that are really going to shape the experience and determine just how distinct and entertaining everything feels. So far the game is off to a grand start in this vein, though I can still appreciate team deathmatch even now, in all of its circle-strafing, shield-blocking glory.

This is far from the last we’ve seen of this game, of course. Particularly encouraging was talk of possible integration with the Steam workshop, allowing for community customization – always something that grabs my attention with a title. The possibility of female vikings was also raised, and this is apparently historical to some extent as well. And in the meantime, for those of you who are interested in this game but who haven’t had a chance to give it a shot yet, some good news – War of the Vikings is currently having a free to play weekend on Steam, giving the uninitiated a chance to wade into combat until Sunday at 1am PST. Give it a shot if you haven’t yet, ladies and gentlemen – this is one of the most promising 3D melee combat games around right now.