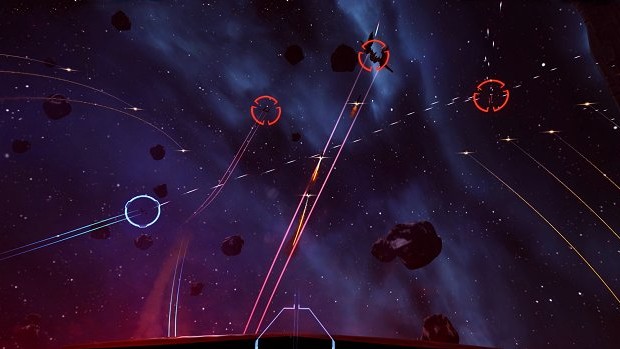 What happens when you mix an Oculus Rift development kit, the Unity game engine, and a couple of developers from CCP with a little extra time on their hands? The answer to this question happens to also be my favorite experience of E3 2013, and that is a space dog fighting game set in the EVE universe: EVE-VR.

EVE-VR takes the player and puts them into the cockpit of a space fighter and puts them into small scale battles between other players. With the help of the Unity engine, the guys at CCP were able to make a game that not only looks good but also plays incredibly well. The game has giant open space areas with giant ships and asteroids and the player is presented with visuals that are in a way majestic and expected in a universe like that of EVE. Then to top off the visuals, the sounds in the game wrap the entire experience together giving you a fully immerse environment in which to get lost in.

What stood out even more to me than the visuals was the length at which the guys at CCP went to ensure that the player would not be overwhelmed with any form of sickness that might ensue from playing the game. The first thing that stood out was that you as the player are sitting down in a cockpit, which means you are in a static position through out the entire experience. This helps mitigate the equilibrium problems associated with standing and playing an Oculus Rift game. A small touch that they did to this front was that if you look down in your cockpit, you can actually see a set of hands and legs. At first this seems like a small detail but it actually helps prevent that nauseating “phantom limb” feeling. They also cut down on the feeling of acceleration in the game to prevent the eyes from experiencing a change in velocity when the body is not, which they found also can cause sickness. Then on the technical side, they found that keeping a high frame-rate is extremely important so the entire game is played at a nice 60 frames per second, so that way when moving your head quickly the transition on screen is fluid.

The game play itself was pretty simplistic, but at the same time it didn’t feel like it was so simplistic it wasn’t fun. Your space craft had two different weapons: your standard firing lasers that you target with the reticule on screen, and then your missiles which are neat because you actually target enemy ships by moving your head to look at them. When it locks on, you fire them off with the single press of a button. You also have a booster which can be used to increase your movement to allow you to out run enemies and their missiles as well as perform some evasive or attack oriented maneuvers.

EVE-VR is currently the game in my mind which can easily be used to show off what the Oculus Rift can actually do and it does so splendidly. It has everything one could want in a virtual reality experience: great visuals and sounds, mechanics which help to prevent any kind of sickness, and simple straight forward game play that you can share with your friends. Sadly though, at the current point in time EVE-VR is still just a little pet project for the guys at CCP and they offered no hints of the game actually being released. If it ever does, it might just get me to buy an Oculus Rift.