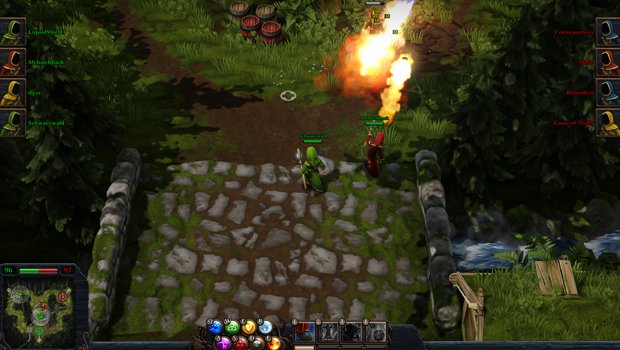 The original Magicka was a fast fan-favorite – a mix of a light-hearted fantasy storyline, an incredibly innovative magical combat system, and quite possibly the thickest Scandinavian accents in all of modern gaming. It’s seen a lot of additions since its release, largely in the form of additional campaign DLC. But Magicka: Wizard Wars is taking the series off in a new, PVP-focused direction, and it’s currently available to play as a Steam Early Access title. I managed to spend some time with this one, and I’ve got experiences to share – and most of them involve accidentally setting each and every one of my teammates on fire. It’s the Magicka way.

For those of you who are new to the series, I’ll give the rundown on what sets Magicka apart from most other games: its spell and combat system. In a word, it’s dynamic. Instead of giving you a set and steady list of specific spells to choose from, Magicka gives you access to a variety of individual element types – water, healing, shield, cold, arcane, fire, stone and lightning. You activate these individual elements and combine them as you please, choosing either to cast them on yourself or target others with them – with the particular combinations ultimately shaping the spell you create. Shield on its own, for example, creates a barrier in front of you that will block physical advances and reflect magical spells. But mixing shield with fire will instead open up an arc of flame in front of you – damaging and burning any enemies who pass through it. Rock may let you hurl a boulder at an enemy, but rock plus cold will hurl a chunk of ice instead.

Experimenting to find out what mix of powers produces what effect is one of the joys of the game, and high-pressure situations can result in mistakes – such as setting yourself aflame instead of healing yourself, or shooting nearby explosive enemies with fire when you really meant to try and put a barrier between you and them. It’s a fun, unique system, which led to a lot of well-deserved acclaim at the time.

Magicka: Wizard Wars takes that same fundamental mix-and-match power system, and adds a PVP focus to it in the form of team-versus-team capture-and-hold-style combat. While the game has only just been released in Early Access alpha-build form, the fundamentals are already up and running, allowing for initial multiplayer mayhem to take place – and I do mean mayhem. Once I created my Paradox account and got into a game (there was a bit of wait, more than the League of Legends player that I am is used to), I found myself in a 4 v 4 fight over three different spawnpoints on a static map. The first team to capture all three spawnpoints and wipe out the enemy team (thus eliminating them while keeping them from respawning) wins the game. If you can’t manage that, you can also win by reducing the enemy’s respawn tickets to zero, and wiping them all out before they can resurrect each other.

In practice, the application of Magicka’s magic system to straight-up PVP works wonderfully. Battles are naturally chaotic, with spells and counterspells flying fast and furious. In addition to the more basic mix-and-match on-the-fly spellcasting, there are more powerful abilities that can be unleashed on the field, activated by doing damage throughout the game. The ones I saw included a self speed boost, the ability to rez an ally, calling down a grim reaper to chase a nearby player for massive damage, and summoning a massive meteor swarm.

Most importantly, however, is the lack of protection from team damage. Part of the fun – at least, if you’re not put off by the potential to make massive mistakes – is the sheer hectic nature of Magicka, which really suits PVP play. More than once I found myself having to think fast during a fight to figure out how to deal with a given situation. Is my ally set on fire? Shooting a jet of water or a healing spell his way will help – unless my aim is off and I end up healing the opponent he’s fighting, or the water that extinguishes his flames is used by a quick-thinking enemy to amplify the effects of a lightning spell. I’ve gone from successfully casting shield spells to protect myself and my allies from damage, to panicking and just casting a gust of fire on everyone around me – sending both friends and foes running around in flames. Honestly, I can imagine some cringe-inducing moments due to this, which makes Magicka: Wizard Wars an interesting title to watch. Insulating players from the ability to be harmed by their allies is usually the norm nowadays, if only out of fear of dealing with trolls. Personally? I liked that aspect of it, no matter which end of the (honest) mistake I happened to be on.

That said, there’s a ways to go with Magicka: Wizard Wars as it stands. I’ve experienced a crash and disconnect here and there, and while you can currently earn experience, new levels and coins, there doesn’t seem to be anything to spend these things on yet. Since the game features a gear system that affects various stats (affinity for each of the 8 featured elements, health, melee damage, attack speed, and movement speed), the potential for customizability seems considerable. There’s also an easy-to-access feedback form for Early Access players – encouraging, since one of the main selling points of the whole “get in on the alpha” concept is the ability to help shape the game by letting the developers know what features you like, which you don’t, and which ones seem to be missing.

Hardcore Magicka fans have probably already signed up alongside me to give this one a try. Those of you who are new to the series and who are looking for a unique team-based PVP experience, keep your eye on this one. It has the potential to turn into something big, and definitely carves out its own little niche among the typical FPS and MOBA options that currently dominate the team-based competitive gaming field.