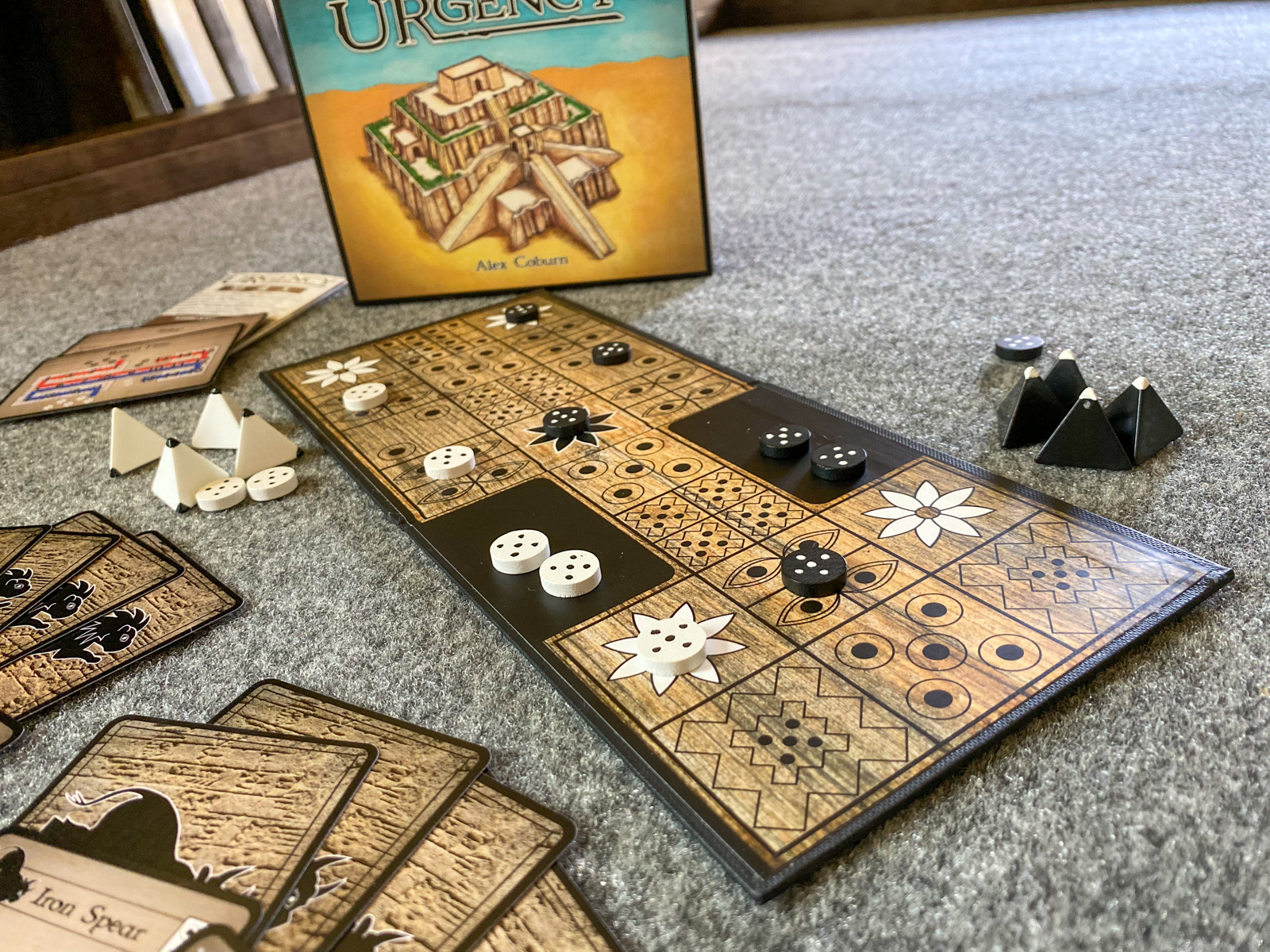 The Royal Game of Ur is the oldest complete board game known to man, with the earliest recovered version dating back to 2600 BCE in ancient Mesopotamia. There have been many ways to play the game over the years, and at one time was even considered to foretell the player’s future, but the actual rules were lost to us for years, until Irving Finkel of the British Museum translated the cuneiform of an ancient Babylonian clay tablet in the early 80s. Since then, we’ve had two different rulesets- the basic race rules, where each of the two players try to get their tokens through the course and off the board, and a much more complex advanced mode involving numbered tokens and a scoring system. Personally, I like the basic rules, but the game could use a little more depth, while the advanced rules take the game in a direction I just didn’t find very compelling. Apparently, Alex Coburn thought the same thing a few years ago, and began designing and testing his own rules centered around the various tile designs on the board. Three years later and he is ready to introduce his variant to the world: URgency 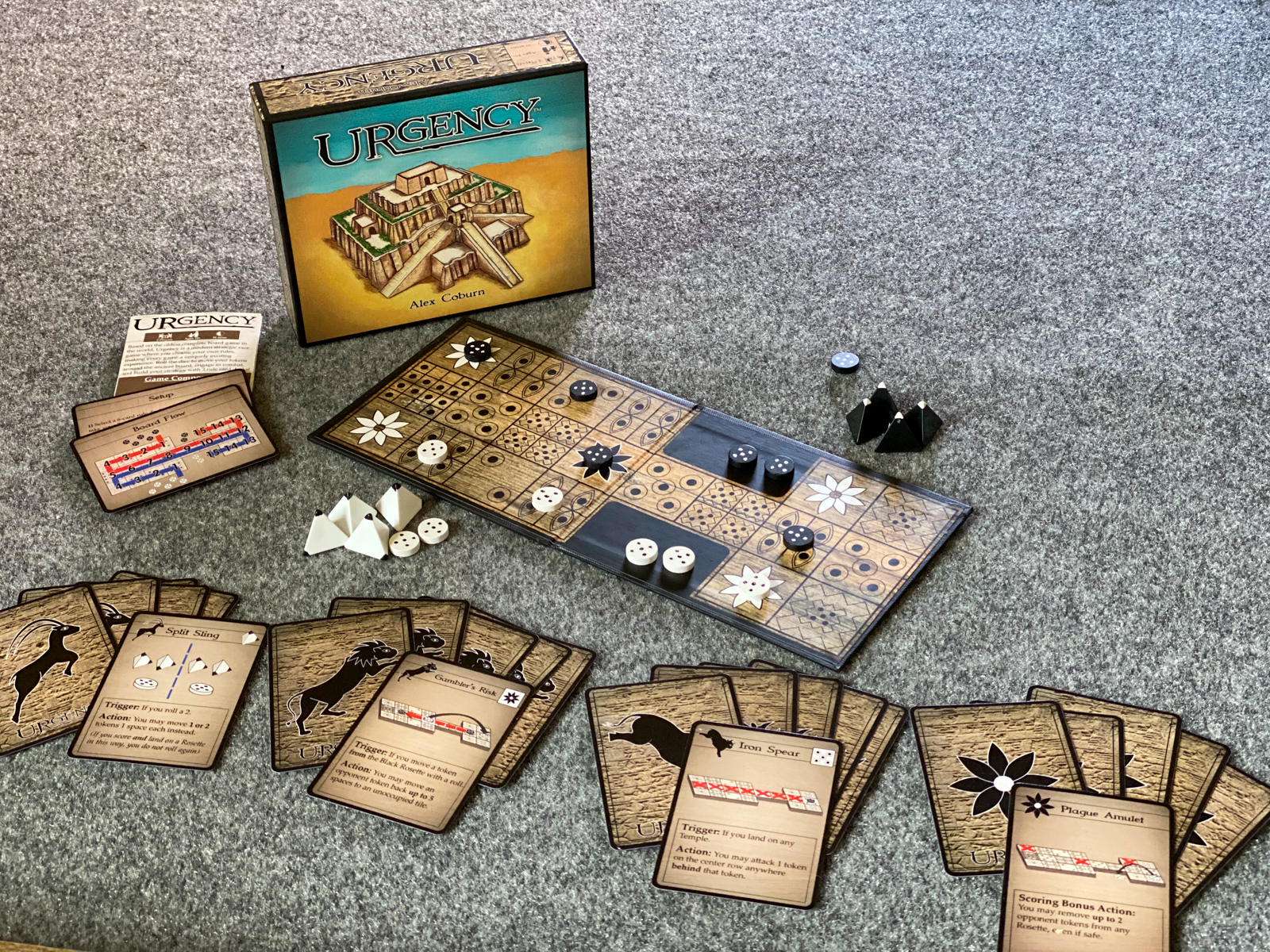 URgency is essentially the basic racing game overlaid with a dynamic card system that gradually adds more player-specific rules that revolve around as each player gets their tokens through the course. There are four six card decks that are distinguished by the symbol on the card backs: rosette, ibex, lion, and bull. The rosette deck establishes the first rule addition for each player, adding a new benefit triggered each time a token reaches the finish line and scores. The remaining three decks represent different playstyles, and before the game can start each player selects a deck and their starting rosette card, which is in play from the beginning. The ibex deck primarily focuses on movement, adding triggers that alter or enhance die rolls. The lion deck is about opponent and board control, adding abilities that directly impact the opponent’s movement and safety. The bull deck enhances offensive capabilities, providing several options of wiping the opponent off the board before they can score. Many of these additive rules rely on the decorative tiles as triggers, and as such these tiles have been given new names: throne, eye, and temple. As each player reaches the end of the course and scores, their opponent chooses a new rule from their deck to be brought into play. Each player potentially has four additional new rules during the course of the game, with only two cards of their six card deck going unused. 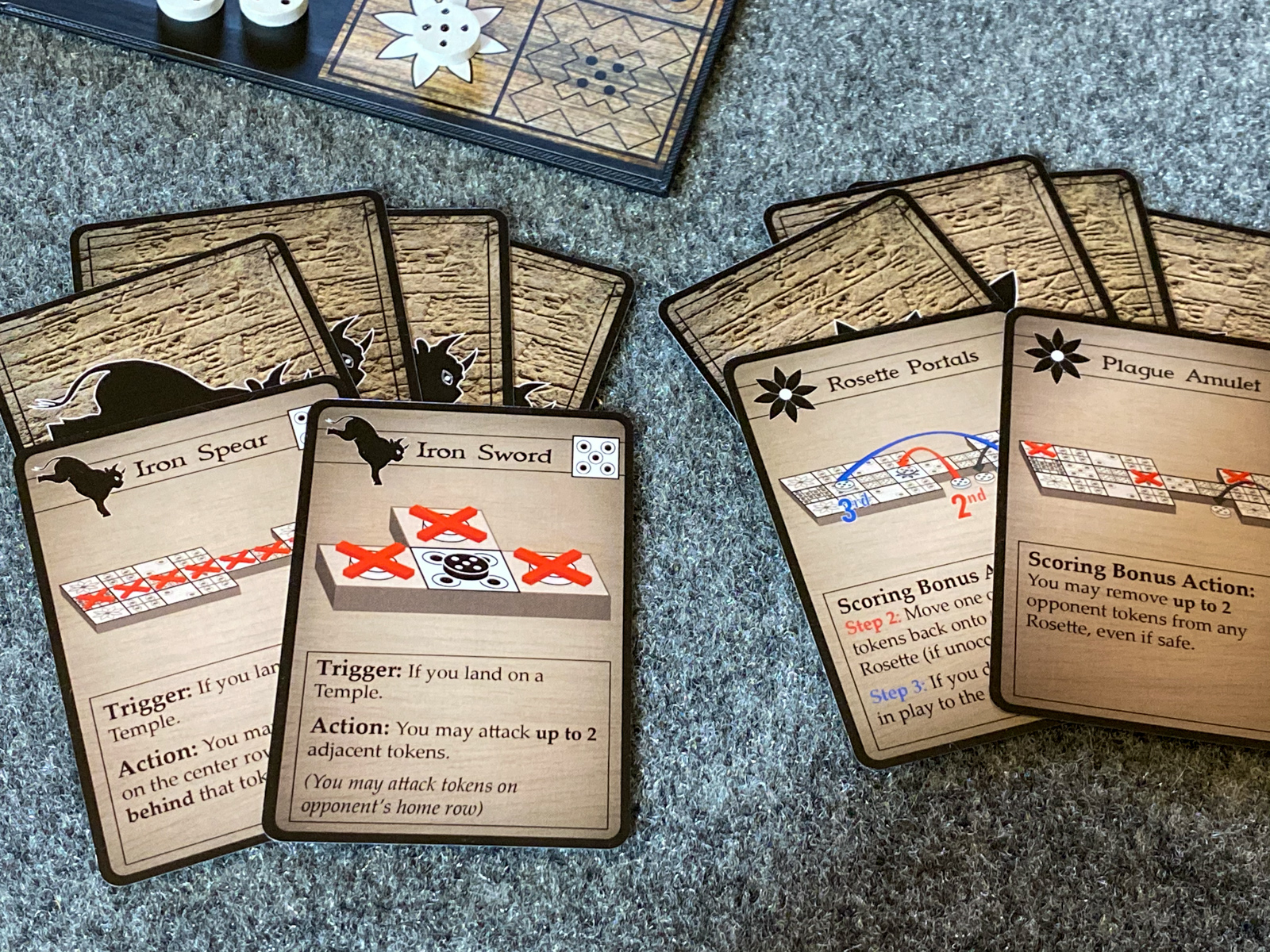 The most immediate impact this dynamic card system has on the game is that it de-emphasizes the race component and boosts the strategy. When you score, your opponent gains an advantage, which effectively incentivizes a stronger balance between the two of you as you progress through the game rather than rushing all of your tokens to the finish line. It is important to note that not only do the rules of the cards override core rules, but they also stack and chain. A good example of this is in the Ibis deck, which has one card that gives the throne tile the same properties as the black rosette tile (safe space, roll again), and another card that allows you to add two to your die roll when moving off of the throne tile. This combination can give the ibis player a crucial advantage in the kill zone that is the first half of the middle shared track of the board. 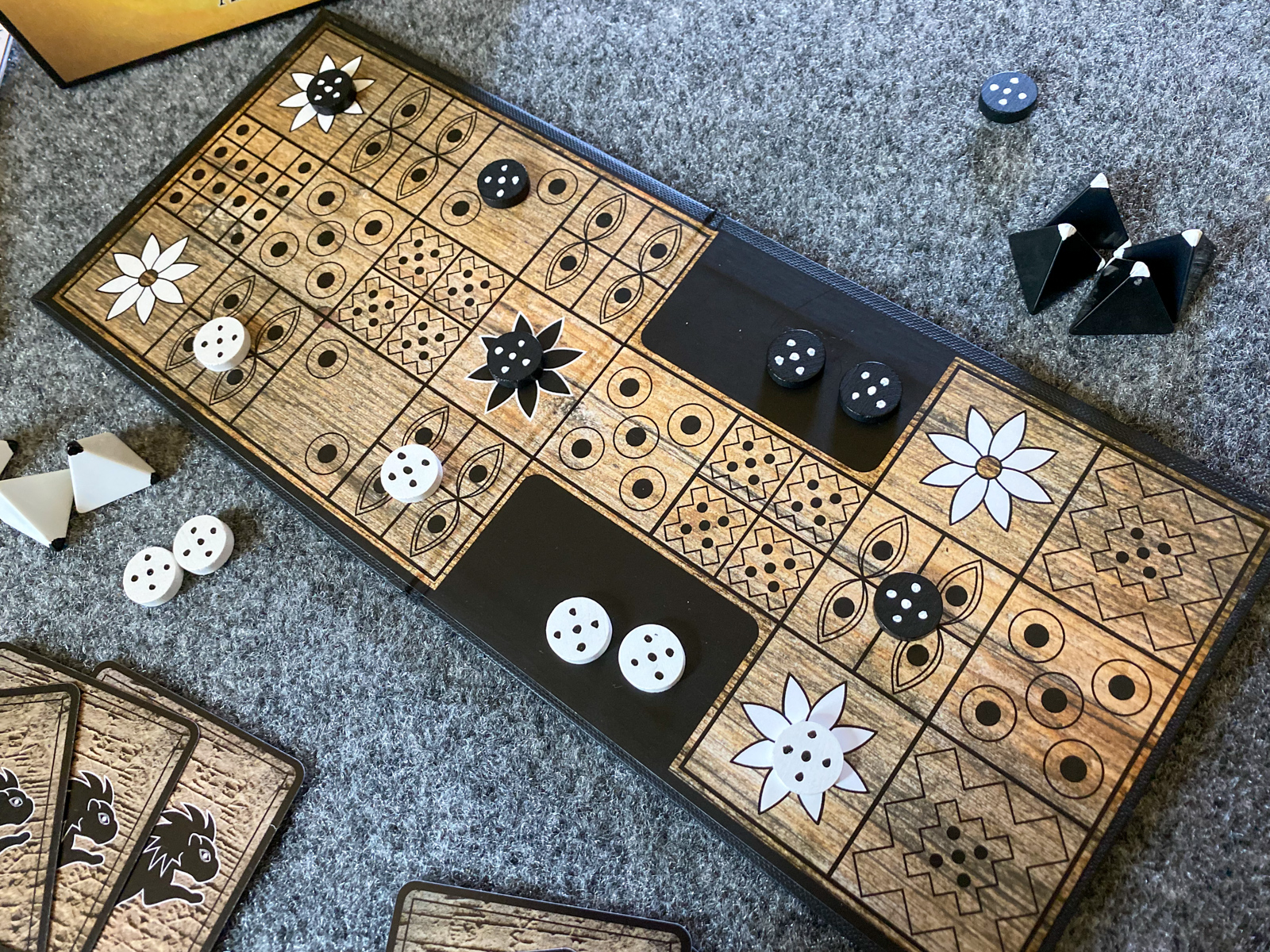 Overall, the added rules and rule combinations add a layer of complexity and variety to an otherwise straightforward and staid game. The ibex and lion decks seem fairly balanced against each other, but I found that the bull deck won more often than not- the already combative nature of the middle track of the board combined with the bull’s considerable offensive capabilities make for a straightforward strategy for winning that is fairly effortless to settle into. I’m not ready to chalk my losses against the deck to balance issues just yet, but mitigating the bull’s abilities through careful timing of scoring and movement is definitely a necessity. I’d almost go so far as to declare the ibex deck as a natural foil, were it not for the bull’s Iron Spear card, which enables the player to attack any space behind one of three temple tiles in the middle track, including the black rosette and, yes, the throne, neutering one of the most useful cards in the ibex deck. (Editor’s note: The Iron Spear card is not actually intended to work on safe spaces as I mentioned, and the rules on the card will be clarified to clear up any confusion according to the designer). 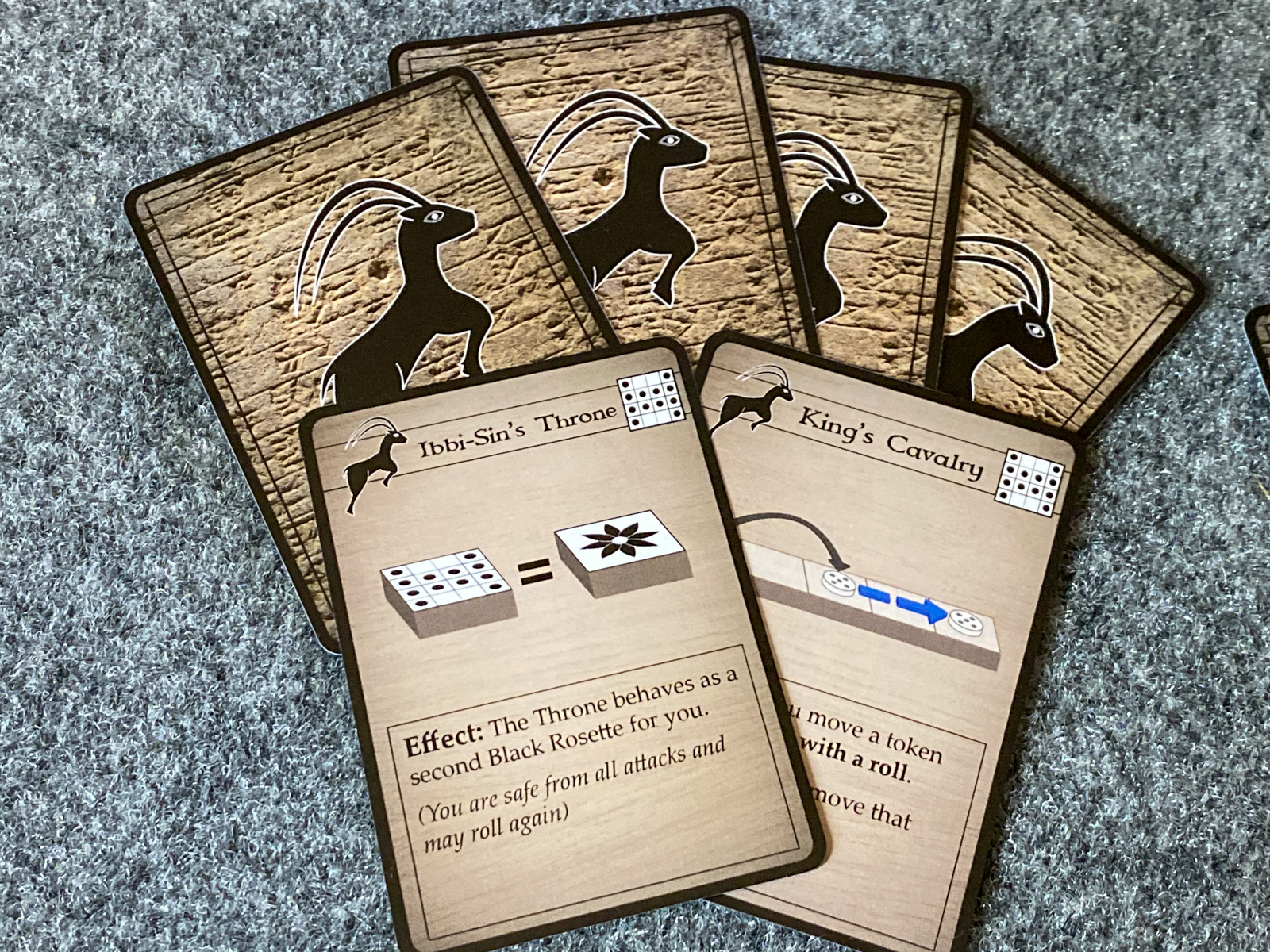 The Kickstarter campaign for URgency launches this week on May 22nd, and there’s already a page up. The $29 standard version of the game comes with a cardboard game board, eight dice ( a color coded set of four for each player), seven tokens for each player, and of course the four card decks. There will also be wooden board and premium wooden board versions at higher pledge levels in limited amounts, and a fourth rule deck, the Tortoise (with a focus on defense, naturally), to be added to every game as one of the earliest stretch goals. Some of these components will be exclusive to this Kickstarter campaign, and at such a low cost of entry for a timeless classic with a new twist, it’s hard not to recommend URgency.