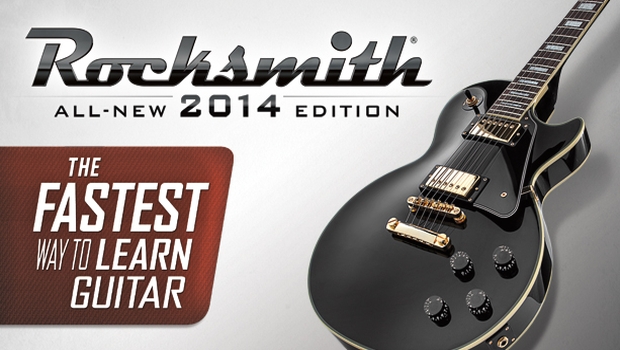 As a percussionist, I have never had a big desire to pick up the bass or guitar.  My father-in-law plays both, so at family gatherings I spend my time behind the skins.  Well, Ubisoft released Rocksmith a while ago, and my wife gave me a nice starter guitar from Excel that looks not unlike a Gibson.  I’ve spent a little time behind the strings, but admittedly the steep learning curve had me playing the same tracks just one too many times.  I’ve not given up, but I’ll say that my pace has slowed.  When I saw at the Ubisoft Press Event that Rocksmith 2014 was on deck, I knew that I had to take another run at it.

Not unlike Rock Band, in the original Rocksmith you spent your time playing the game with the original tracks (or absolutely horrible “As made famous by” tracks) blaring in the background.  If you miss notes you’ll be treated to plinks and clunks.  In that way, Rocksmith and Rock Band were a little like playing a Karaoke game.  Rocksmith 2014 wanted to go a different way.

During the E3 demo, the largest focus was on the new “Session mode”.  Rather than plinking along with your favorite song while the other instrument tracks play on, Ubisoft has built an AI system that reacts to how you are playing.  Organically, the accompanying instruments adjust to the speed and volume of the guitar.  What happens is rather interesting – it makes the song sound more like a you are just playing in your living room with your friends.  The AI “grooves” with you, letting you set the pace as the lead guitar.  Having the AI “react” to your playing felt like a cool way to really cut loose and play your way, rather than just chasing colored notes.  The team told us that there would be a great deal of customization for this new mode as well, all with little to no loading times.   Check out this little snippet:

Closing out the experience, the team rattled off some a pretty sweet list of tracks, with more than 50 being announced as we head through the rest of the year:

In the end, it looks like everything that caused me to stutter in my quest to learn to play guitar with the original Rocksmith product has been fixed and updated.  I’m ready to get back to those silly note matching minigames, Ubisoft – teach me how to shred!!  In the mean time, I bow to Jerry Cantrell from Alice in Chains to demonstrate Session mode at the Ubisoft conference.