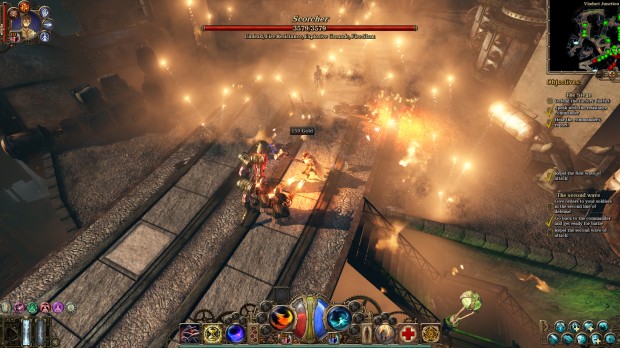 The team at Neocore Games were onto something with their hack-and-slash title, The Incredible Adventures of Van Helsing.  Focusing on Abraham Van Helsing, son of the legendary vampire hunter of the same name from Bram Stoker’s Dracula, the game was a steampunk twist on an old formula originated by the likes of Diablo.  Isometric, snarky, and absolutely gorgeous, Van Helsing grew as its audience built on one solid review after another.  Today I’ve gotten my hands on a early beta of the game to show you some of the massive improvements that we’ll see when The Incredible Adventures of Van Helsing II releases on April 17th, 2014.

The closed beta begins with Van Helsing (whether you are playing as Hunter, Thaumaturge or Arcane Mechanic class – all three are included this time) repelling an assault on a city.  Neocore Games are no strangers to making beautiful scenery, they’ve been doing it since their earlier titles like their King Arthur titles.  Van Helsing featured some fantastic artwork in the hulking 20GB payload, and Van Helsing II is clearly working to better that record.  The city is aglow with eerie neo-gothic green glows, misty catwalks, and clanking steampunk gadgetry.  Explosions and spells throw a cacophony of lighting effects on background and characters alike.  Don’t take my word for it – check out some of the video I’ve captured below:

As you can see, Van Helsing is charged with pushing back undead creatures that have burst forth from Ink Gates and nearby generators. General Harker has deployed mortars that drop enemies directly inside your defenses.  Enlisting help from the citizenry, we see some of the new non-linear functions in the game where players are asked to make tactical decisions and tackle side missions to bolster their chances of successfully defending the town.  You can also see that you will have significantly more skills at your disposal to do so.  Pushing the number from roughly 35 to over 200, Van Helsing II’s skill tree enables a staggering level of character customization.  Even Katarina, your corporeal companion has tripled the number of skills available to her. Throw in nearly quadruple the number of power-ups that you can attach to those skills and you can see that Neocore isn’t just throwing us a new story.

You can’t have a hack-and-slash adventure title without lots of delicious loot.  While that has returned, the number of weapons and armor sets has nearly doubled.  Class-specific weapons and armor has also made their way into the game, making each class feel unique beyond their power selections.

I’ve just brushed the surface of some of the new things in The Incredible Adventures of Van Helsing II, but even with just a few hours of play it is very clear – Neocore Games has given us a sequel that’d be worth it at twice the price.

Check out the array of upgrades for Van Helsing II below, and stay tuned for our full review as we run up to the April 17th release date on PC and Mac.