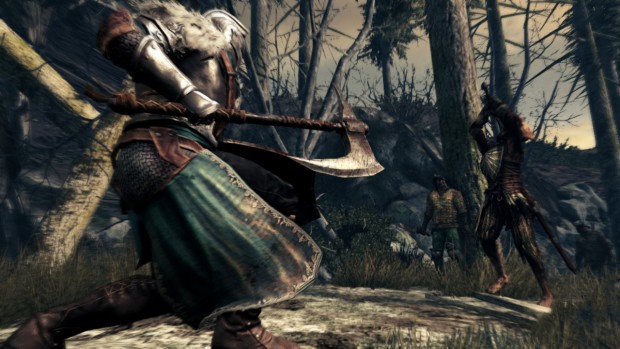 In the almost two years since its release, Dark Souls can be held accountable for the untimely deaths of many player characters as well as probably some controllers. It was a game that grabbed the hearts of so many and then proceeded to punish our love with frustrating death after frustrating death. The question becomes: can its successor Dark Souls II live up to what we have come to love and expect?

This year at E3 the guys at From Software and Namco Bandai rewarded us with a new playable demo of Dark Souls II. Over the course of the three days that I was there I logged about three to four hours with this demo and fished for as many answers as I could get about what to expect from the new addition to the Souls family. My greatest concern for this game was that the recent talks of “accessibility” meant they were going to make it easier, but as the many expletives that were thrown around that room this week can attest to, this game is anything but easy.

One of the first things that I noticed as I stepped into the demo was that the game looks and feels much sharper than the original. At first I was worried about the increase in the quality of the graphics would cause even more frame rate problems, but from what I played this was not the case and it seemed much more stable. With this increase in performance also comes a few other game play tweaks. There is now a “persistent bonfire warping” system which allows you to warp to any bonfire you have been to, not just specific ones. I was told that character generation and customization has been improved, and with the addition of a true dual wielding combat system it seems like there could be some interesting combinations to be explored. We must also say goodbye to the days of running into massive crowds of enemies and back stabbing them all, because they have removed the invincibility frames that were granted during many of the animations in the game.

The most significant change that I have seen from this demo was the improvement of the enemies’ AI. What this really ends up meaning is that now the enemies you fight are aware of situations and what is going on, like getting crushed by a giant bi-pedal turtle monster if you try to back stab him. Another example comes in the form of the demo’s final boss, The Mirror Knight, who was (as of this writing) undefeated by any person who had played the demo during E3. If he caught you trying to heal he would instantly charge you, he was aware of your distance or if you tried to run and would adjust his attack strategy depending on what you did. During the fight The Mirror Knight would plant his giant mirror shield into the ground and you could see the figure of someone trying to break out of it. As the person in the shield broke free a smaller currently computer controller enemy would come through and fight with The Mirror Knight. Once the game goes live this AI controlled enemy will be replaced by another player coming in to the fight.

From what I have seen in my time spent with the Dark Souls II demo it seems as though the difficulty has not been reduced like some people are fearing it would be. At this point in time I believe that From Software will be able to deliver us another wonderful and frustrating experience in which many of hours will be spent perfecting one’s play.