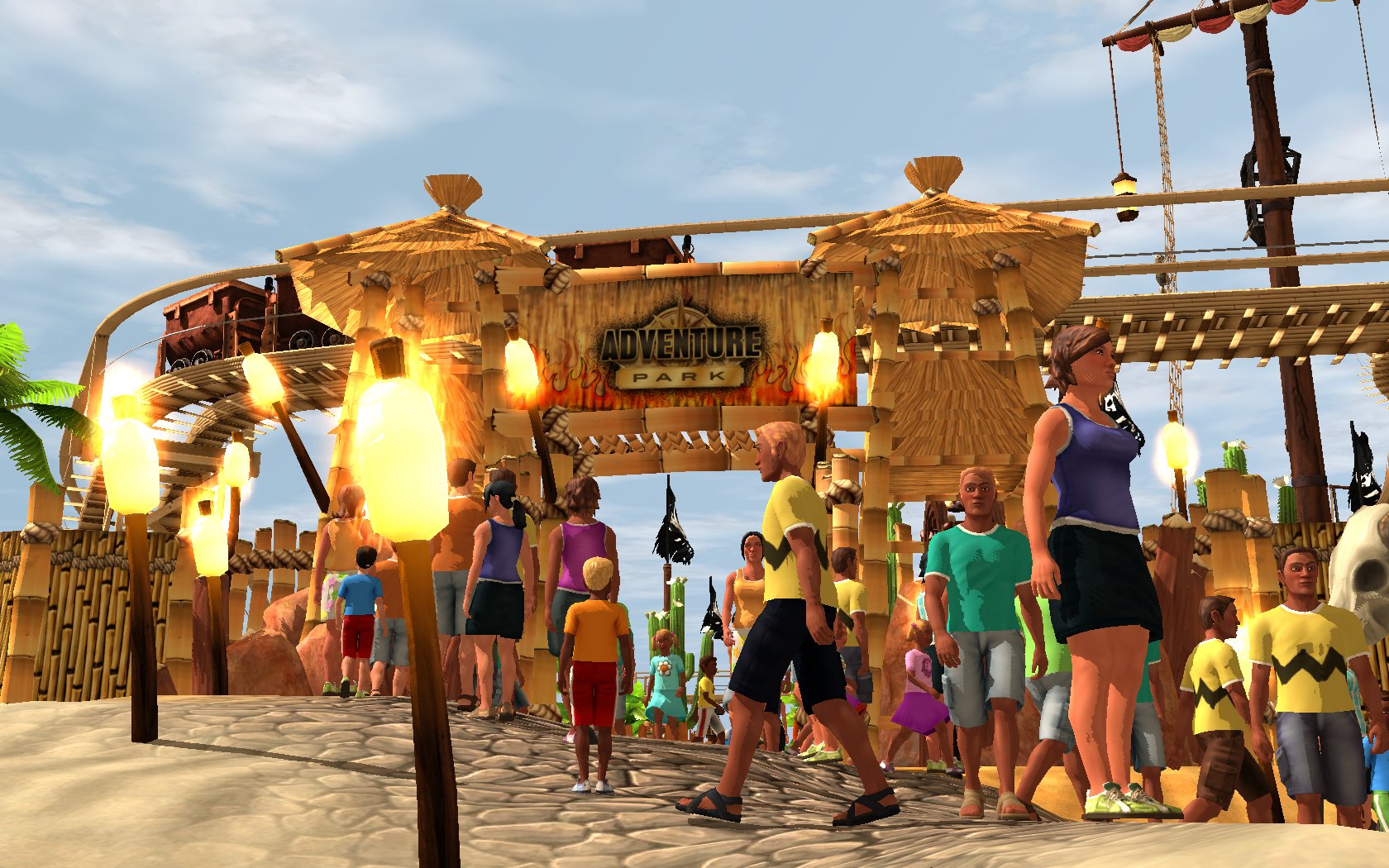 Three words hang over this preview. Three words that lept to your mind the moment you saw the title and grasped what type of game Adventure Park is. I don’t want to have to spend the whole time evading those three words, so let’s just get them out of the way right now: Yes. It’s a lot like Roller Coaster Tycoon. And that’s just fine with me.

With Adventure Park, German developer B-Alive seeks to revivify the micro-economics simulator–a genre that perished in the early aughts as gaming entered the Era of Console Supremacy. If you’ve played any of the old “Sim-” games, you know what you’re getting into: use limited funds to attract paying customers. Keep your customers happy and you’ll earn more money, with which to purchase better rides. Rinse and repeat. To keep your customer satisfaction levels up you’ll need to build and maintain a variety of attractions, food stands, and restrooms–all of which require upkeep. If your upkeep and expenses outweigh your income, you’ll find yourself deep into the red–though that never seems to really prevent you from building or maintaining your park, so there’s really no need to ever stop spending.

The Adventure Park I ended up building was, of course, pirate themed. Early rides include a revolving octopus and a Crow’s Nest drop ride but as your park becomes more popular, you’ll unlock bigger and better rides to build. Roller coasters are especially fun to design, though the interface could still use some work–it can be difficult to change the elevation of the track with any sort of precision. You can even “ride” your own creation by zooming in on one of the trains!

For the most part, the park management works–if you have the patience. Even on the “Fast Forward” setting, time seems to stand still. Wading through a month or two without building any new attractions–something you’ll have to do to refill your coffers–can be a bit of a slog, so hopefully B-Alive add some more options to speed time along.

[singlepic id=17046 w=620 h=350 float=]It’s been almost a whole decade since the last Roller Coaster Tycoon, but looking at Adventure Park you’d hardly think any time had passed at all. Adventure Park has got the look down pat. The word of the day is “colorful.” After years of nothing but dull earth tones, Adventure Park’s color palette is jarring, maybe even garish–and you will love it. Sure, the textures don’t hold up to close inspection, and the character models are repeated a ton, but I just don’t care. Everything in Adventure Park is as bright and saturated as any real theme park you’ve ever visited–and it is fantastic!

That’s not to say there weren’t some problems–this is a preview build, after all. Audio mixing was really rough–the bombastic “Pirates of the Caribbean”-esque music is defeaning by default and Passengers on roller coasters screech at pitches I’m fairly sure were intended to scare away the player’s dog. Those screeches come out at ear-splitting volume, which is a nasty suprise when you’re playing with headphones. Come to think of it, roller coaster patrons are pretty much the worst part of Adventure Park. They have a tendency to complain about the lack of pirate-y decorations around them as they crest the first hill of your roller coaster. I’d love to add thematic skulls and cannons for them, but I didn’t find any way to place decorations that high. Anyways, shouldn’t they be more worried about the 170 ft, 4g drop that awaits them as they pass the top of the hill?

The game interface could use a bit of polish before launching, as well. Tracking and panning the camera are quick, but any attempt to rotate around the Z axis takes so long as to be worthless. Another big problem? Every time I tried to select one of the tiny “build” icons on the right edge of the screen, I invariably accidentally panned the camera to the right about half a screen, making it hard to build. And once I finally got the camera back in place and brought up the proper building, I found placing it to be the devil. Rides only attract visitors if their entrances face a path or walkway, but good luck rotating them to the proper orientation.

These are significant flaws, and they do take a bit of enjoyment out of what was otherwise a pretty great experience. I’ve never been a particular fan of games like SimFarm or Roller Coaster Tycoon, but I’ll be marked a scurvy dog if Adventure Park wasn’t a charming little romp through financial ruin. If B-Alive can get the interface issues sorted out it’ll be smooth sailing, mateys!