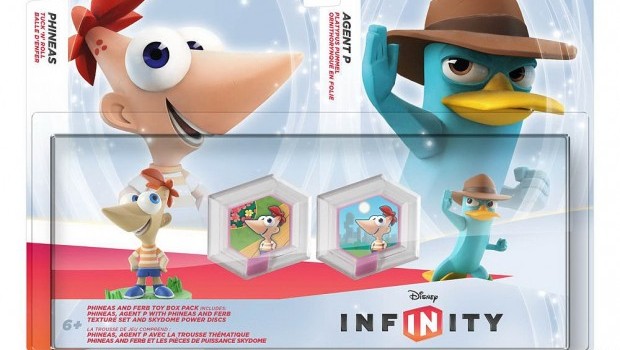 Anyway, my daughter is a huge fan, so she was of course very excited to tear into Disney Infinity’s latest set of characters from the massively popular Disney show. The latest two-pack combines Phineas and Agent P (the platypus I mentioned earlier), plus a couple new Power Discs, for some more Toy Box fun. Shame there isn’t an additional Playset to go with it.

Just like all of the other Toy Box-exclusive characters, Phineas and Agent P are only able to run around in user-generated worlds and games — no sending them to Monsters University for college or anything. Phineas and Agent P both have different weapons to use (a baseball cannon and a fedora, respectively), but they still feel fundamentally similar to pretty much every other character you can buy.

The Adventures each character comes with is actually pretty cool, though. Phineas brings with him a weird tower-defense-y pinball thing, while Agent P tasks players with collecting as many orbs as possible while the game constantly shifts around them. They’re pretty neat diversions, but they’re not worth the price of admission by themselves.

After the release of Phineas and Agent P on Tuesday, April 1st, it looks like there aren’t going to be any more figures coming out until the next generation of Disney Infinity games are released — if the amount of statues featured in the Hall of Heroes is any indication. Still, it’s been an interesting year for Disney Infinity, and I look forward to finding out what characters we’ll get to play with in the sequel.