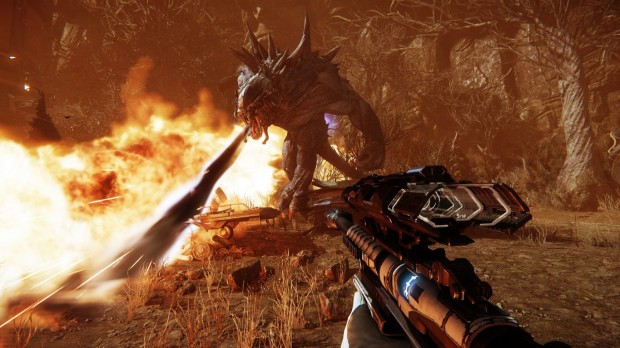 For a game being made by the creators of Left 4 Dead, you would expect Evolve to be on the tip of everyone’s tongue before PAX. Surprisingly, it was far from it. But it is clear that 2K/Take-Two and developer Turtle Rock Games wanted to change that as they set up a massive booth in the heart of the show floor that featured a horrifyingly huge monster with fake drool hanging out its mouth. Scary inanimate objects aside, their plan was working as a humungous line immediately formed for a hands-on demo once the show began. When you actually get to play it, though, you realize that the wait may just be worth it.

Evolve is a game that wants to take one of the most exciting parts of playing a game, the boss battle, and turn it into a full experience. There are five players in total, one of which plays as the Goliath. The Goliath is a large, brooding baddie that makes its way around the map chomping up tiny animals which helps it, well, evolve. Once you begin your evolution, you can allocate three skill points into four different skills which range from a pounce that inflicts tons of damage to an enemy on the opposing side of your leap to your basic rock throw, similar to the one you performed as a Tank in Left 4 Dead.

Also similar to Left 4 Dead is how the Goliath controls as it is very reminiscent to the Tank’s movement. Admittedly, the Tank’s movement was far from perfect but Turtle Rock has tweaked it just enough to make it feel not only accessible, but fresh and new. Pouncing on the helpless little peasant enemies is a ton of fun and the evolution aspect adds a certain layer of strategy that was never found in Left 4 Dead. Of course, your ultimate goal in any multiplayer game is to win. As a large Goliath, you do that by either killing all your opposing hunters or, instead, taking out a generator found on the map. You do that by attacking the generator, but that also leaves you vulnerable for hunters to take shots at you and knock down your health. If the Goliath dies, it is game over and a victory for the “good guys.”

The Hunters are a group of attackers which are split into four classes. Those four classes being Assault, Support, Trapper, and Medic. While the Medic and Assault are pretty self-explanatory, the Support class has a special shield gun which allows him to shoot cloaks of invincibility around all his teammates. Unfortunately, the Support class cannot shoot himself with that nice gun. He also has a special skill that lets him shoot an air strike down upon the powerful Goliath.

The Trapper is possibly the most interesting class as he brings a nice harpoon gun into battle. This harpoon gun allows him to shoot a leash into the Goliath that makes him stay within range of the hunters. His most unique ability comes in the form of a dome that he can place in a certain area. Once the dome is placed, everything within it is stuck for a little while leading to insane mayhem.

Turtle Rock is clearly drawing from their Left 4 Dead roots with some of the ideas in Evolve, but they have also built upon them in ways that just plain make sense. They are forming what looks to be yet another powerhouse in the multiplayer-based shooter genre. The only remaining question is will it catch on like their previous franchise?