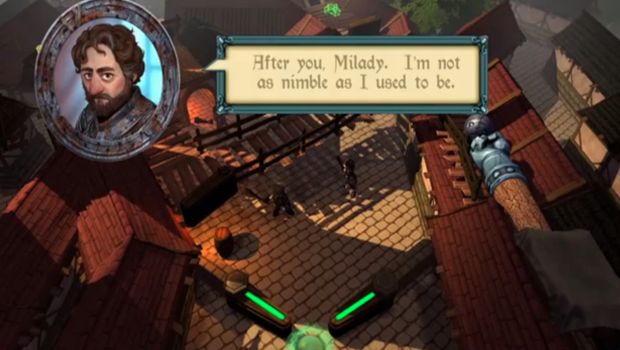 I’ve never liked pinball. Sure, I’ve had the odd game or two decades ago when I was 3 feet tall and needed something to do in the local Laundromat while my mom washed the clothes. But generally speaking, the frustrations of pinball always outweighed the joy for me. Launching your ball at that odd angle so it shot directly between your paddles (instant loss), your ball getting wedged in some impossible corner where you needed to lift and shake the entire machine in order to free it (instant back spasm), and other such quirks soured the experience for me in a way I never quite got over. Although I recognize some people consider these flaws happy accidents, I thought it was a waste of money better spent on Street Fighter or any other arcade cabinet in walking distance, a grudge that followed the game style all the way to its digital variants.

Hence, when Rollers of the Realm, a pinball role-playing game of all things, became my absolute favorite game of E3, I it placed me in an ironic spot of embarrassment and hypocrisy. But facts are facts and the truth is the truth…. Of the many games I wanted from the show, Rollers of the Realm was the one I wanted the most.

The reasoning of how this quirky little title swept me off my feet is pretty straightforward: it’s simple, it’s smart, it’s surprisingly well crafted and it takes a style of gameplay whose past “advances” have always been mostly esthetic and makes it something new. What makes Rollers of the Realm brilliant is the same thing you’d think makes it ridiculous, it’s a pinball RPG. But, once you start playing it you’ll discover almost instantly what a frightful combination of addictions it actually is.

Since I didn’t actually progress far enough in the narrative (yes, this pinball game has a narrative) to get much of the story, I’ll keep it simple. You begin your journey as a roguish street urchin just trying to survive when some dastardly bandits kidnap your loyal canine companion. Your pursuit of these villains quickly brings you into the company of other talented vagabonds who join you in your quest for various reasons, but ultimately for the sake of doing good for the beleaguered land.

This brings us to the gameplay, and man… in this does the game shine.

Each character in your party is represented by different pinballs, whose size, shape, behavior and appearance is determined by their class and personality. My knight, for example, was a large metallic ball capable of doing massive damage to on-stage foes and destructible objects. However, he (it?) was too large to fit through smaller passageways and hidden routes designed for a rogue. (Also his controls were wobbly… because he was a drunk.) Switching between party members in instances like these is done by cradling the pinball/character you’re currently using behind one of the two main paddles located at the bottom of the stage, and then toggling through your roster. The condition of these main paddles doubles as your party’s health, which is where the additional strategy comes in.

In battle situations you’ll face two primary threats: losing all your pinballs to the bottomless abyss at the belly of all pinball games, and having your two main paddles destroyed, making the first danger all but inevitable. The foes you’ll face in the game are fully animated mobs, who attack your party indirectly by assaulting your primary paddles and raising troublesome pinball re-routing defenses. To counter this, your pinballs have variations of all your standard RPG class abilities, which are activated the same way you change your party.

Healer pinballs can resurrect other units lost to the abyss, as well as recover the health of your damaged paddles. Knights can raise their shield, blocking the abyss all together for period of time. And when rouge pinballs hit opponents from behind it counts as a backstab, doubling damage… and so on. These abilities can be further augmented by purchasing equipment, leveling your characters, and exploring the maps for treasure and hidden paths.

The options were only starting to open up when I had to pull myself away and get back to the Expo, but I’ve missed it ever since and anxious for its estimated fall release. Congratulations RotR… you’ve made me a believer.