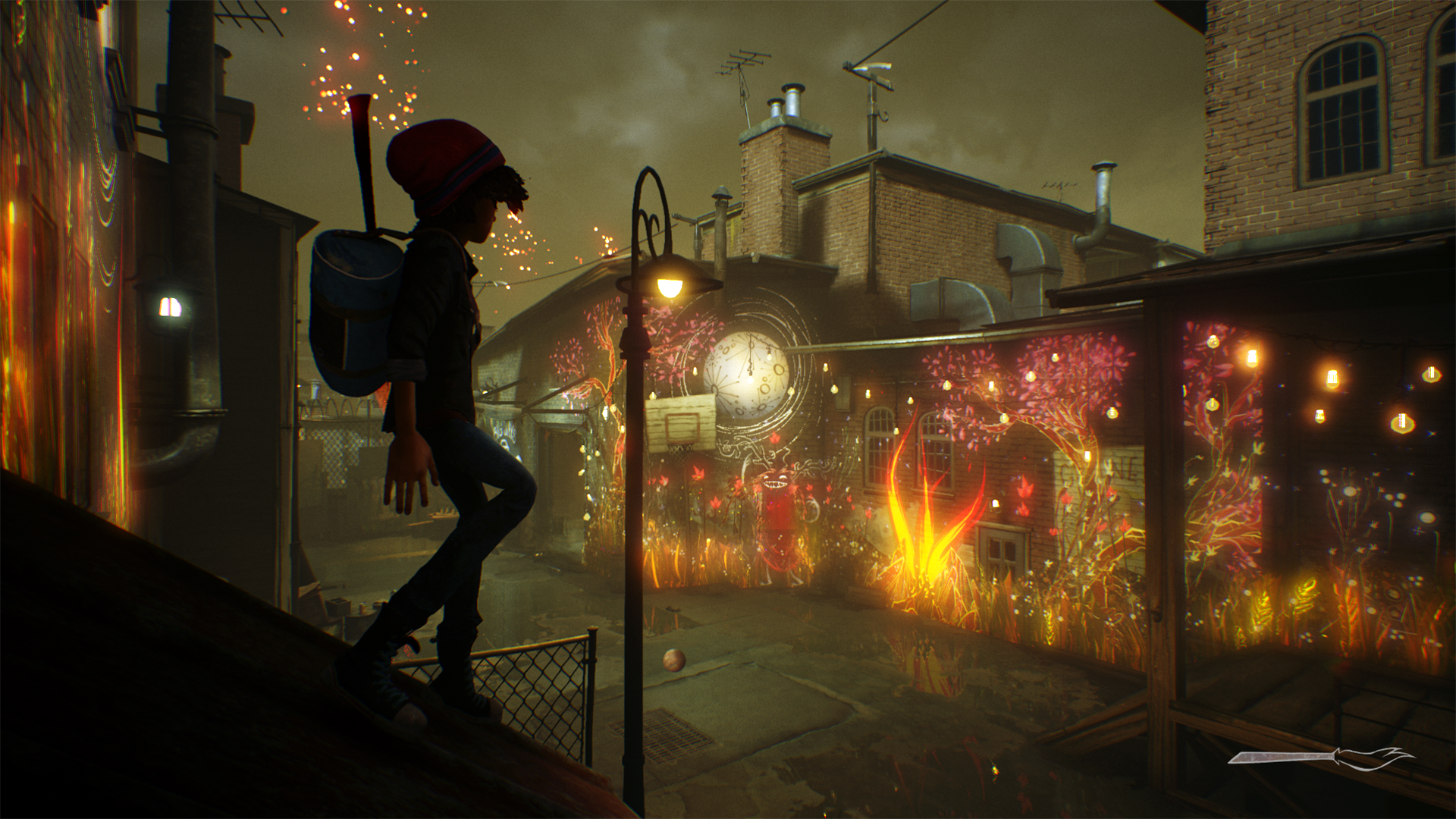 Being a teenager is hard enough, but being a teenager in a dying, mostly abandoned town, watching the place you call home fall into disrepair and darkness, is something else entirely. Meet Ash, the protagonist of Concrete Genie. This bullied, artistic teenage boy is trying, desperately, to make the world a better place. His hometown of Denska is struggling; most of the adults have moved away, the other children are unsupervised and bored, and the lights are, one by one, going out. Fortunately, Ash has a hidden power: an imagination which allows him to create glittering, moving paintings, and bring painted, magical creatures to life.

Concrete Genie features two distinct art styles; the game itself is rendered in 3D with an almost stop motion feel to it. The developers intended it to feel hand crafted, and the larger world takes on a darker, dreary feeling, befitting the status of Denska. Ash’s art, on the other hand, is filled with whimsy and curving lines; it is literally “living paint,” and blades of grass blow in the wind, suns radiate light, and painted stars twinkle in the darkness. Ash is doing more than just simple graffiti; his paintings have the power to dispel the darkness, bringing light, both figuratively and literally, back to the town. When Ash paints over dark areas, the lights of that building literally turn back on, bringing hope to dilapidated areas.

Not everyone in Denska has the imagination of Ash, however. Ash is forever pursued by bullies, who the player will have to outmaneuver, distract, and sneak around in order to finish lighting up the town. The story begins when a group of boys corner Ash and steal his sketchbook, tearing out pages and scattering his precious creations to the wind. By finding and recovering these pages, Ash will have access to more designs to paint with, but it won’t be easy. The bullies don’t let up easily. Ash will have to climb onto rooftops, whistle to draw bullies away from an area he needs to be in, and solve puzzles in order to outsmart his pursuers, who are bored and generally unhappy that Ash has a purpose, something to do, when they do not.

Fortunately, Ash won’t have to do this on his own. There are certain areas where Ash will be able to literally create his own friends: genies. Genies are two or four legged monsters which the player can customize based on which sketchbook pages they’ve recovered. You’re able to take your time in creating these two dimensional friends; they can be long and tall, straight or curved; they can have wings, horns, multiple tails, or even trail little willow branches. You can combine any number of features in any number of ways, and your only limit is how many designs you’ve recovered and your own imagination.

Genies are the friends Ash wishes he had in real life; they’re full of personality and energy, bounding across walls, requesting Ash paint apples or trees nearby, and they can even occasionally interact with the 3D environment. One asked for a high five, one kicked a soccer ball back to Ash; at one point in the demo, two red genies combined their powers to breathe fire at a pallet, burning it up and allowing Ash access to a previously blocked area. It’s amazing how quickly I felt a bond with these scribbled monsters, I couldn’t help but smile as they followed me across walls and around corners, with goofy faces, odd shapes, and caption-bubble requests. They also serve as a great warning system, freezing and becoming just another bit of graffiti when the bullies, who lack the imagination to see them for what they really are, approach.

Each part of town is broken up into different stages, and you’ll need to paint the walls in order to light up most of one stage before you can move on to the next. Those who doubt their artistic abilities need not worry; the living, glowing paint makes everything look amazing. It’s easy to layer trees, stars, and fields of grass to make a stunning, vibrant scene. Paint a few butterflies near a tree and watch their leaves shift and bloom with flowers, while the fire brush creates cozy, flickering campfire flames which you can’t help but want to toast a marshmallow over.

Concrete Genie is an amazing visual treat with a heartfelt, thought provoking story at its core. I’ve no doubt that the glowing, living paint will be able to draw out the inner artist of anyone. Concrete Genie is a single player action RPG which is being developed exclusively for the PlayStation 4 by Pixelopus. While it does not yet have a release date, we expect to see it sometime in 2018.