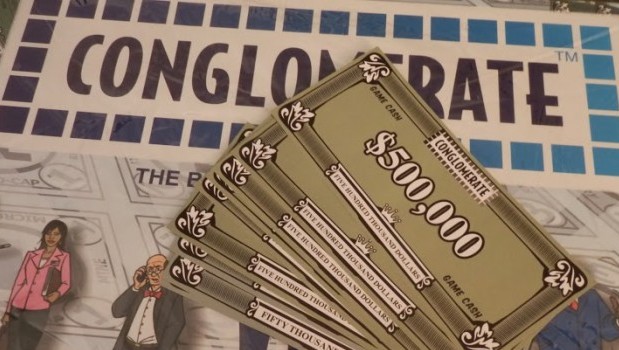 In 1904, Elizabeth Magie patented a game about the evils of capitalism called The Landlord’s Game. Whoever earned the most money won, which actually makes capitalism sound pretty good to me. In 1935, Charles Darrow stole her idea, sold it to Parker Brothers as Monopoly, and made MILLION$, leaving Ms. Magie destitute. (That’s what she gets for calling capitalism evil!) In 2003, Monopoly, now owned by a German duo called the Hassenfeld Brothers, officially jumps the shark with the release of Monopoly: SpongeBob SquarePants Edition. (Who lives in a pineapple under the sea, does not pass go, and does not collect $200?) In 2013, a new publisher called Port Supply Co pays homage to the old classic: the result is CONGLOMERATE.

This game is old school. Roll the dice. Advance your pawn. Do what it says on the space you landed on. THEN THE FUN BEGINS. Buy an available Business License, either because you want it for yourself, or TO KEEP IT FROM YOUR OPPONENTS. Then, advance Product Tokens from one side of the board to the other, as they are transformed from raw materials into retail products. Buy, sell, trade, or EXTORT your way to a better position. The game ends when 1) one player bankrupts all opponents, or 2) your group decides on a sensible house rule for endgame.

WHAT’S INSIDE THE BOX

The copy I played was a pre-release/beta version. The components are due to get an upgrade before the game goes retail, but they already look pretty good. Aside from the board, you get a pair of dice, 8 player pawns, 25 color- and number-coded Business Licenses, a deck of Professional Service cards, and oodles of fake money. There were some minor issues – the cards have a summary of their effects printed on them, instead of the complete rule, and the cash denominations are all in shades of olive green that look too similar, but I expect these will be tweaked before release.

The printed rules, on 4 single-spaced inkjet-printed pages, are kind of a mess. My group found many omissions and one glaring contradiction. I’m not worried about the rulebook, because it will get ironed out before release, and it isn’t much worse than a lot of “finished” games on the market.

A FEW WORDS ABOUT THEME

CONGLOMERATE’s Kickstarter page makes numerous references to “other popular business games” without naming names, but it is clear they are inspired by Monopoly. I can’t help but make a direct comparison between the two games.

Unfortunately, CONGLOMERATE lacks charm in one important area: Properties in Monopoly are named after real locations in Atlantic City (residents of that city must be so proud) but CONGLOMERATE’S Business Licenses are generic — they are identified with a color and a number, but they have NO FLAVOR WHATSOEVER. I hope this is changed in the retail version.

WHAT MAKES THE GAME UNIQUE

In the 21st century, a game that relies on roll-and-move and last-player-standing is unusual, if not unique. If Monopoly had never existed, CONGLOMERATE might appear unique, but given how influential Monopoly has been, including these old mechanics in CONGLOMERATE is like a trip down the tedious parts of memory lane.

Today’s gamers sometimes complain about the randomness in Settlers of Catan, but Catan’s dice don’t dictate where you can go or what you can do when you get there. CONGLOMERATE suffers from the same flaw as Monopoly and all the roll-and-move games that followed it — a few unlucky rolls leaves you in a weakened position through no fault of your own, and the game can be frustrating and boring. There are opportunities for the designers of CONGLOMERATE to freshen up the roll-and-move mechanic, perhaps by giving the player an opportunity to make decisions before or during the dice roll. I hope the designers will consider revising this part of the game before finalizing the rules.

The last-player-standing is another widely reviled part of Monopoly that was retained in CONGLOMERATE. What are your friends supposed to do after they’ve been eliminated, and the rest of us still have some playing to do? The game supports up to 8, so there may be as many as 6 waiting on the sidelines. Fortunately, this has never been a problem in my house. EVERY group I’ve played this with has insisted that we house-rule the endgame conditions, so that we stop at the first bankruptcy and count up our cash to crown the winner. Various official and unofficial Monopoly house rules do something similar, so it is surprising that the designers of CONGLOMERATE didn’t think to adjust their rules accordingly.

WHAT MAKES THE GAME FUN

We really did enjoy the business portion of the game: buying and selling Business Licenses, and moving Product Tokens along the chain from the Mine, through Manufacturing, and finally to Retail. With too few players (say 2 or 3), everyone can expect to own their own supply chain without a lot of wheeling and dealing, but with 4 to 5, haggling and deal-making become really important, and really FUN. The designers clearly put a lot of effort into this part of the game, and it pays off. I have yet to play with 6 to 8 players, but I imagine the negotiation would be TOTALLY INSANE (though the length of the game would be equally insane).

My group also really liked the Professional Service cards. Unlike the Chance and Community Chest cards in Monopoly, which affect the player who draws them and go away, the Professional Service cards stay in your hand until you decide to play them. Each one has two different effects, and you have the flexibility to choose which one to use. They can be sold and traded like any other commodity, and they enable truly CUTTHROAT behavior that is a staple of the corporate world, but is generally lacking in Monopoly.

The best moment I’ve experienced in CONGLOMERATE was when the player to my right, who had stubbornly refused to trade with me the whole game, was nearly bankrupted by paying some very large taxes. I made a lucky roll and got to choose two Specialist cards. He offered to give me the two Business Licenses I wanted in exchange for a Lobbyist card, which would get him off the hook the next time the IRS came by. So for my two specialists, I chose a Lobbyist (which I traded to him for the two Licenses I needed), and a Crime Boss, WHICH I IMMEDIATELY USED TO ELIMINATE HIS LOBBYIST from his hand. I went from being in poor shape to being a contender due to a combination of a good dice roll, some shrewd negotiation, and PURE RUTHLESSNESS.

WHO SHOULD BUY THIS GAME

Good question! The designers of CONGLOMERATE went straight from the business world to publishing their own game, without paying dues by playing Catan and Puerto Rico for years like the rest of us.  They are not hobbyist gamers, and CONGLOMERATE does not appear to be intended for hobbyists.  Their desire to update Monopoly is admirable, and the new mechanics ARE fun to play with, but they left in the old mechanics that hobbyists loathe.

CONGLOMERATE is a solid homage to Monopoly that introduces some fun and innovative new elements.  However, retaining the reviled roll-and-move and last-man-standing mechanics is going to make this game a hard sell for sophisticated gamers.  If you’d like to take it for a spin yourself, you can pick it up on Amazon for $10 off.