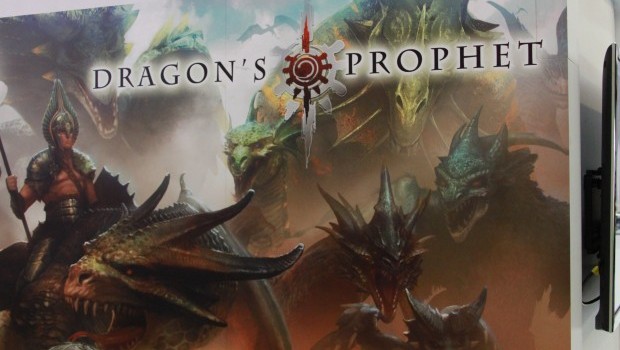 When I showed up at Sony Online Entertainments booth, I looked around and I saw what seemed like a lot of the same. They were showing off the new Planetside 2 Patch and DC Universe Online for the PS4 but also, up front right by the main entrance to the showroom, they had another game which I had not heard of — Dragon’s Prophet.

Dragon’s Prophet is a free to play fantasy MMO that puts you to the world of Auratia where, for thousands of years, the epic wars between the dragons who rule the skies have almost plunged the lands into chaos. However, after these many years of war a greater evil has appeared and it is your job to capture, train, ride, and fight hundreds of unique dragons in hopes of saving Auratia. All across the lands that were shaped by the dragons, you will hunt down and capture many different types of dragons which will then fight along side and serve as your mount, as well as provide you with special skills and abilities to aid in your quests. Some of the first things I noticed about Dragon’s Prophet was its focus on the dragons, its action based combat, and their use of microtransactions.

The dragons I saw while playing this game all varied quiet a bit, from giant majestic flying dragons to short and stubby mean looking dragons — the range of beasts in this game was quiet vast. Also, as you capture dragons they come with different skill sets which are decided randomly, so the chances of getting good skills and bad skills are quite close. Now at first this seems kind of like a tedious grind-fest of trying to get the specific skills and having to catch tons of dragons to get them, but with the implementation of a breeding system which allows you to combine dragons to get specific skills on one dragon, it helps a bit. There are still skills that can not be breed, so some grinding will be necessary. The upside of the dragons is that the entire system does seem like it is very deep, so even though there may be some grinding involved to get those perfect skills, it should at least be interesting with the breeding and combat systems.

In combat you can bring one dragon who will aid you in combat — whether he is a buff-filled support dragon or a super-aggressive attacking dragon is all dependent on how you build them. But what I found neat about the combat is that they went with a more action-based system where it uses a auto-target and combo system that seems to give players a higher level of control and some variance from the typical way most MMOs play. It was nice because the combat felt fluid as you go through your different combos.

One of the most important thing to me about a free to play MMO is how they plan on using microtransactions. It always seems that everyone is always fearing the dreaded “pay to win” micro transaction set up, so I naturally spent as much time looking at their implemented store and asking as many questions as I could about how they would use microtransactions. Sadly, at my time of playing the store did not seem to be fully implemented but what I did see is a lot of costume items, and the general convenience items that don’t seem to be game breaking. Also, a lot of the things that I did see in the store seemed as though they were at least decently priced and not as outrageous as some items you see in these free to play cash stores.

I feel like the hour I spent with Dragon’s Prophet was way to brief and when I get more time I plan on signing up and participating in the open beta that is currently going on. The dragon system alone seems as though it will be deep enough to keep me entertained for awhile and that’s just one of the many things the game seems to have to offer. Dragon’s Prophet is currently in open beta and is scheduled to release sometime in 2013.