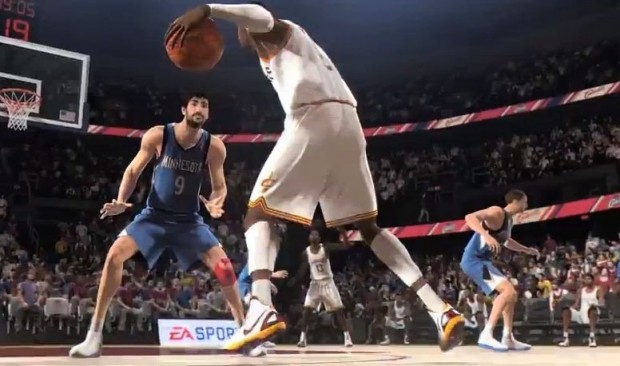 What we saw of NBA Live 14 at E3 this year was a major focus by EA on rebooting the NBA sports franchise for next-gen consoles.  We got to play a bit with a tech demo behind closed doors, and what we saw was pretty impressive.

The new engine showed off “Bouncetek” – a dynamic, physics-based dribbling simulation system which predicts the direction and velocity of the basketball relative to the player to create natural and realistic motion.  Coupled with 1000 new animations and the ability to change the direction of a dribble by a flick of the analog stick, the new system gives a great deal of control over how one plays on the court.  An NBA Live representative stated that the game “allows players to play like they want to.”

NBA Live 14 is also driven by a statistic-tracking service from Synergy Sports Technologies, which allows EA to update actual player information and game stats in “real time” – the same data used by all 30 NBA teams.  This shows a huge commitment from EA to provide a dynamic experience for their players and gives fans a unique way of tracking their favorite teams.

There wasn’t much to the demo other than a half-court, a player, and a basketball to test out the new technology.  Hands on, it felt pretty responsive and fluid, and after toying with the new dribbling system, it was obvious the possibilities that the dribbling control presented with how each person plays.  We’re definitely interested in what this new engine will offer in terms of actual team gameplay, but for now, we’ll have to wait for a more finalized product.

NBA Live 14 does not have an official launch date and will hit shelves exclusively for Xbox One and Playstation 4.