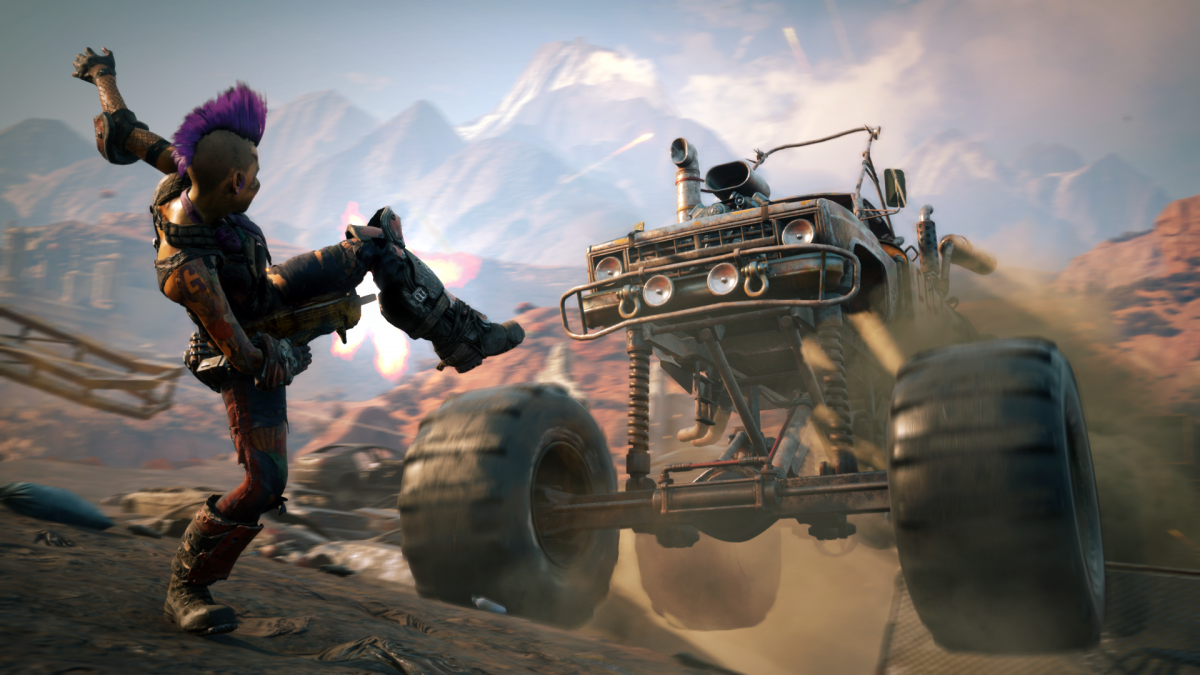 Bethesda, Avalanche, and Id have combined forces to give you a new open world, post-apocalyptic shooter in Rage 2. I got a quick and dirty look at the upcoming game, and it looks like it’s going to be one hell of a ride.

While there were a lot of post-apocalyptic games showcased at E3, Rage 2 made one of the biggest impressions on me. First, without a doubt, it’s the goriest game I played at E3. Blood splatter is a common sight in this game, often times spraying everywhere. It added to the cartoonish but gritty world of Rage 2, and I thoroughly enjoyed it–though if violence isn’t your thing, Rage 2 probably isn’t for you.

The playable demo had me fighting my way through groups of Goon Squad (the 80’s punk looking guys visible throughout all the marketing) to lower an ecopod. The good Dr. Kvasir has tricked the system into thinking that you’re the President of the United States, so the security system consistently addresses you as such, making for a fun addition to the shooter.

While shooting your way through fights was fun, the absolute highlight of Rage 2 was the superhero mechanics; you can blast people away from you (sometimes ripping them apart), as well as launch yourself into the air and land DRAMATICALLY, sometimes tearing people apart in the process. In addition, there’s a meter that, when full, allows you to go into Overdrive, which is exactly as great as it sounds. Your guns are more powerful, you take less damage, and you become a beast in battle.

The world is very reminiscent of Mad Max, and while the demo didn’t feature any vehicles, I can’t wait until I get the chance to drive through this terrain on my own and relive Fury Road sequences for myself. The trailer promises an open world, with the ability to explore and adventure to your heart’s content.

The violent, chaotic world of Rage 2 guarantees a kick-ass time. If you like your games violent with a side of mayhem, this game will likely be straight up your alley.