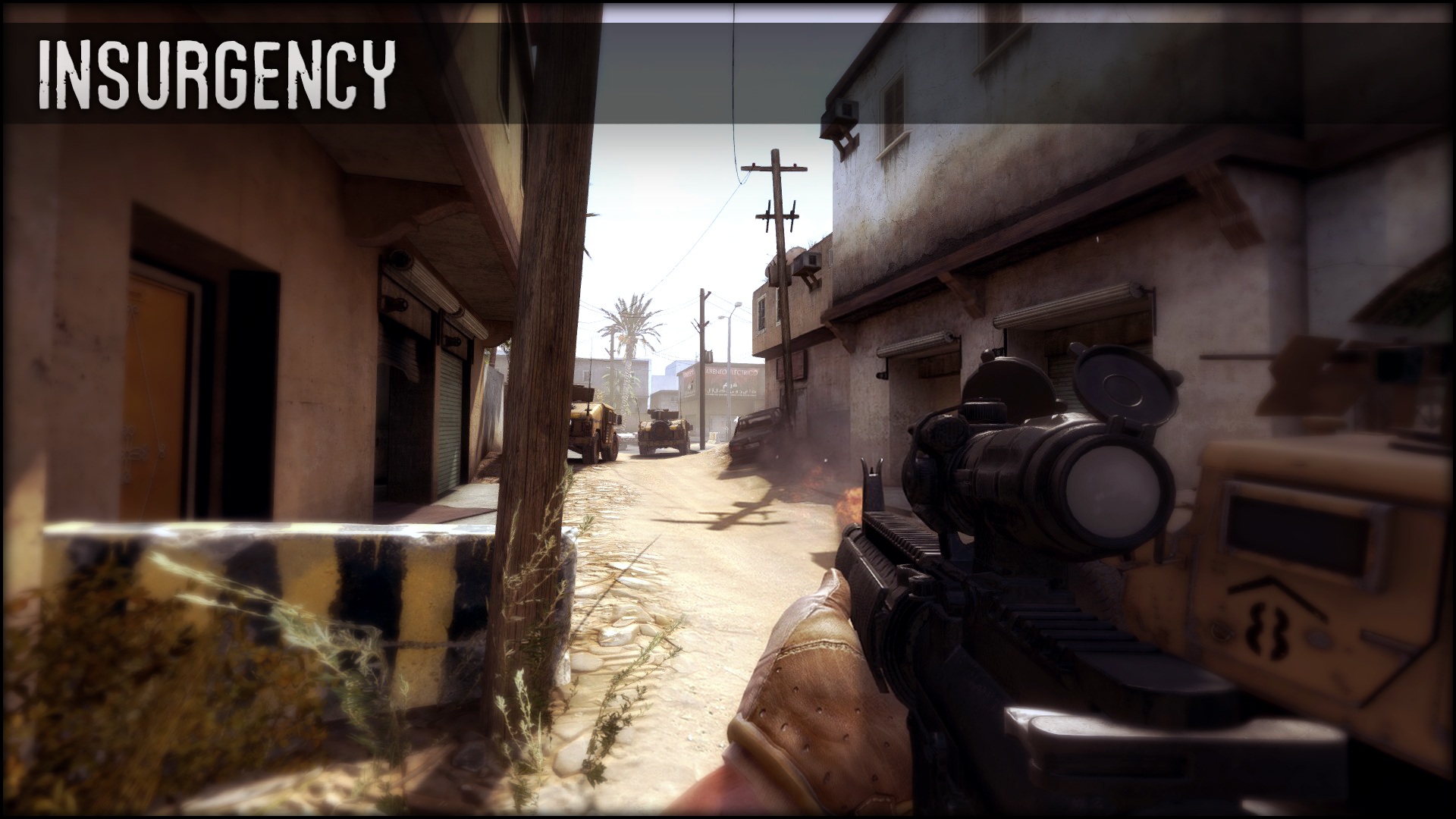 Think of your last experience playing a first-person shooter. Was is a little lacking? Perhaps you got stuck with selfish teammates who ignored the objectives or maybe the lack of realism (like surviving dozens of direct hits thanks to quickly regenerating health) made things a little too easy. New World Interactive is looking to create a shooter without these problems with Insurgency, their first release. Insurgency has its roots in a self-published Half-Life 2 mod from 2007 called Insurgency: Modern Infantry Combat. Using Valve’s Source engine, the Insurgency team created a multiplayer tactical modern shooter that focused on realism, encouraged teamwork, and earned the title of Mod of the Year in the process. Now it’s a few years later, and New World Interactive hopes to repeat the success. Insurgency is due out this summer, but I got a chance to play with the alpha version ahead of the official release. Can it live up to the expectations set by its predecessor?

Like most first person shooters, the focus of Insurgency is multiplayer gameplay.  The game will also include “training” and “shooting range” single player [singlepic id=11395 w=320 h=240 float=right]practice modes, but these were not playable in the alpha. The multiplayer, on the other hand, was good to go.  Since the game is still in alpha, only a handful of servers were available so I only got to try out three of the four online game modes: Firefight, Hunt, and Occupy.

Firefight is essentially a map domination mode, with five capture points spanning the space between your spawn and the enemies’. The objective is to capture all five points to win the round, which will require venturing dangerously close to your opponents’ base. If neither team manages to wrest control of all of the capture points, the team with the highest score at the end of the five minute round wins. The challenge starts off easily enough; it’s easy to capture a flag near your spawn point when there are no nearby enemies. But the pace of the game quickly picks up as fighting concentrates over the last few flags.

[singlepic id=11394 w=320 h=240 float=left]Occupy is a similar capture-the-flag based mode, with three capture points instead of five. Each team has a point near their spawn that is relatively easy to capture and defend, so much of the fighting takes place over the coveted middle flag. Occupy matches last twelve minutes, giving plenty of time for the tide of the battle to shift. The bigger your team’s lead, the longer your spawn time becomes which helps to keep games competitive and fast-paced until the end.

And when I say fast-paced, I mean it. You’re always only a few bullets away from death, so quick reflexes are a must. There is no running away to cover to let your health regenerate; if an enemy has you in their sights, you either kill them first or you’re dead. Since the servers I joined tended to use realism mods, I’m not certain how much of this is actually present in the base game.  Either way, respawns take only a few seconds to match the pace of the game, giving you a chance to conquer the initial learning curve without too much frustration.

[singlepic id=11393 w=320 h=240 float=right]The co-op “Hunt” gameplay is also fast paced, but the bouts of action are interspersed with time for your team to regroup and strategize. The Hunt mode tasks you and your teammates with finding and eliminating hidden AI enemies. The enemies are very deadly and they outnumber you, which makes teamwork a must to win.

The game is great at encouraging teamwork and objective play in all of its modes, with capturing flags helping your score (and your team) significantly more than simply getting kills. The only exception may be Elimination, which I didn’t get to play. In this mode, the teams fight to recover and item of interest and transport it to their base. But as the title suggest, the game can also be won by simply eliminating all members of the other team.

[singlepic id=11392 w=320 h=240 float=left]At the end of each round, you are awarded “supply” based on your individual and team performance. Supply is used round-to-round to upgrade weapons and get access to extra equipment like C4, RPGs, flashbangs, and other explosives. The weapons available will be familiar to any fan of online shooters, including favorites like the AK-47 and M16. All primary weapons can be used by any of the game’s three classes. The Light class is limited in the amount of armor and equipment it can carry, but gains speed as a result. The Heavy class is the inverse, carrying extra equipment and strong armor at the expense of agility. The Medium class, naturally, falls somewhere in the middle. Combined with the tech-tree style weapon upgrades, this makes the gameplay experience pretty customizable.

I wish the same variety was applied to maps in Insurgency. There were only three settings to choose from initially, although a fourth has just been added. While the existing maps all offer very different experiences, I’d love to see more added. There is plenty of reason to be hopeful about this; content updates have been frequent and the team at New World Interactive seems very responsive to community feedback.

The game is very reminiscent of the more recent iterations of Counter-Strike graphically and the sound, while still a work in progress, definitely adds to the experience. Overall, Insurgency is surprisingly polished for a game still in pre-beta which suggests the final product will not disappoint. If you’re a fan of CS, enjoyed the original Insurgency mod, or are just looking for a shooter that emphasizes tactics and teamwork, Insurgency is worth a look. Insurgency will be available on Steam later this year, but impatient gamers can purchase early access (including a copy of the final product at launch) on the Insurgency website here.