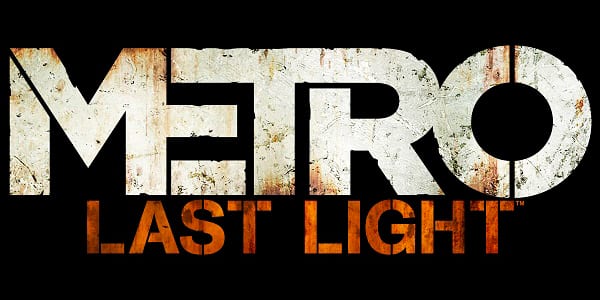 Prepare yourself – it is almost time to return to Dmitry Glukhovsky’s post-apocalyptic world of Metro.  Though it won’t follow the book Metro 2034, Glukhovsky is collaborating with the team from 4A Games once again to bring us the continued adventures of Artyom and his battle for survival in a horror-filled world.   The folks at 4A Games have two major goals with this sequel – build greater detail into the world they have created with additional realism (including new dynamic weather elements), and secondly to raise the survival horror elements to a completely new level.  This means using scavenged items more, wiping crud from your air masks, and piercing the darkness with your head lamp (complete with hand-crank charger) more often than ever.  These two goals combined aim to bring players the most authentic Eastern European look at the post-apocalyptic world.

[singlepic id=8041 w=320 h=240 float=left]Our demo opens with the player, Artyom, remembering when he used to ride the subway.  As this distant memory fades, we are snapped back to the real world.  Grabbing a gas mask, an air filter, and some clips from an obviously-lived-in area.  Heading up the moss-covered steps, we step into the light.

The city is an absolute wreck.  Nearby we see that a plane has crashed creating an opening in the debris.  Walking over the wing of the plane, the world goes from thawing snow to pour acid rain rather quickly.   Charging our headlamp we head back down underground.  Grabbing some equipment off of a corpse, we see small spider-like creatures skitter from underneath the corpse.  One harmlessly jumps up and latches onto our facemask.  Reaching up, we crush it and toss it to the ground, wiping the guts off the mask in much the same way we brushed off the rain.  The dead creature guts attract flies – just another example of their detail oriented approach.

As we head further into the station, grabbing additional ammunition off of more corpses, we follow a slick blood trail.  Lightning flashes, illuminating shadows of beasts unseen.  Lighting a nearby oil lamp, we grab a shotgun only to be knocked to the ground by some vicious creature.   Being wrestled to the ground, we manage to push the shotgun under its neck, scrambling to pull the trigger at the last moment.  Shoving the corpse off of our body, we wipe the blood off of our mask.  Back on the surface, our friend that has been trekking through the underground area with us notes that we are covered with blood just as a large pack of these creatures runs by.   The weather turns from bad to worse, and running to the body of the plane has proved much harder than we thought.  Gripping the steel door together, we yank the door to the plane body open.[singlepic id=8038 w=320 h=240 float=right]

Dead bodies are strewn throughout the plane, but that’s not the most horrifying part.  As we walk through the main area of the plane, flashes of these people alive fills our vision.  Playing tricks with our mind, we steel ourselves against the visions.  Setting fire to some spider webs with a lighter from our pack, we step into the cockpit.  Once again beset by visions, we watch as the pilot and co-pilot witness the impact of a nuclear weapon.  As the blast breaks the cockpit glass, the debris and heat cuts the pair to ribbons and then cooks them nearly to ash.  The plane rapidly crashes to the ground and we are knocked back to reality.  Disoriented we stand back up and help our friend put his mask back on – his obvious hallucination is causing him to believe he’s still breathing in the toxic fumes of a burning plane.  Saving his life, we grab our weapons and stumble through to the other side of the plane.

[singlepic id=8035 w=320 h=240 float=left]Our movement forward is halted rather quickly by a flying demon.  Picking us up for a bit and then dropping us unceremoniously onto the pavement, the creature streaks through the nearby trees just as lightning sets them ablaze.  Unfortunately the added light attracts more of these beasts.  Pulling a bolt-action rifle from our pack, we begin to make light work of the demons but soon find us out of precious ammunition.  You might recall that ammo is both used for weapons, as well as currency.  Spending money by the handful, we rip through the bulk of the beasts in a hail of bullets.  Making our way into what looks like the remainder of a subway station, we alternate between killing the creatures and wiping the gore from our mask.  As we reach the bottom of the station escalators, we engage another pack of the rat-like superbeasts we encountered when we found the shotgun.  As our fate looks all but sealed, a pair of pyros open the door and use fire to push the vile demons back, securing our safety.   As our demo closed, the crew let us know that we will get back to this European world of demons and survival in early 2013.  Look for our continued coverage as we get closer to that date.