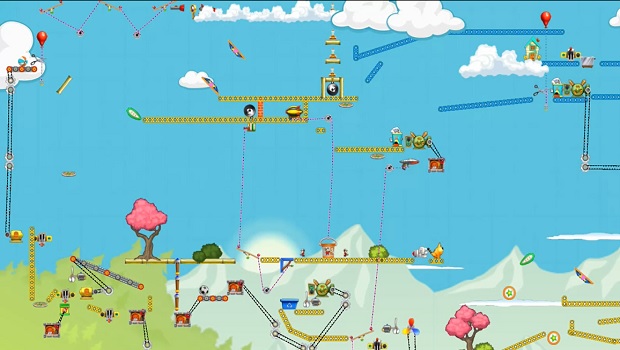 Remember the board game Mouse Trap? You’d spend 20 minutes piecing together a needlessly complex Rube Goldberg mouse trap, only to watch all of your hard work undo itself in a few short seconds. Often, the trap didn’t work as designed. Marbles would roll off of the board, or reach their destination with too little momentum to trigger the next action. But that didn’t mean it wasn’t enjoyable; the tinkering was half of the fun anyway.  Thirty years after the release of that board game, the same “build a complicated machine to carry out a simple task” mechanics arrived on PC in the form of a puzzle game called The Incredible Machine. The title proved incredibly popular, and spawned a series whose most recent iteration is Contraption Maker, a spiritual successor developed by Spotkin. The team behind the original game is back to bring us a modern toolset to tinker with, and it looks promising so far.

The Incredible Machine was released in 1993, and racked up several awards for its innovative mechanics and physics simulations. As in the original, the meat of the Contraption Maker experience is the puzzles. Armed with an arsenal of parts including balloons, pinball flippers, bowling balls, pipes, cannons, and more, players are tasked with building extravagant machines to carry out seemingly simple tasks. “Get the ball into the box” sounds simple enough, but it quickly becomes a compelling challenge when you have to determine which arrangement of conveyor belts, trampolines, and platforms you’ll need to move the ball from point A to point B.

Because success relies on interactions between objects and gravity, the physics are core to the Contraption Maker experience. Even at this early stage in development, the work that has gone in to crafting the physics engine is very apparent. Some of it is obvious; a bowling ball falls faster, hits harder, and weighs more than a basketball. But with over 100 objects in the game so far, there are also subtleties that can make you rethink your entire machine design. Your contraption can go from incredible to obsolete with only a small change to the physics calculations.

As a result, the early alpha version of Contraption Maker contains just a handful of puzzles. The game is in a state of constant refinement, and it would be a waste to craft a large selection of puzzles only to have the solutions rendered completely useless by an engine update. That doesn’t mean the Early Access isn’t worth checking out, though; an active community has already emerged, and there are over 200 user-created puzzles available for download from Steam Workshop. And if the original Incredible Machine’s dozens of puzzles are anything to go by, we can expect a similarly generous offering from the developers themselves once the engine is finalized for the retail release.

Even then, solving puzzles is only a part of the fun in Contraption Maker. There’s also the Maker Lab, a sandbox environment where you’ll have all of the game’s many parts at your disposal to craft the machine of your dreams. Steam Workshop integration means that you can create puzzles, mods, and backgrounds to share with your fellow tinkerers. Also in the spirit of sharing, Contraption Maker features built in gameplay recording and the developers are working on cooperative gameplay as well.

Even the barebones alpha version of the game makes it clear that Contraption Maker is more than just a simple reskinning of an old but popular title. It is a from-the-ground-up modernization, with enough familiar elements to instantly excite old fans of The Incredible Machine and enough modern touches to fuel the imaginations of gamers who have never touched the original. I walked away from the Contraption Maker alpha feeling intrigued, and looking forward to more.