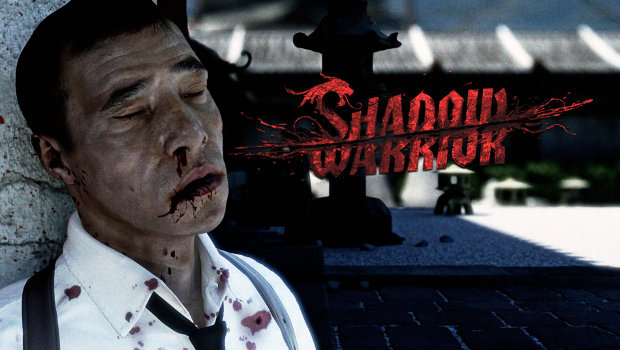 If you were playing first-person shooters on your PC back in 1997, you may remember Shadow Warrior from 3D Realms. While it deserves credit for introducing room-over-room maps, ladders, and vehicles to the FPS genre, most probably remember it for protagonist Lo Wang, utilizing his trademark katana and throwing stars. And of course, there’s the developer’s insistence on playing up Asian kung fu movie stereotypes.

When it came time to reboot the series, publisher Devolver Digital enlisted the help of developer Flying Wild Hog. With their release of Hard Reset in September of 2011, Flying Wild Hog had shown a propensity for mixing the old school with the new, and proved that the classic no-cover shooter still has a place in today’s gaming universe. And now, they turn their sights to a reboot of the classic Shadow Warrior. I was fortunate enough to ride out a portion of the game in a preview build, and we may be in for a treat when this game is completed.

[singlepic id=15153 w=320 h=240 float=left]It is important to note that this game is a full reboot – a re-imagining – and not simply an HD makeover of the original game (that already exists as Shadow Warrior Classic Redux). Yes, you once again assume the role of Lo Wang as a bodyguard for Zilla Enterprises. Yes, the game takes place in Japan. Yes, the katana and shuriken play starring roles. But beyond these aspects, this new iteration of Shadow Warrior is a brand new game through and through.

Things kick off with a pleasing introductory cinematic as Lo Wang drives swiftly down a road bordered with bamboo forests, taking a call on his cell phone from his boss, and singing loudly along with his blaring music. It is clear from the start that the game is going to carry a light-hearted mood. And while Flying Wild Hog has dispensed with much of the tasteless, racist overtones that the progenitor employed, the dialog is no less entertaining for it. Most reasonable people will likely consider it an improvement.

Tasked by his boss with retrieving an apparently important sword at all costs, Lo Wang’s journey brings you to a large complex filled with traditional Japanese architecture. The visual spectacle is impressive as you walk past trees and ponds, up the many stairs to the primary building’s front door. Once inside, Wang offers the man in charge a hefty sum of money for the sword, who proceeds to explain that it is not for sale. At that moment, Wang unsheathes his katana, faces off against a room full of men with swords of their own, and madness ensues.

[singlepic id=15155 w=320 h=240 float=right]The first taste of combat in Shadow Warrior is instantly enthralling. Making first-person melee combat functional – let alone entertaining – is a difficult task, indeed. But instead of expectedly fumbling about, I found myself rushing up to an enemy, slicing off his arm, and then dodging to the side to take another swipe at his attacking companion. Whipping the katana around, severing heads and limbs while blood sprayed all directions, listening to Lo Wang’s campy one-liners, it all culminated in such glorious chaos that I couldn’t wipe the ear-to-ear grin off of my face. I was immediately enamored.

Still, the combat goes deeper. Lo Wang is soon bestowed with demonic power, and this unlocks the game’s skill progression system. While playing, I was earning Karma points, and discovering Ki crystals. These can be spent at any time in the upgrade menu to grant new abilities, such as a chargeable thrusting katana strike, a force wave to knock enemies back, or the ability to heal. And instead of assigning these abilities to fixed keystrokes, Shadow Warrior tasks the player with pulling them off through a sequence of keys, almost like a cheat code, or a special move in a fighting game. It seemed intimidating at first, but after a few minutes, I was casting powers in the heat of battle like they were second nature.

That healing ability became important rather quickly. I felt invincible at the game’s onset, slicing through foes without worry. But later, monstrous enemies attacked with intimidating numbers, forcing an approach that made full use of all available abilities. And true to old-school form, health does not regenerate in Shadow Warrior. This being a no-cover shooter, I was rarely given the chance to hide and catch my breath in the midst of a large-scale battle. Combat was only survived through swift attacks, timely dodges, and making proper use of the various skills. It was difficult enough to keep me from coasting through, but rewarded with success when I employed a well-rounded strategy.

[singlepic id=15154 w=320 h=240 float=left]A pistol and uzi were each recovered at later points in the play-through, and they came in very handy when dealing with enemies who employed projectile attacks. And not unlike spending karma and Ki on powers, money found in the game world can be spent to upgrade firearms. Playing the game with guns felt much more like an old-school shooter, but nothing compared to the thrill and power of the up-close and personal sword fight. In Shadow Warrior, the katana is not just the standard melee weapon that you are only apt to use when running out of ammo. Utilizing it seems undoubtedly to be the way to play this game.

From the short time that I was able to spend with Shadow Warrior, it’s clear that Flying Wild Hog is putting equal effort into both style and substance. Accompanying the exciting combat, the settings are detailed and varied. The developer is also clearly having some fun with them, peppering several nods to other games like Hotline Miami, Serious Sam, and the aforementioned Hard Reset throughout the experience. There is no set release date at the time of this preview, though the game’s official website states that we will see its release on PC this Fall. This is good news, because if I can say anything about the way that I felt after finishing this portion of the game, it is that I wanted much, much more.