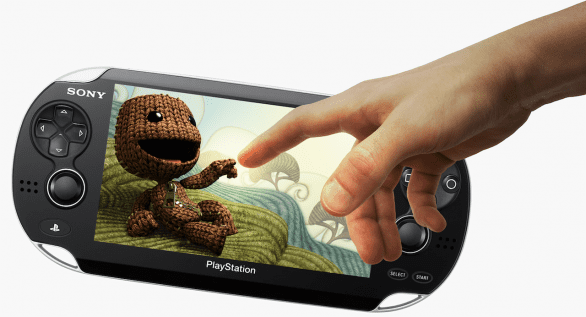 LittleBigPlanet has become the flagship franchise for Sony, with titles appearing on both the Playstation 3 and PSP. The first LittleBigPlanet launched Sony’s new “Play, Create, Share” ethos and allowed players to create their own platforming levels, while LittleBigPlanet 2 expanded on it, allowing us to not only create levels, but full-fledged games of all genres. This fall sees a double helping of Sackboy for everyone, with LittleBigPlanet Vita hitting first in September, followed by LittleBigPlanet Karting in November. Sony was kind enough to send over a little taste of what to expect on the Vita version  of their premiere mascot platformer, and I was able to check out the first world in Story mode and mess around a bit in Create mode.

Things start innocuously enough. I power on the game and I’m treated to the prerequisite Stephen Fry introduction video, a staple of the series since the first game. My Sackboy is thrown into the first level, where I am taught the controls and introduced to the game’s creators (this time it’s in the hands of Tarsier Studios and Double Eleven Studios, in collaboration with Media Molecule, the designers of the console games).  I customize my dapper little Detective Sam Sackboy, complete with trenchcoat and fedora. I continue along the level, when suddenly, things go awry, and I am whisked off to Carnivalia, a land of wonder ruined by the Puppeteer. The Puppeteer has taken interesting looking Sackpeople and turned them into blank husks, making things rather boring for everyone. So it’s up to Sackboy (or Sackgirl) to traverse Carnivalia and return joy to the land.

The first world, La Marionetta, looks like a vaudevillian circus tent, replete with clowns, accordions, and feats of derring-do. The game absolutely oozes adorable, and it will be instantly familiar to those who have played previous versions of LittleBigPlanet. The music is lively and bouncing, the graphics look exactly like the console version (though to be fair, they never really taxed the PS3’s graphical output), and Stephen Fry’s charming narration accompanies you while you faff about the game.

[singlepic id=8485 w=320 h=240 float=left]Controls will also be instantly familiar to those who have played the previous games, and those who disliked the floatiness of the controls before won’t be swayed on the Vita version. You will spend most of your time jumping and pushing objects, flipping switches and solving puzzles as before. You still have three different planes of movement, allowing you to jump into the foreground and background. Now, with the added benefit of the touch screens, you can interact with objects by poking at them. Certain objects that glow blue can be moved around on the top screen, either poked in, or slid across the level, and objects that glow green can be tapped at from the rear touch screen to push them back out. It’s very intuitive, and it’s a lot of fun to pull back on a block like a pinball plunger and watch your little Sackperson careen across the screen. The game also allows you to use the included front and rear cameras to take pictures of yourself or anything else and turn them into stickers you can use to customize your levels. The whole process is much easier than having to use the EyeToy attachment or an external digital camera as was the case in the console versions.

The level structure is similar to previous games as well. Each world has several levels that were all created by the game designers using the actual game creation software. The levels all have tons of little secrets to find off the beaten path and each item you unlock gives you something cool: a new minigame, a new piece of clothing or body part for your Sackperson, or a bit to customize your own created levels are hidden in every nook and cranny. Completing each level unlocks even more items, and finding all the secrets and finishing without dying will get you more. Many levels also feature sections that require more than one Sackperson. I wasn’t able to play online with anyone, so I wasn’t able to test those portions out, but online features play a huge part in the game, not just with online multiplayer.

Along with the levels created by the developers, the whole point of LittleBigPlanet is to play levels created by other users, share those levels with your friends, and even create your own levels. Finding levels to play is incredibly easy. You can choose from different categories, like “Cool Levels” or “Team Picks,” or just search until you find a good one. Much like LittleBigPlanet 2, you’re not just limited to creating platforming games now. Minigames, shooters, strategy games, all sorts of games can be made using the in game creation tools. In fact, LittleBigPlanet Vita includes tools from the first two games, some from the PSP version, the DLC packs, as well as the new tools included in the Vita version, making this version, by far, the most versatile and inclusive game creation tool set this side of actually coding your own software.

[singlepic id=8488 w=320 h=240 float=right]I created my own level in about ten minutes or so, with music, rain effects, some obstacles, a set of stairs, and a scoreboard at the end. It’s very satisfying to be able to instantly play your creation to test out jumps or puzzles, and though I’m not very good at the whole design thing, the controls are very easy to use and all of the tools are laid out logically. You can use both the button controls as well as touch controls, so you can decide whether pinching and squeezing or rotating analog sticks is easier for you to manipulate objects in your levels. There is definitely a learning curve in actual game creation, as there are over 60 tutorials here, ranging from basic level design, to creating objects, to game controls, to even artificial intelligence. You will get as much as you give to the game, however, and if the previous games are any indication, some very bright people will get their hands on this and design some jaw-dropping levels and games.

From what I played of the demo, LittleBigPlanet on the Playstation Vita is shaping up to be a great entry into the series. It does play similarly to the previous games, but when you have a formula that works as well as this, it’s best not to change things too much. It features the same high quality level design and feels just as whimsical as its predecessors, but now you can while away the hours on your daily train commute, waiting at the DMV, or anywhere else, tinkering away on your very own levels or games. As someone who can’t commit a large amount of time to playing console games at home, something like this is a godsend for scratching that creative itch. The only limit is your imagination (and your battery life). Check out the screenshots below, and look for LittleBigPlanet Vita on September 19th in Europe, and September 25th in the US.