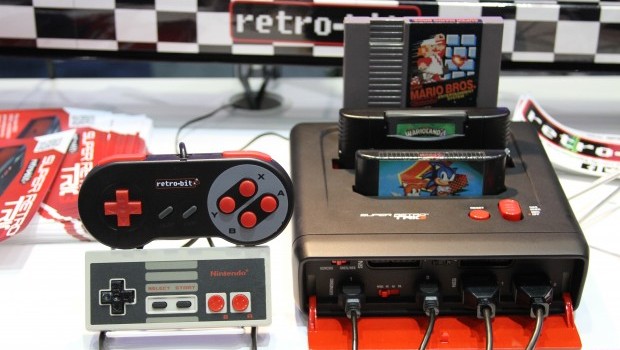 If you’re like me, you grew up playing the classics — Super Mario Bros., Sonic the Hedgehog, Castlevania, and hundreds of other classic titles have weened countless gamers on the joys of avoiding spike pits and achieving virtual victory. And while there are millions of carts out there that work perfectly fine, trying to find an NES in working order is getting harder and harder with every passing day. As the old consoles wear down with age, new generations are discovering these classic gems — that’s where Innex and Retro-bit step in, and we got a chance to check out their wares at E3.

As the patents on classic systems like the NES, Sega Genesis, and Super Nintendo expire, other companies have taken it upon themselves to create their own hardware that’s as close to playing the real thing as actually blowing on your carts and slapping them into that giant gray pizza box. Innex is currently set to start distributing the Super Retro Trio this summer.

An update to the Retro Duo, the Super Retro Trio has slots that accept NES, SNES, and Genesis carts — just plug them into the top like you would on the actual console, plug in either the original controller or the new universal controllers that come stock in every bundle, switch it to the right input, and you’re set to blast down memory lane. You can even choose the region encoding, allowing for import gaming from every possible country that released classic NES, Genesis, or SNES games.

We got to play the original Super Mario Bros. with both the original NES controller as well as the controller bundled with the system, and other than some screen stretching on a widescreen TV, everything felt as faithful as it could have been if you’d been playing it on the original system. Plus, don’t throw away those packed-in controllers (as we’ve done on other retro clone consoles) — they’re actually built pretty well. They feel a bit lighter and more plasticky than an actual SNES controller, but the response time feels just as good as the real thing — much more than I was expecting from a knock-off all-in-one controller.

The Super Retro Trio comes with the system, two universal controllers, AC power adapter, and A/V cables, and will retail for $69.99 this summer. But wait! There’s more!

Speaking of things that break down a lot, N64 controllers are notorious for their incredibly fragile analog stick. Retro-bit’s got a solution: the new Wireless Hypermode N64 controllers. A dongle plugs into the console, sending out the signal to the wireless controller (as well as doubling as a Memory Pak port — the slot on the controller is taken up by its batteries). Like the stock Retro Trio controllers, these also feel a bit light and plasticky, but the buttons feel fine, and the latency (as proved by our time hammering away at each other in Super Smash Bros.) seems negligible, even when standing around ten feet away from the TV. Also, every single button has Turbo and Rapid Fire options, and the controllers come in a variety of colors. And while we saw the N64 controllers at E3, wireless SNES/NES controllers and Genesis controllers will be available as well — all will be available this summer for $29.99 each.

Despite seeing games for the next generation this E3, the retro scene is alive and thriving, thanks in part to companies like Innex and Retro-bit. If what we saw of their products is any indication, fans of classic games will be well served in 2013 and beyond.