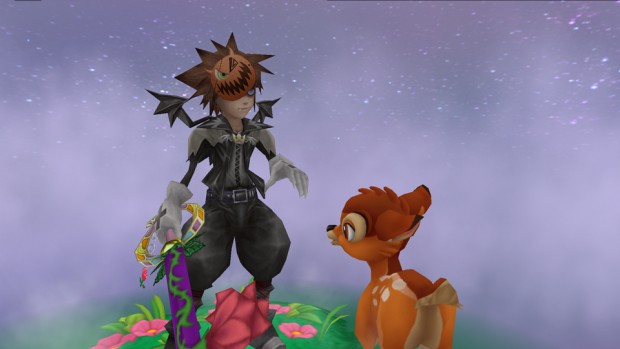 While everyone’s still picking their jaws up off the floor at the announcement of Kingdom Hearts III, Square Enix has been busy finishing up the North American release of Kingdom Hearts HD 1.5 ReMIX (wow, that’s a mouthful). The HD re-release includes the first Kingdom Hearts game, Kingdom Hearts Re:Chain of Memories (the PS2 update of the GBA bridge between Kingdom Hearts 1 and 2), as well nearly three hours of HD remastered cutscenes from DS game Kingdom Hearts 358/2 Days. We got a chance to check out a bit of the collection, and it’s just as we remembered it.

We got to mess around for a bit in the Nightmare Before Christmas level in Kingdom Hearts, and the HD remaster is looking great. Kingdom Hearts had a style all its own, and the upgrade in resolution really helps bring out how cartoony the game really looks. The game looks, plays, and sounds just as it did back in 2002 — but with updated graphics and a few new tricks up its sleeve.

For the first time ever, North American audiences will be able to play the “Final Mix” of Kingdom Hearts, giving fans new cutscenes, new boss fights, and new Keyblades to find. They’ve also enhanced the controls, creating parity with Kingdom Hearts II and Re:Chain of Memories. Camera is now controlled with the analog stick, rather than the shoulder buttons, and reaction commands have been retrofitted into Kingdom Heart’s combat. Fans will also be able to get trophies out of all three experiences on one disc.

Kingdom Hearts III has been a long time coming, but this should tide over old fans, and create some new ones while we wait for a proper sequel. And for $39.99, Kingdom Hearts HD 1.5 ReMIX offers some solid value. Look for it this fall on PlayStation 3.