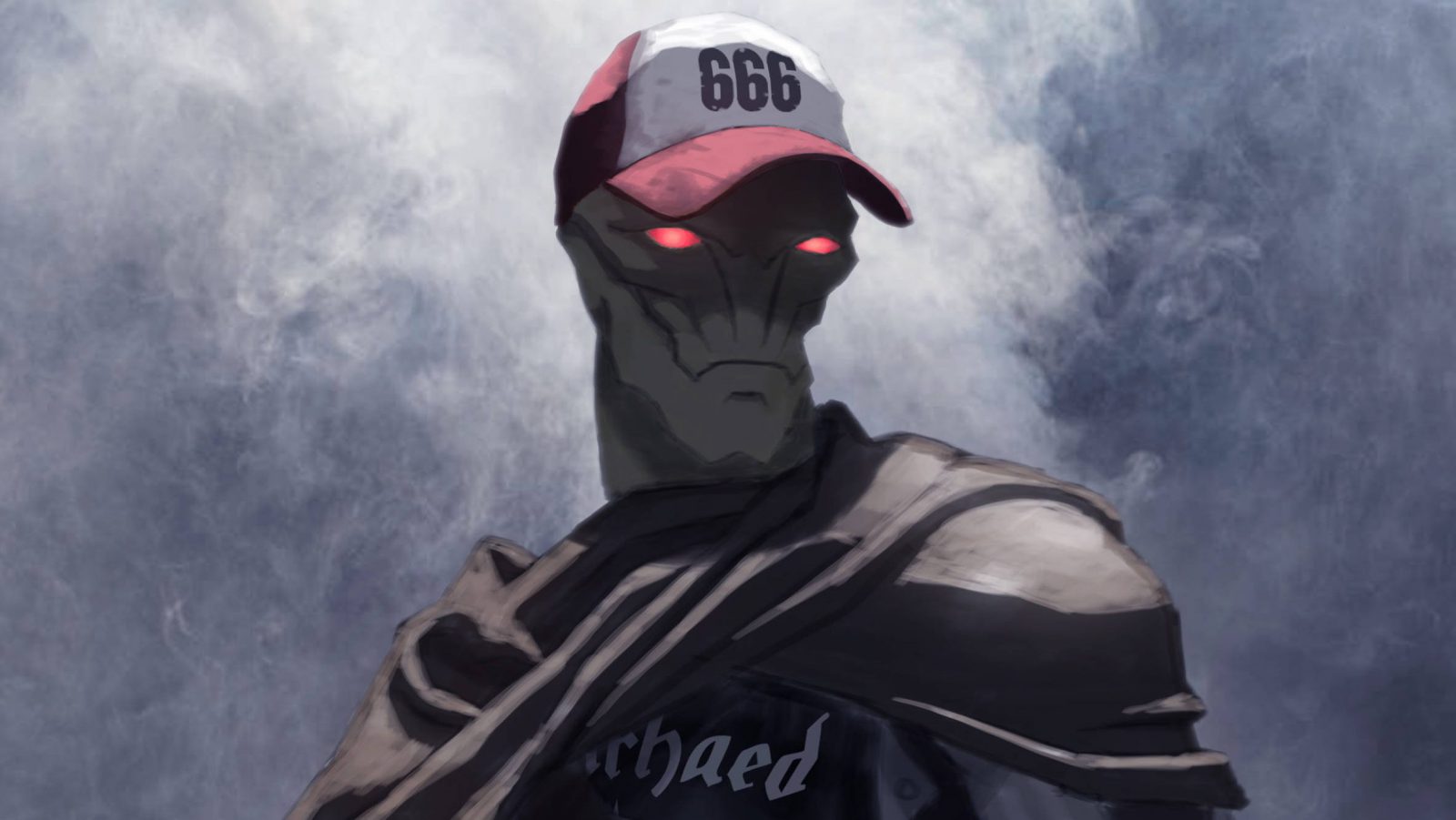 Have you ever seen or done something that feels familiar, but you simply can’t peg it? Don’t worry, a case of déjà vu can sometimes be reminiscent of good times, like Novarama’s four-player, action-role playing game, Killsquad.  With its fast-paced action, spot on game mechanics, and ability to upgrade your character on the fly in a plethora of ways, this game has a lot of potential.  Upon jumping into the game and arriving at the character select screen, my initial thoughts were, “Is this Killsquad or did I launch Destiny?” Though this game has its own personality and unique mechanics, its current character selection made me wonder how unique this game would be in a sea of well-known A-RPG’s.

With four playable characters, all looking like characters from other series of fiction: Cayde-6 in Destiny, Jason Voorhees from Jason X, and the Martian Manhunter, I instantly questioned if this game brought enough originality to the party to stand out amongst the big boys; but the game would later answer that question for me.Don’t get me wrong, this game is fun, a lot of fun, and I assume even more so with friends, but it is fundamentally different than your typical A-RPG, and it takes some getting used to. Though it’s still in its early access infancy, the game offers beautiful visuals, stunning animations, exciting weapon game mechanics, and hordes of enemies to crush beneath your supers and weapons.  Before I rant, let’s begin with the geeky stuff: performance.

Downloading from Steam, the file size is roughly 4.3gb, so there’s no need to worry about space for this little guy.  Utilizing the Unreal Engine, performance for the most part is stable, except for a few hiccups here and there. Animations from supers, explosions, and big boss matches never chugged this game down. Using MSI Afterburner, I was able to see that most of the performance is handled on the GPU’s end, so having an older CPU won’t tank your performance.  Framerate is also uncapped, so you’ll get to enjoy all the performance of your rig. 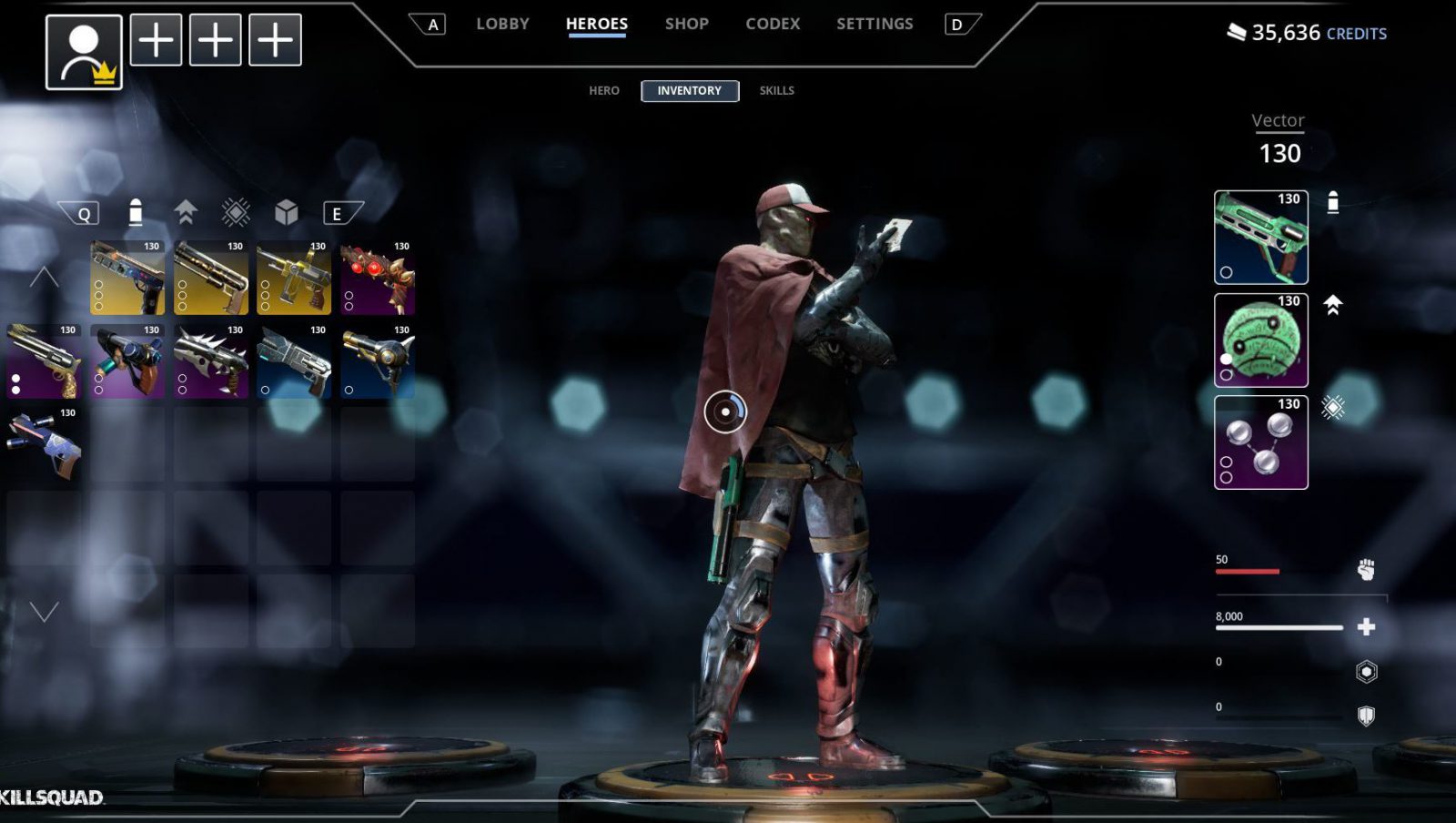 Troy is a weapon of mass destruction

I often experienced performance issues when transitioning to different areas of a level and when a lot of enemies would suddenly appear on-screen at one time. There’s definitely a need for Novarama to further optimize this game as I could see this being a hindrance when two or more players are killing hordes of enemies.  There’s also a few bugs running rampant throughout the game, from the title screen to gameplay. From the start, I experienced bugs that would revert my saved graphical setting back to normal, lose my game saves, and cause audio clipping during battles.

The game uniquely positions itself apart from other A-RPG’s by how missions (contracts) occur and the ease of upgradability during gameplay. Leveling up your character is much different than your typical A-RPG.  Each character has their own unique weapons, abilities, supers, and catering abilities. There’s Cass, the sword wielding-warrior Nun, who does a good amount of damage but has low defense.  Kosmo, the Jason look-alike, whose defense and power are unmatched, but is slow. Troy, who’s good at spacing the enemies out on the battlefield and dishing out death shots. And, finally, Zero, the loser robot that can heal himself and others while providing long-range offense.  The background of the characters is extremely vague. A short bio of each character is all we receive, and none of them appear to have any connection to one other, which touches on my next point.  There’s absolutely no story to the game. You simply choose a character, a contract, wait for someone to join you in the lobby or roll solo, and kill.

When choosing your character (currently there are only four), you must be aware of their Vector level, as this tells you if you stand a chance when choosing a contract.  Choosing an easy contract with a low Vector will net you little credits and choosing a contract with a high Vector will earn you more credits, but you may find yourself dying over and over if you are rolling solo.  Unfortunately, I have yet to have the opportunity to play with anyone as not many appear to be online in the early access stage of the game.  Upgrading your weapons, items in your inventory, and completing contracts is how you increase your Vector, and, yes, it will feel a bit grindy, but when you upgrade your weapons, you’ll feel like a badass. 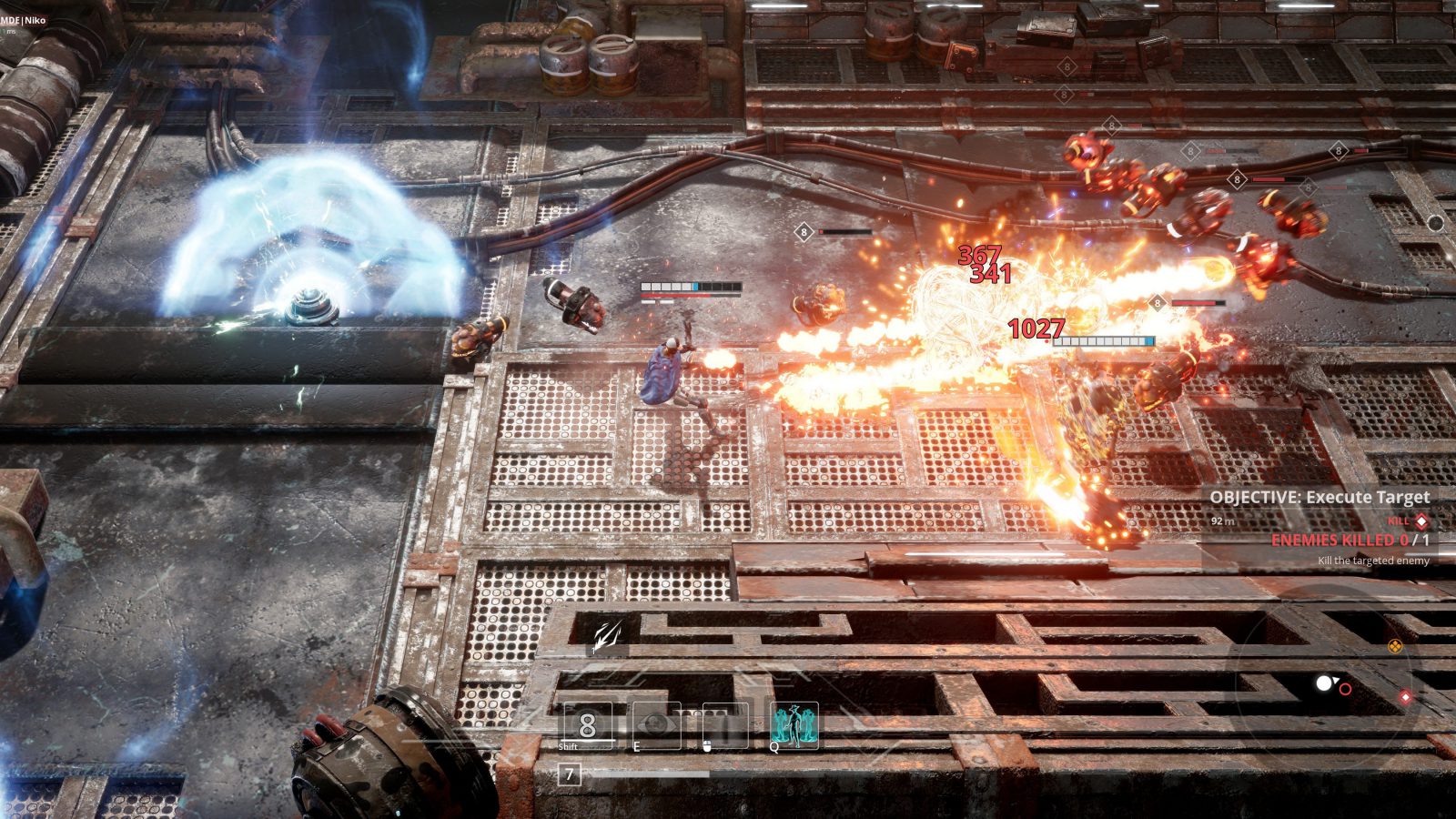 While navigating the menu, you get the feeling that the game prefers you to use a keyboard and mouse rather than a controller.  When using a controller, many of the options require the player to use the left thumbstick to glide across the screen, which takes forever. Upon choosing your character and which contract you’d like to do a lot of killing in, you’re entered into the lobby, where you can roll solo or join up with three other companions.  Once you’ve been matched with other players or choose to go solo, you’re dropped into a world that is beautifully detailed.  With ambient occlusion and screen space reflections handling the lighting effects, TXAA anti-aliasing smoothing edges, and a high native resolution — visually, it’s a beauty.  The in-game audio is also well mixed.  With a decent set of speakers, you can hear enemies coming from off-screen, your super abilities have a certain CRUSSHHING effect to them as they charge up to rain down onto your foes, and even your hero’s footsteps echo when entering tight spaces.

Unfortunately, the level design doesn’t offer much to the imagination.  A few are multi-tiered and offer a sense of non-linear movement, but there’s only one way to progress. I also experienced something that I hadn’t since side-scrolling games on the SNES.  When firing a projectile, it would miss the enemy as if we were on a different plane. This is usually the case when a game is developed in a 2-D environment made to give the impression that it’s 3-D.

Each contract has an objective to complete. Some are interesting, like defeating three bosses that work together to trap you, and some are ridiculously misplaced, like escorting a hovering truck that has its own defenses and fails to use them, while running beside it.  But A-RPG’s are about exploring and looting, and there’s little of that in the early release. I began my first play-through using an Xbox One controller, selecting Cass, the sword swinging Nun as my character. As I began cutting through enemies like a hot knife through butter, my immediate reaction when I crushed the first wave of enemies was, “where the hell is the vibrating feedback in my controller.” After entering the settings menu, I was gutted to find out that there is no option for it. Something so basic shouldn’t be an oversight. But here’s where things got interesting — hitting enemies feels satisfying and confident. There’s a certain crack when you slice through a dragon with your sword. Kudos for that. The enemies come in waves and dispersing of them feels good. You’ll often come across mini-bosses and bosses that test your skills and timing with basic and special attacks. Use them wisely and you’ll fight another day, choose unwisely and, well, things will drag out a tad bit longer. 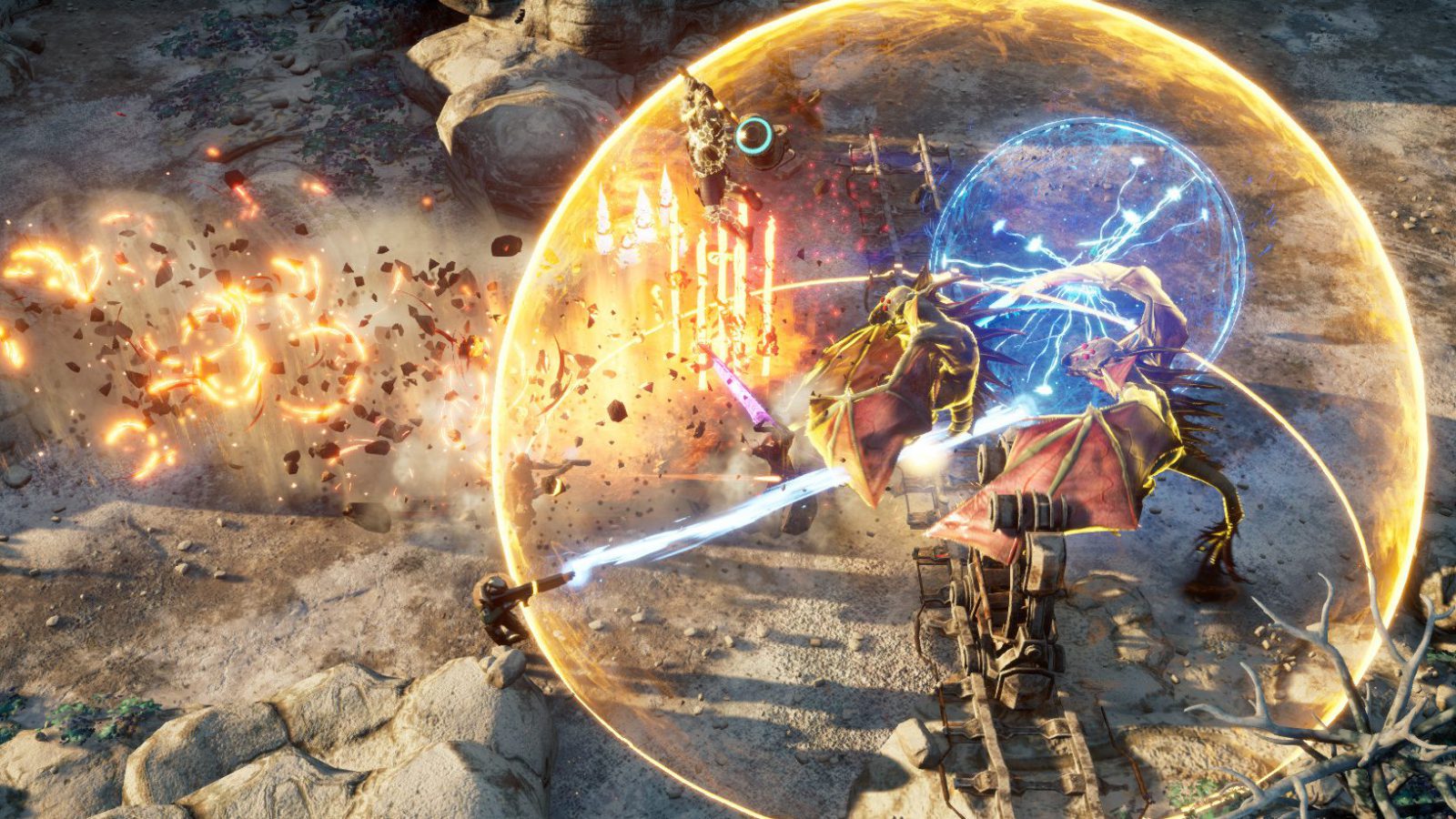 Not even a shield can save them

Using the right thumb stick allows you to use the basic attack as an option, rather than pressing the A button.  This allows for your basic attack to be used while moving and letting you cover more ground. When confronted with a mass of enemies, this is where the game shines.  With four or more attacks available to use at a time, you feel invincible.  Each attack has a special way of either knocking the enemy back or insta-killing. Though there is no combo system, you can string together your skill attacks and supers to pull off a deadly barrage of attacks. Where this mechanic shines, there’s one that fails.  With no vibration feedback or obvious indications showing when you are taking damage, I found myself with low health when I assumed I dodged an incoming attack

The enemies are well choreographed, and with the right combination of attacks, you can disperse a sizable number of enemies at once. Each attack has a cool-down, unlike the basic attack.  Though each hero has their own unique attack style, there’s a sense that the balance needs a bit of tweaking.  Your super can take two minutes to recharge.  As you disperse your foes, you earn DNA currency which is used at Biosystem machines in the world.  The Biosystem machines allow you to buy health, special supers, and attributes during a contract mission.  This, and leveling up through kills are Novarama’s way of introducing their in-game leveling up system.  Each new contract you begin resets your character’s stats.  You keep your Vector skills but lose your in-game upgrades from the previous contract. Completing contracts also nets you credits.  These credits are used to buy weapons and mods for weapons, which come in handy as you take on more difficult contracts. At its core, this game is a fun party game that lets you rack up kills in a spectacular, offensive fashion.