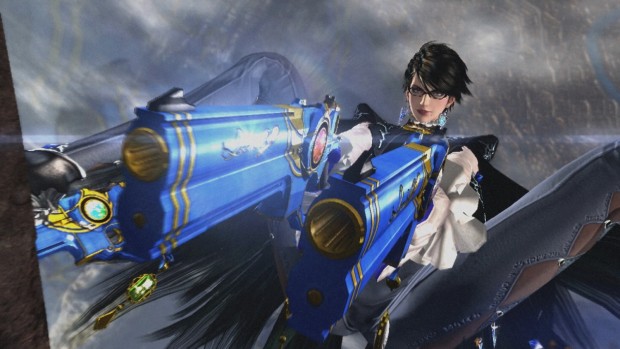 Let’s be frank – Nintendo’s stable of M rated games is abysmal. While people can drum up lists of their top-ten M-rated games on the Wii console, the fact of the matter is that the much-purchased Mature games found on competing consoles are not their wheelhouse and are often found elsewhere. This alone reinforces the stigma that Nintendo is just for kids (which it’s not).

I’m not throwing the baby out with the bathwater here — Nintendo has done very well for itself despite this perception. If you look over the catalog of top selling games by platform you’ll find that Nintendo’s strength lies in its younger audience, and they need to keep their strength without compromising to cover their weakness.

Enter Bayonetta 2 — a revival Platinum Games IP — one whose original release including the same over-the-top action and crazy combat that  impressed us. Nintendo approached Sega, not the other way around, and said they wanted more and they wanted it exclusive. The crazy witch-hair, the gun-boots, all of it. Make another Bayonetta game, and don’t soften the edges. Bold, beautiful, and half-crazy are all included, even sporting a new haircut. I got the chance to play the game at E3, and let me tell you, it’s a true sequel.

Scenes such as Bayonetta and Jeanne inverted, riding on the back of twin fighter jets flying through a downtown metropolis while banishing demons with magical hair and big guns is what they offer. It’s a true sequel, with no green tubes to hop down, and Bayonetta’s outfit is as skimpy and revealing as ever. The advanced controls are similar, however Sega and Nintendo wanted to bring those less trained in these games to be able to enjoy it, so there is a simple control method which takes advantage of the Wii U’s touch controls.

A Nintendo rep, a young woman who was clearly not a gamer (though by no means a vapid booth-babe) was demonstrating the game in the simple control mode. I was handed the controller, and switched over to the advanced controls and raced through the first level. The usual Bayonetta fare was there – skills upgrades, combo moves, and a charge meter called Umbra Climax that allows you to unleash big moves such as creating meat-grinders behind your foe and kicking them into it. Dodge and block were still prevalent, and combo timing was both forgiving but not too easy.

During the train scene I handed the advanced controls over to the rep, and asked her to continue. Well, I can tell you she certainly put in a good effort, but it really cast a light on how the Wii U simplified controls bring Bayonetta 2 into the hands of the inexperienced. As a gamer I found that looking at the Wii U screen less desirable, and the controls were far too simple for me to enjoy.

This is not a bad thing. In fact, I think that this is key to the success of both this title, but more importantly bridging the gap between the less experienced gamers with full gaming experiences. For my own personal tastes in games, I’m looking for new and different experiences — and it’s easy to be jaded and say “Yep, another Bayonetta. Moving on,” but in reality, this is the exact thing that Nintendo needs to do — not just with one game, but with a lot of them. They need to “Wii U” these games. They need to provide a full and complete control set, and also a simple one where anyone can pick up and play. This is the power of touch screens — it bridges the gap between the mapping of buttons to actions, to simply pressing an “attack” key.

If Nintendo can gain traction in the market with their younger games and at the same time build publisher confidence that M-rated games have a place in the Nintendo stable, it will go a long way in bringing a well-rounded, if somewhat technologically outclassed, platform back to the forefront of console gaming. Bayonetta 2 is a step in that direction, but she’s going to need help, and they need to find ways to bring both new and existing IPs to the WiiU. It isn’t the going to sell me on the console itself, but Bayonetta 2 is one more reason for me to own a WiiU.