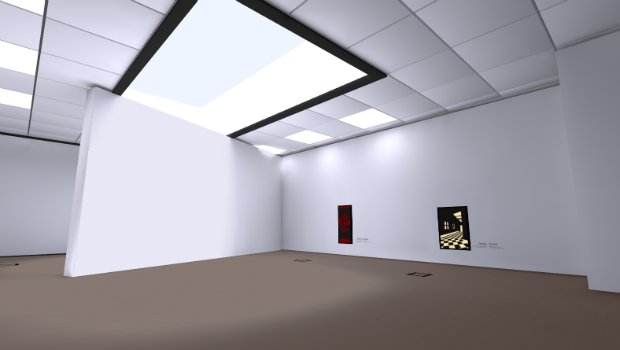 Imagine if after a shifty poker game at an x-ray factory, you lie down to sleep and wake up with an enormous eye problem.  The dressers, tables, chairs, piles of clothes, and two-liter bottles that make up your bedroom are now simply geometric shapes on a 2D backdrop.  Can you make it to the other side to safety?  That’s the challenge presented in Beyond Perception, an upcoming game from Emedion Games.  An experimental puzzle game, Beyond Perception challenges players to escape museum paintings that lack detail, definition, or lighting using observational skills and the brain’s spatial “fill in the blank” powers.  Currently in its gestational stages, Beyond Perception is due to release sometime in 2014.

As the lone patron in a strangely geometric museum, players browse through various paintings of geometric shapes.  Each one features different colors and have corresponding names that hint at the solution..  In front of each painting is a viewing square, which when stood on while facing the painting sends the player into the painting itself.  Once inside, you’re faced with a simple 2D interpretation of a 3D world.  There will be squares, or solid lines, or large expanses of a color, some of which are solid surfaces.  The player can move and jump, but nothing else.  Using the clue provided in the painting’s name, it’s your job to get from the starting point in the painting, back out through the front into the museum.  At some spot within the painting, you can see an opening that leads back out, but the path is obscured by the complete lack of definition of space or detail, a mental code that you have to break using the brain.

As for how fun this is, that’s left to the player themselves.  There’s not a lot of variance from puzzle to puzzle, aside from the look.  Some of the puzzles are mindblowingly hard to complete, while others are dull and simple.  The only middle ground between the two is tedium in the last remaining puzzles.  That said, at this early, early stage it’s likely the best puzzles are being saved for the retail version.  While the puzzles may improve, the graphics likely will not, and they are a terrible sight.  Walking through the museum is a jaunt darkly reminiscent of a tour through the corridors of a Windows 95 screensaver.  The design of the puzzles from a challenge standpoint is a success.  However, the two-tone, solid color room design is really hard on the eyes, especially in the red colored puzzles.  The real star of the game is the music.  While the museum is silent, once a painting is entered, players are greeted with various electronica soundscapes that really add to the urgency and confusion of the puzzle rooms.  Each song sounds fun and could stand alone as a nice club track, if only paired with some popular Katy Perry hook.

While in this early stages the game is lacking in fun and excitement, the idea behind Beyond Perception is still madly intriguing.  The rooms do a great job of sensory deprivation, and the real challenge is allowing your brain to accept difficulty in something that looks so simplistic.  More intriguing is how this idea of spatial observation could possibly be expanded on both in the upcoming release of this game and in implementation in other future games.  As for Beyond Perception, it certainly needs some work to be a more complete and enjoyable product.  With that work put into new puzzles, some updated graphics, and maybe just a little explanation for players, Emedion Games could end up with a real diamond in the rough.  Beyond Perception will be available on the Windows, Mac, and Linux operating systems.  Keep your eyes open for Beyond Perception come 2014.