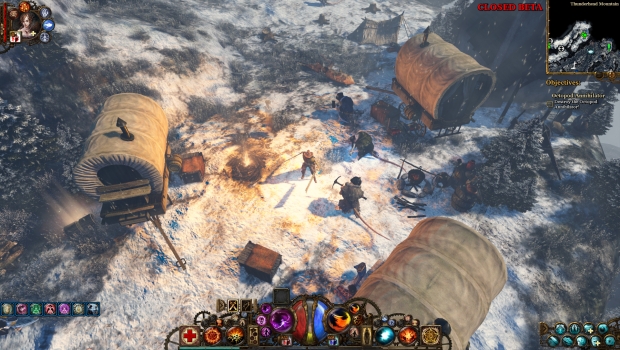 When I see a game come out exactly a year after the release of its predecessor, it makes me very, very nervous. Most products released in that short a timeframe typically give very little in the way of innovation or content, happily packing a few maps and pallet swaps into something that can loosely be called a sequel. The Incredible Adventures of Van Helsing II from Neocore Games is not one of them.

The Incredible Adventures of Van Helsing II, the second installment in a planned trilogy, once again joins the son of Abraham Van Helsing (from the Bram Stoker tales) and Katarina, his incorporeal companion in their steampunk-inspired crusade against the gothic-noir monsters of Borgova. I recently got to spend a day with the Neocore team to get a deeper look at their upcoming title. With the recent delay, it wasn’t quite ready for a final review, but I couldn’t resist the chance to tell you why I’m very excited for a sequel.

New players can start their adventure by importing their own character from the previous game, or they can start a new character. If you pick the veteran option that character will start at Level 31. Unlike the previous game which offered classes as DLC, Van Helsing II offers seven archetypes – Blade, Gunslinger, Spellkeeper, Adeptus, Bombadier, or Contraptionist, though you can break the mold and customize any of them as you see fit. Selecting one of the five difficulty levels and the tempting checkbox to make that character Hardcore (with permadeath implications) out of the way, it is time to resume your adventure.

After a quick recap for those who might have missed the opportunity to play the first game, or just need a quick refresher, Van Helsing and his ghostly companion Katarina once again dive into the fray to unite immortals and mortals alike to try to defeat the evil exile General Harker who seeks to control the city of Borgova. When a spectral being curiously named Prisoner Seven appears to offer his help in your struggle, armed with information about your enemy. Can this mysterious being be trusted? To avoid spoiling the plot, let’s instead dig into some of the new features this sequel is bringing our way.

The previous Van Helsing title gave players 40 skills to define their character. Van Helsing II provides far more, with the skill tree topping out over 200 in number. There are four tabbed sections that make up your skill loadout. In the case of a melee-based character you’ll find your points mostly spent in “Mystic Warrior”, with 27 main skill items nested under four linked tree paths. Within those skills are Powerup skills that further enhance that main skill. For instance, your main attack “Strike” can be augmented with Lifesteal (leeches life from foes), Furious Strikes (adds extra rage), Heavy Strike (additional melee damage), Stunning Strike (a one second stun), or Precise Strike (ignores a percentage of enemy physical resistance and does additional melee damage).

The next tab handles all of your ranged skills. This can be spells, firearms, fire, lightning, and much more as your levels climb. Tricks give Van Helsing special abilities like illusionary duplicates, slowing time, becoming ethereal, and others. There is even an enticing “?” skill that can only be unlocked by uncovering and solving a specific quest. The final tab is Auras. These are more passive skills, granting bonuses to your skills, healing, cooldown, and other skills.

Throwing your points across these four tabs without regard for the future isn’t very wise. Spending points in a selected group of skills gives you mastery. For instance, if you spend a solid chunk of your points on melee and hit 40% mastery, your character receives a 40% bonus to all skill effects in that group. This creates near-infinite levels of replayability as no two characters will be exactly alike. You only get three points to spend with each new level, so choose wisely.

It’s not just a bevy of new skills for this sequel. The team at Neocore has also spent a great deal of time building up their art pallet. As I tackled the various side missions I noted a great deal of upgrades. From dynamic weather instead of static, trees that sway with the wind, and most strikingly apparent, a greater degree of verticality in level design. During one section I found myself taking elevators up and down within the level to destroy a sub-objective in defense of the city, but I was always presented with fantastic depth of field down into the environment – no fog hiding things in the distance here.

In the blink of an eye our time with the game was over and it was time to throw in the towel for now. Playing through the first chapter of the game was an encouraging exposition on just what Neocore has up their sleeve. The game is shaping up to exceed its predecessor in every way, and somehow this laundry list of incredible upgrades comes with the same price as the previous – just $14.99 (though there are other options, including a full boxed copy and the possibility of having your name in the credits – check those out at the official Neocore site)

Stay tuned for our full review of The Incredible Adventures of Van Helsing II in advance of the May 22nd, 2014 release date on PC and Mac via Steam.

Ron Burke is the Editor in Chief for Gaming Trend. Currently living in Fort Worth, Texas, Ron is an old-school gamer who enjoys CRPGs, action/adventure, platformers, music games, and has recently gotten into tabletop gaming. Ron is also a fourth degree black belt, with a Master's rank in Matsumura Seito Shōrin-ryū, Moo Duk Kwan Tang Soo Do, Universal Tang Soo Do Alliance, and International Tang Soo Do Federation. He also holds ranks in several other styles in his search to be a well-rounded fighter. Ron has been married to Gaming Trend Editor, Laura Burke, for 21 years. They have three dogs - Pazuzu (Irish Terrier), Atë, and Calliope (both Australian Kelpie/Pit Bull mixes).
Related Articles: The Incredible Adventures of Van Helsing II
Share
Tweet
Share
Submit