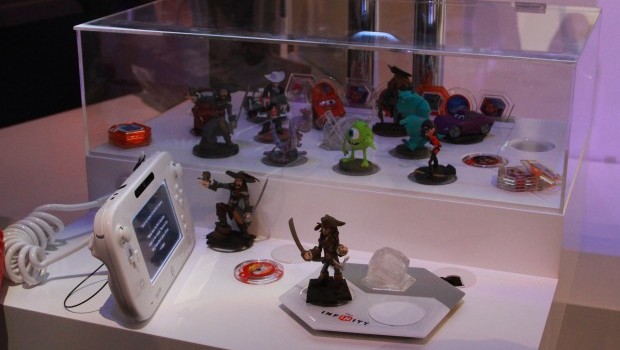 Yikes. You’re all familiar with Disney, right? You know, the company that has made family movies for the last ninety years? They own several channels, tons of non-movie Intellectual Property, and now have LucasFilm content in their stable. I got a hands-on preview of the upcoming money printer Disney Infinity, and I’ve got to tell you, I’ve shaken hands with one of the men who is responsible for my pending bankruptcy. See, they’ve got a game which is fairly compelling, but they also have the merchandising side attached – and Infinity’s Toy Box is where it all comes together.

First, let me introduce you to the Infinity game modes. In the Playset (of which you can read more about here), you can have up to two players on a single console (or four online). This character you use is based on a toy sitting on the Infinity pad, much like the Skylanders’ series – and each character must belong to the location you’re in – so don’t expect to be running around Radiator Springs as Mike Wazowski. As you complete missions in the playset, you unlock objects and items to use in the Toy Box mode. And these toys aren’t ugly either – in fact, they’re stylized to fit the game, and much love has gone into crafting both the toys and their digital assets.

Toy Box mode is, ultimately, the heart of the game itself. Rather than following quests built by Disney, you instead get to play an open world where you’re free to create whatever you’d like.  A race-track in Wreck It Ralph’s Sugar Rush on the back of Apu as an elephant? Check. Battles at the bottom of Nemo’s reef with Tron Recognizers? Yep. The creation of custom environments can be as simple or as complex as you’d like – there are thousands of objects, from cliff walls to exploding cherries to Pylon-shaped drive-in motel rooms.

Editing can be done both through a straight editor interface, or, if you find that there are some touch-ups you’d like to make, simply change your equipped item to a wand and you can edit to your hearts desire. Decide that Sugar Rush is just too pink? Throw another environment disk on the pad, and watch the backdrop and ground change to your new setting. There is also a fairly robust AI edit mode, where you can create conditions that interact with specific objects – a good example is setting up a pad that needs to be crossed three times on the race track to fire off the confetti cannon at the finish line.

Furthermore, these custom maps can be saved, shared, and even uploaded to Disney for approval (since this is a kids game, censorship is to be expected). You can also pull down other peoples approved toy box settings – and this really lies in the heart of Toy Box’s pending success. With the possibility of  user-generated content, we can expect to see this game live a lot longer than a static game scenario. To top that off, Disney can simply sell new Playsets which unlock new characters and new adventures – even for existing licenses.

But the bullet that hits the wallet is this (if you’re a collector or a parent, you’re not going to like this): they sell the modifiers for the pads in blind packs of five for three dollars. That’s right – common, rare, ultra-rare – you’re going to be handing money over to Disney at your local shops over, and over, and over again. If you don’t want this to hit your household, it might be time to consider going “off the grid”. Good luck: you have until August 18th in North America, or the 2oth in Europe.