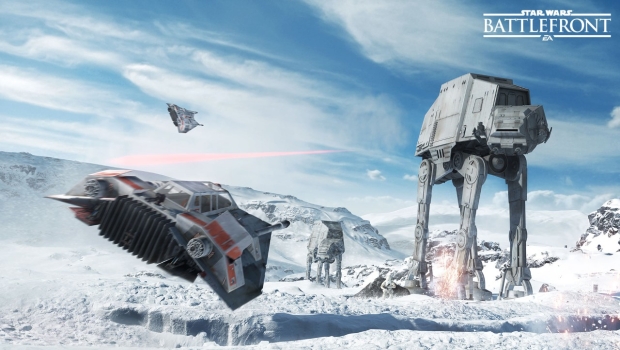 Hoth is to Star Wars: Battlefront as Omaha Beach once was to World War 2 shooters. It is the signature battle, known to everyone and often a perfect set piece to show off their dynamic engines and mechanics. I had a chance to demo the new Star Wars: Battlefront’s take on the icy planet, and while I’m still a little wary, many of my concerns have been addressed.

The new Battlefront has certainly taken inspiration from DICE’s previous work. Blasters and thermal detonators have not been fundamentally changed, and still operate similar to how they would in other Battlefront titles. The sounds and visuals they produce, however, have been amped up significantly.

The masters of sound and weapon design at DICE have put their signature on this game, as Battlefront puts you in the middle of an all-out warzone. I was on the Rebels side, attempting to fend off Imperial Forces marching on Hoth’s generators, led by two massive AT-AT’s.

As they slowly approached, I could hear the booms of their footsteps, and emerging from the Rebel base into the cold Hoth air, lasers whipped over my head and explosions boomed all around as the Empire advanced on our position. Battlefront nails presentation in spades, capturing the feel of all-out war in the Star Wars universe perfectly.

Each blaster has its own unique properties; the rifles have standard output and power, the heavy blaster can dole out punishment at the cost of speed, and blasters give you that extra mobility in exchange for a weaker blast. All of them use a heating system, where you can either carefully time bursts to not overheat, or fire until the blaster overheats in your hands and you have to manually cool it.

There’s also a fair variety of extra weapons at hand, though classes have a noticeable absence. While it’s uncertain whether they’ll be in the final game, Battlefront appears to be more loadout-based than class-based. You spawn as a regular soldier, and acquire special weapons on the battlefield.

Most of the unique weapons come from tokens, the new system for pickups introduced in Battlefront. Certain tokens give you a utility, like a rocket launcher or a bubble shield that blocks incoming – and outgoing – blaster fire. Others let you “call in” an X-Wing or snowspeeder, respawning you as that aircraft entering the battlefield.

While I missed the big hangar bays of the old Battlefront, implementing this means that a lot of the spawn-waiting for vehicles has disappeared in favor of seeking out tokens on the battlefield. While some players are still likely to solely focus on those, they’re at least more likely to be of some tangential benefit to the team in their search now than they ever were before. It’s a great change, and the air combat feels fantastic and every bit as good as original Battlefront.

In the demo I played, 11 other Rebels and myself, alongside our CPU companions, held the Empire to the last line of defense. One AT-AT was down, and we had to destroy the other before it came into firing range. Time was ticking down – I could see the timer at the top of my screen indicating we had barely a minute to spare. We held the satellite uplinks and called in a Y-Wing strike, just in time to open up the AT-AT to conventional attacks from our blasters, and we downed it with literally a single second to spare. It was exhilarating, thrilling, and perfectly captured the desperate defense of a ragtag bunch of Rebels against the onslaught of the Empire.

This may not be a 1:1 recreation of the original Battlefront series, but it captures the essence of Star Wars and puts you right in the thick of it. Some classic features have yet to be seen, and I still haven’t had a chance to see heroes or some of the other signature Star Wars battles, but from what I played I was fairly impressed. We’ll be watching this one closely as it nears its November release.