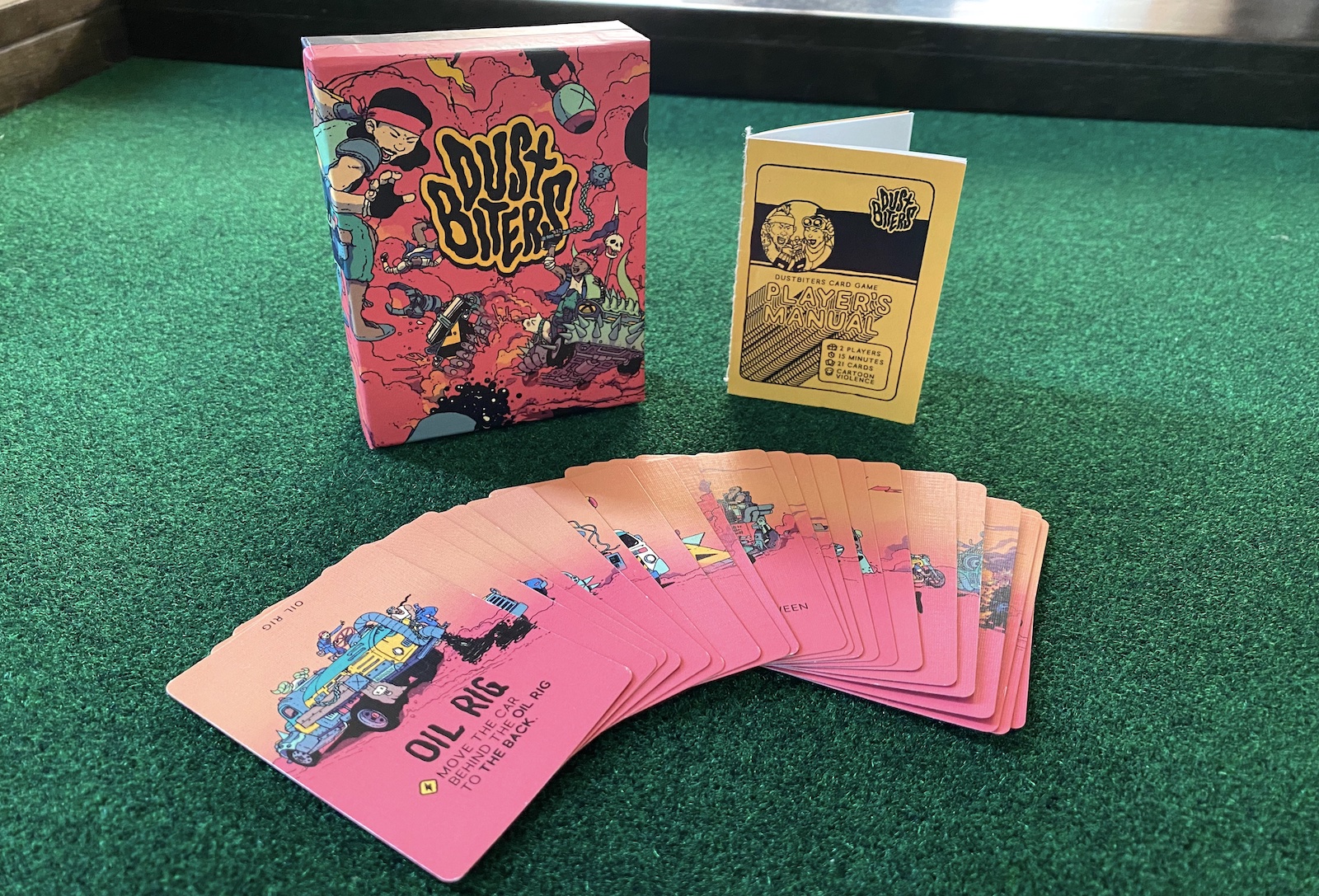 With the rise of smartphones and mobile devices, we’ve seen gaming become more of an everyday activity for folks of all ages, and bite-sized playing experiences have become more commonplace to help fill the time while we’re on the go. While there have always been shorter, more tightly focused tabletop games to be found (such as Steve Jackson’s popular Black Box series from the eighties and nineties), they have really hit their stride in recent years as more casual forms of gaming have grown more popular. That line between digital and tabletop gaming gets ever blurrier, and we’ve seen a lot of large scale tabletop games based on video game properties, and a lot of digital versions of popular board and card games. What we haven’t seen much of is game designers crossing over from digital to tabletop and vice versa, so I was excited to get my hands on a copy of Dustbiters, a very bite-sized two-player card game from indie video game vets Jan Willem Nijman, Terri Vellman, and Robbie Fraser. 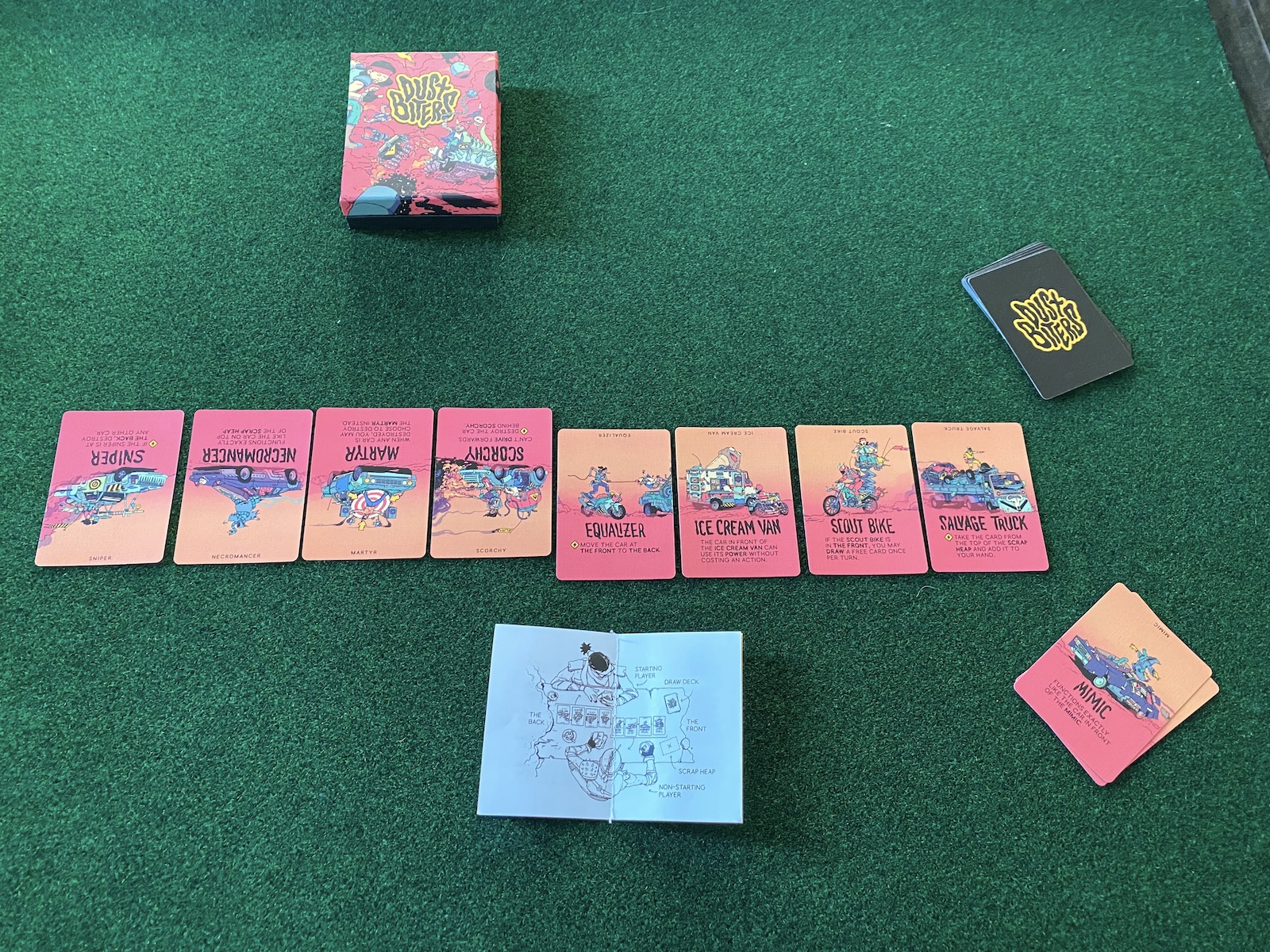 Dustbiters may be one of the smallest, least encumbered games I’ve ever played- The small box has an even smaller inset that holds a scant 21 cards and a 6 page rulebook. Gameplay is simple- each player has four cars (depicted on the cards) lined up in a Mad Max-style caravan and heading in one direction- away from the massive dust storm that destroys the last car in the caravan after each player takes their turn. On their turn, players have three actions to spend in one of four different ways: Build- add a car/card to the front of the caravan, Drive- move one of their cars one space forward or one space backward, switching places with the other car in the direction they drive, Draw- take a card from the top of the draw deck and add to their hand, and Power- use the power described on one of their cars. Players alternate turns until the opposing player’s cars are eliminated from the caravan. A full game takes right around fifteen minutes. The rest of the rules appear on the cards themselves, and most of the fun in the game revolves around the wacky powers each car has. 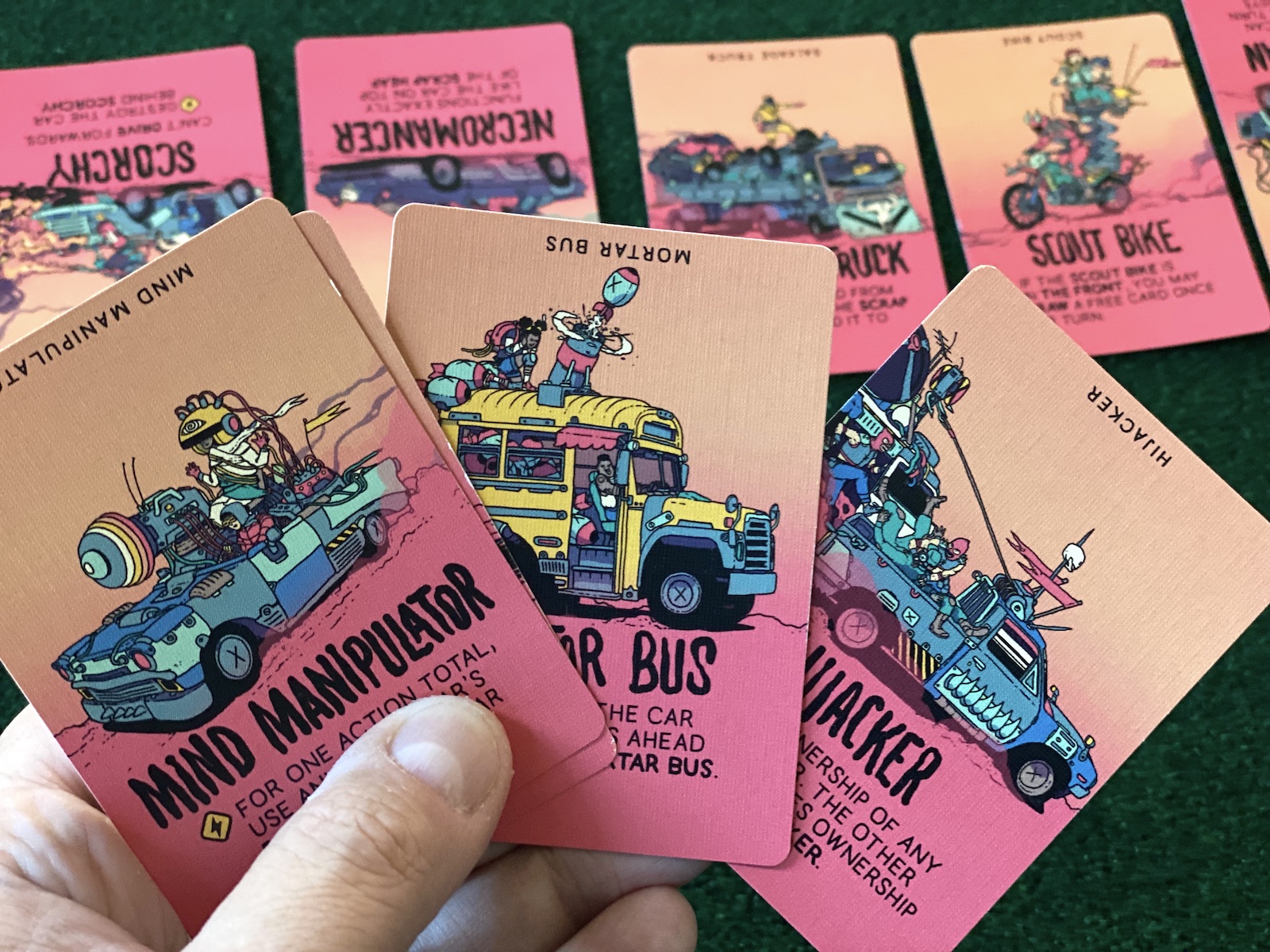 The first time we played, we shuffled the “scrap heap” (discard pile) and added it to the draw pile. After roughly 45 minutes, we realized that this was not likely the way the game was meant to be played, and we were pretty sure it would never end if we kept it up. The rules lacked specificity in this regard, and it is assumed that the deck only plays through a single time, however we didn’t regret this mistake as it gave us some extended time with each beautifully designed card and it’s abilities. A new round with no card recycling yielded a game duration that was more in line with what was advertised, but it seemed a bit odd to have only 5 cards in the draw pile after setting up the 8 cards on the table and the 4 card hands for each player. 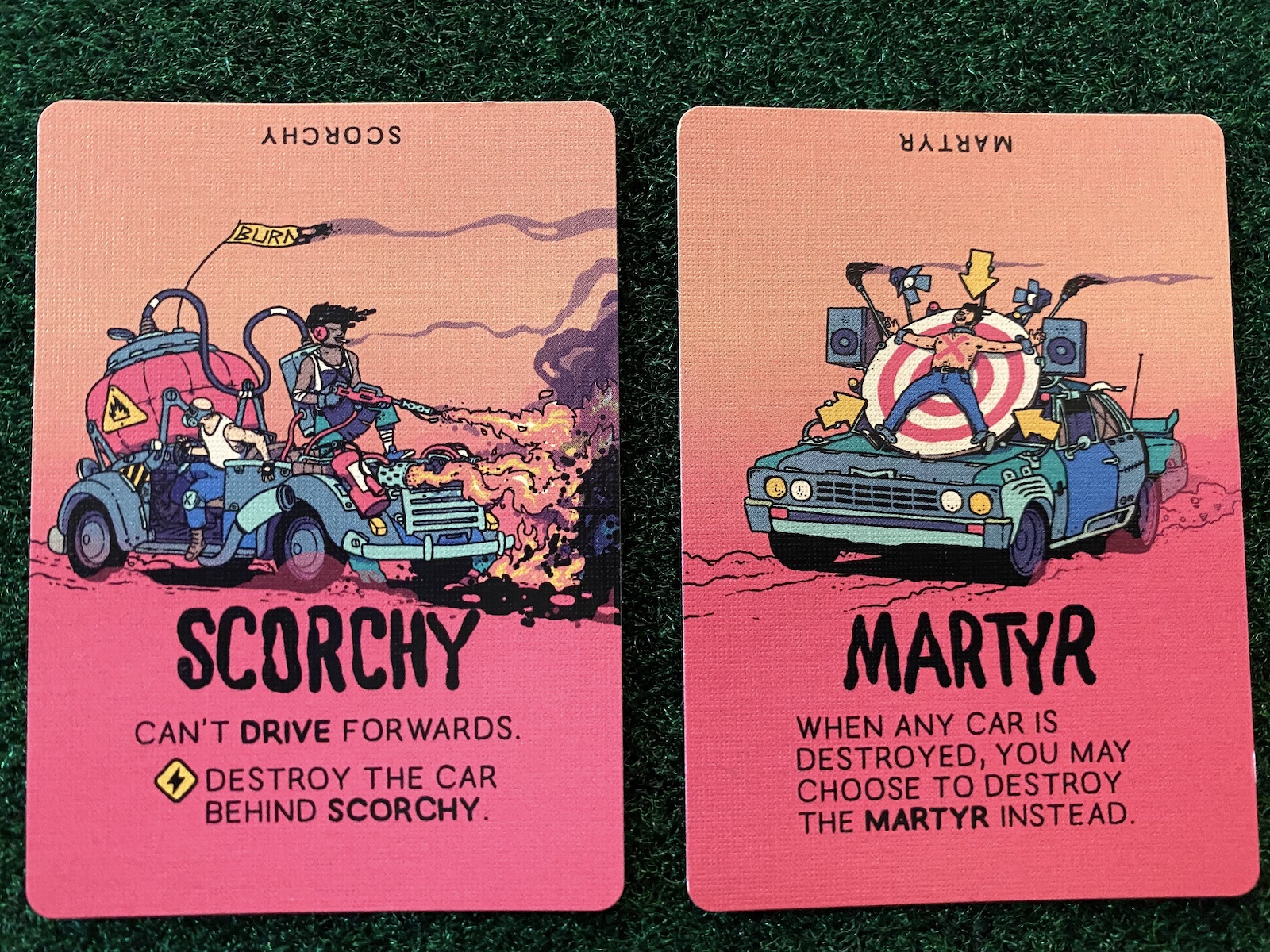 What Dustbiters lacks in size however, it more than makes up for with style, and each card depicts an incredibly detailed quirky-as-hell vehicle and it’s operator(s) on a very bright orange to hot pink gradient- think the same aesthetic as the Rage 2 video game but more cartoony. Car abilities and power descriptions are fun and silly, and some of them lent to laugh out loud moments (such as my wife’s inability to get rid of my ‘Scorchey’ as I kept bringing it back with the salvage truck or mimicking it’s abilities from the scrap heap), as well as some downright icky realizations (the tanks of embryo clones on the Cloning Van- humans clones duplicating car powers? How does that even work???). The overall visual design of the game is as good as anything I’ve seen, which shouldn’t really come as a surprise as iam8bit appear to be the publishers. 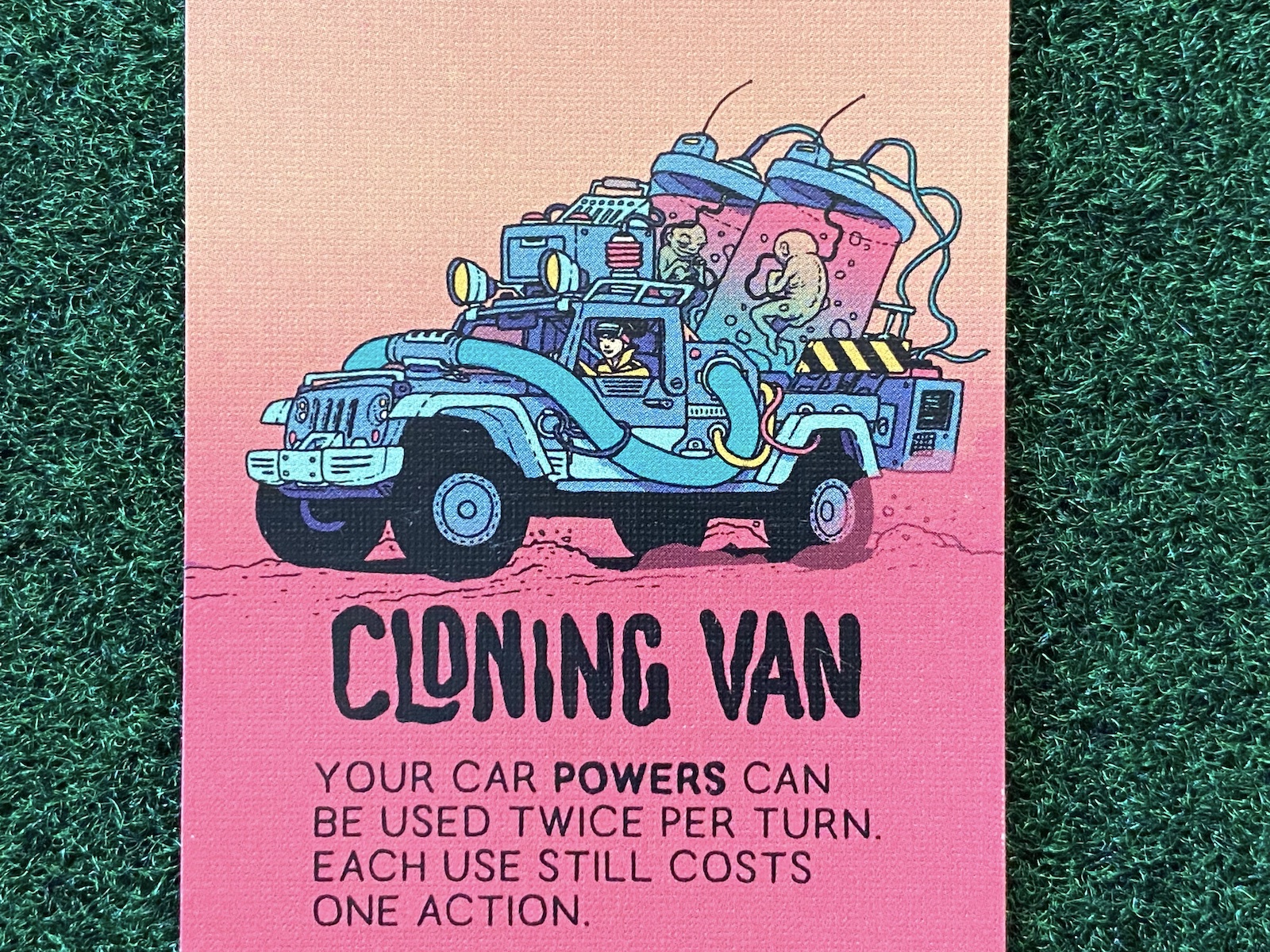 Honestly, the only real problem I could find with Dustbiters is that I wanted more of it- more cards, more car types, more art, more laughs. Clearly, the intention here is to keep play time down to around 15 minutes, and I can respect that, but I very much liked what the game was doing on several levels and just didn’t feel totally satisfied with how much it gave me. Playing multiple rounds of the game helped but still the feeling lingered. That said, it feels like adding cards, even just more of the same cards, would add length to the game as opposed to disrupting balance (which frankly, doesn’t feel like a strong requirement for the game in the first place). Throw in some car types that provide endgame or near endgame results as a power or a one-time ability and the reliance on deck size to constrain play time might become less of an issue. By my reckoning, Dustbiters seems primed with expansion possibilities, and I’m hoping to see some of that with the Kickstarter campaign. 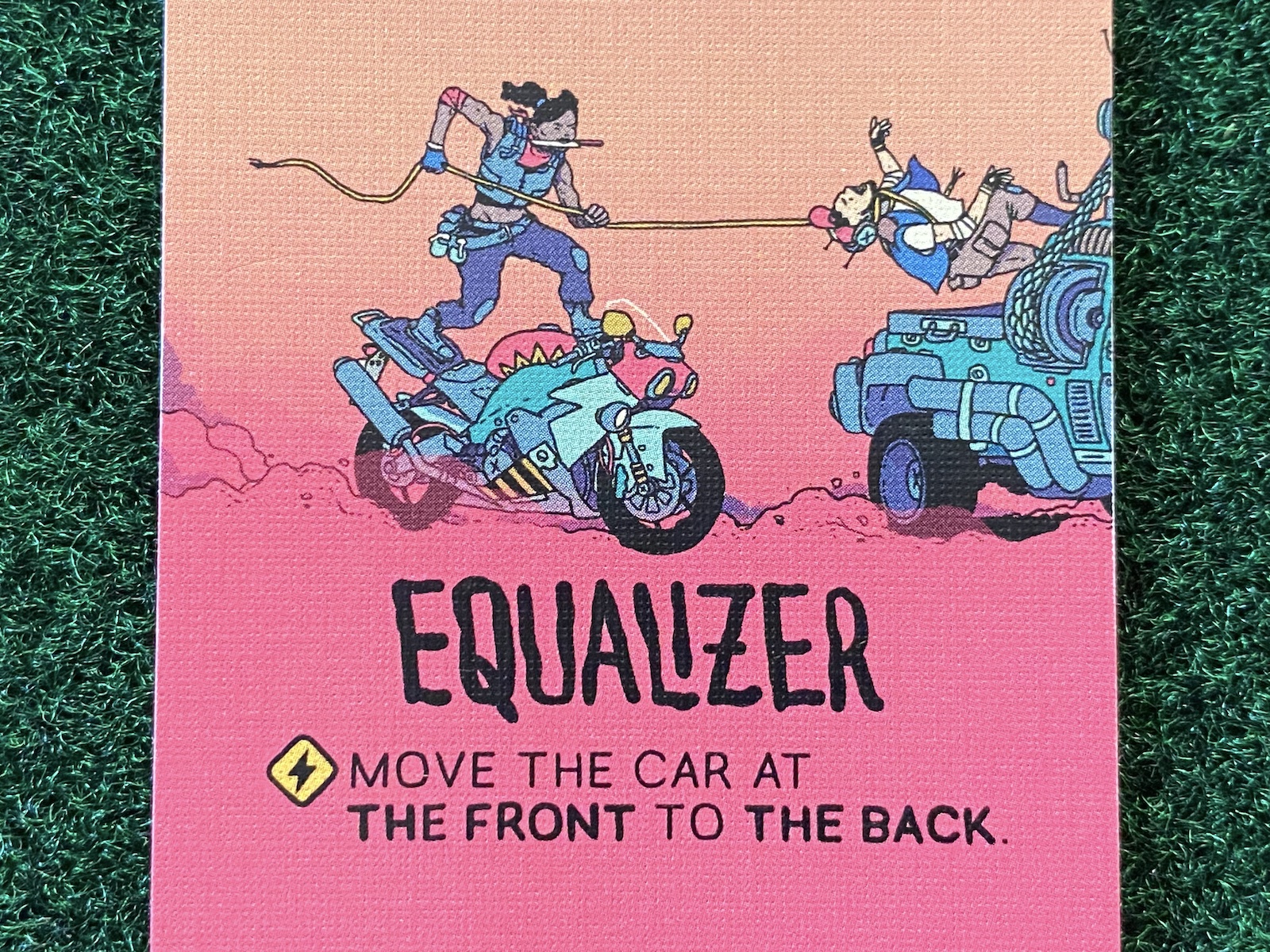 A succinct and stylish 1v1 that practically begs for more cards, Dust Biters hits Kickstarter today with plans to ship this november! A $26 pledge gets you the game, and higher pledges include an art zine, pins, and even a bandana. If nothing else you’ll want to see the awesome promo video Tim Shaefer did for the campaign.