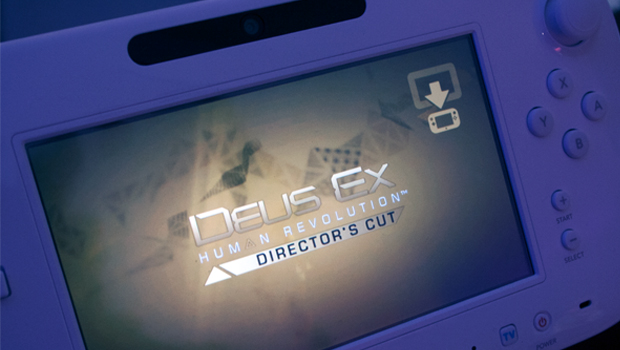 We’re here at NYCC where SQUARE ENIX has invited us for a rare opportunity to test drive a few of their most exciting upcoming titles, including Deus Ex Human Revolution Director’s Cut and Thief. It’s a good day.

I don’t think enough has been said about this impressive new version of the sci-fi epic, coming out Oct. 22nd for the Wii U, Xbox 360 and PS3. Having already played and thoroughly enjoyed the original 2011 release of Deus Ex: Human Revolution, I was as skeptical as anyone picking up the controller (seriously, a director’s cut of a game?). But after playing around with the new touch-screen features, taking in the improved graphics and augmenting my way through a boss battle against a ripped cyborg named Barrett, I’m seriously considering picking up this title…again.[singlepic id=16579 w=320 h=240 float=right]

First of all, it actually lives up to its Director’s Cut status. This version has all of the previous DLC content including the weapons upgrades and the additional story lines. It also allows players to keep all of their upgrades for future playthroughs, so now you can finally build that ultimate Jensen-cyborg  you’ve been dreaming of. There’s even a maker’s commentary track that pops up at the top-right of the screen giving new insight into the development process, something I’ve never seen before.

And I have to say that this has some of the best use of the Wii U’s Gamepad I have ever experienced. Unlike most Wii U ports that waste the opportunity of a second screen on useless maps and item screens, Deus Ex: Human Revolution Director’s Cut actually implements the touch screen, making it into a truly integral part of the gameplay. I was delighted by the use of the Wii U’s gyroscope and how it allowed me to see through walls using Jensen’s augments, and the way the touch screen makes hacking computers feel like I’m actually hacking (albeit, Hollywood-style hacking, but hey, it’s fun). This version also includes the entire strategy guide built in which can be accessed at any time and left on the Gamepad screen even as you’re moving around. I can’t even tell you how awesome that is.

[singlepic id=16580 w=320 h=240 float=left]I was impressed to see the PS Vita and even an iPad wirelessly rocking out the game in much the same way that the Wii U’s Gamepad does. Using the PS Vita as a controller took some getting used to, but the game played exactly as expected and it’s a cool option for PS3 and Vita owners.

Tucked away in one of the darkened corners of the Square Enix Showroom was a demo of the upcoming stealth title, Thief. I got a chance to rummage around the city, climbing buildings and keeping to the shadows. The game looks and feels a lot like a first-person Assassin’s Creed, or rather, Skyrim meets Assassin’s Creed. The graphics are very impressive with no slow-down while playing on an Xbox 360. There’s a high level of interactivity as you traverse the darkened and foreboding medieval city. You’re able to gather objects and throw them to distract guards, climb ropes, peek through key holes and pick locks (you know, thief stuff).[singlepic id=16581 w=320 h=240 float=right]

Light plays a large role in the game, or more specifically, the lack of light. You use the darkness to hide from guards or the people you’re busy stealing from. Visibility is indicated on the bottom left of the screen. Spend too much time out in the open and you’re bound to raise suspicion.

It’s a lot like Metal Gear Solid; you peek around corners and take out guards, either from a distance or by creeping up behind them. The A.I. is top-notch and you’ll need to hide bodies where no one can stumble upon them to avoid raising suspicion. The game encourages different styles of play, whether you’re a stealthy lurker or a hardened fighter and it’s even possible to beat entirely without chalking up a kill score. Thief is still in development and there wasn’t much background regarding the storyline in the demo, only that the main character, Garret, has a lot of questions to ask and a lot of guards hunting him down. This mischievous title is scheduled for release in February 2014.