Michel Ancel makes games I want to play.  He invented the gaming icon Rayman, developed Beyond Good & Evil (a franchise that was a commercial failure but a cult hit), and even created the hilarious Rabbids for the Raving Rabbids series.  Ancel and his team know how to make games that are whimsical, engaging, and just plain fun.

After four primary titles, five offshoot games (Brain Games, Arena, Golf, Bowling, and Rayman Junior), and six Raving Rabbids spinoffs, Ancel and Ubisoft decided that it was time to give the Rayman series a proper reboot.  The game is slated to release later this year, but in the meantime let’s visit the world of Rayman, Globox, Darktoons, Teensies, and the Glade of Dreams.

“Don’t listen to him! I’m the king of the Teensies!”

After the very musical intro, the first thing you’ll notice about Rayman Origins is a return to the classic 2D roots.  Rayman Origins is a side-scrolling platformer that is built from the ground up to support up to four players simultaneously.  Playing as Rayman, Globox, or as a teensie, you’ll run through the 60+ levels in the game, working with up to three of your friends to open up secret areas, collect Electoons and Lums, and even pick up teeth from the Land of the Livid Dead!

The story so far is simple – The Master has fallen into a confused deep sleep and he’s blowing bubbles again.  To help him snap out of it, Rayman and his friends will have to collect a TON of Electoons.  It’s time to get side-scrolling!

Heading out from the Snoring Tree (where the Master is levitating and blowing bubbles), Rayman sets out to rescue Head Nymph Batilla, reintroducing you to his colorful world.  Shortly into the level you run into a caged Head Nymph Batilla.  Chasing after her and finally freeing her teaches all of the characters how to do a basic attack.  (Rayman throws his trademark disembodied hand, Globox reaches out and slaps someone, and the Teensies use their hilarious magic)  As the tutorial gives you basic instructions (in Pig Latin!) you’ll set off to try to find Lums.  The Lums are the sleeping collectables in the game that you’ll turn in to get additional Electoons.  Electoons and Lums are pretty much the currency of the Glade of Dreams.

Rayman Origins is a straight up classic side-scroller.  Making your way from the left hand side of the screen to the right, you’ll

collect Lums, collect giant coins that unleash even more Lums, collecting giant Lums that trigger a bizarre song that doubles the value of each Lum for a short period of time, and the occasional cage full of Electoons to rescue.  In fact, as you move through the levels you’ll hear them quietly murmuring “Help Me!” giving you an audio queue that they are hidden nearby.

At the end of every level your selected character and their partners will pose for a classic beach boardwalk picture while a nearby Teensie in a wizard hat counts the number of Lums you collected.  These Lums are turned in to give you bonus Electoons.  Since these Electoons unlock extra characters and costumes, hidden higher-difficulty levels, and even the occasional secret treasure.  The secret treasure levels really test your platforming skills, but here is the great part – there is almost no penalty to death.  Given that there is over 60 levels to play through, and the game is meant to be witty and fun, so dying simply puts you at the beginning of that level.  There are mid-mission checkpoints such as the secret Electoon areas, but the levels are all about 15 minutes long so you aren’t losing out on a lot of progress.

In an obvious nod to Super Mario Bros. 2, you’ll navigate a simple overworld map and select the area you want to tackle next.   Since you’ll need a certain number of Electoons to unlock the next area, the next world, or the secret treasure areas, you’ll want to take your time and collect those Lums!  Getting to subsequent areas unlocks other moves like gliding (courtesy of Holly Luya, the Music Nymph), so going back and revisiting previous levels is a must to get all 250+ Electoons and the 10 Livid Dead teeth to grab in the game.  In another nod, but this time to the New Super Mario Bros on the Wii, dying while playing co-op means your friend will be trapped in a bubble that needs to be popped to rescue them.  As long as one player survives (which can be hard on the faster levels!) you are free to keep playing.

The game is beautiful to look at, but there is no doubt that the polish doesn’t stop there – the music, sound effects, and the Pig Latin tutorials make this game as much an auditory feast as a visual one.  The foreground and the background are alive with life as well, with transitions between areas similar to old school Sonic the Hedgehog titles.  Even the load screens are a heavily stylized black and white silhouette version of the world – you won’t see it much given the extremely short load times.

There are two things about this game that should absolutely make you want it for your holiday gaming list – four player cooperative play, and the parts in between worlds.  Obviously you can’t have a side-scrolling platformer without boss battles, right?  How about finishing the level, being picked up by a strangely disgruntled looking mosquito to fly through an awesome R-Type inspired minigame that ends with a bird that looks “very angry”?  Sucking in missiles to shoot them back at enemies and shooting peas at the others is just the start of the craziness.  When you take out the boss battle you get what I’m going to dub the ‘candy’ level.  Doing a high speed run from right to left while collecting Lums en masse and bouncing off of strange pink clouds and mushrooms gives players an insane reward for their efforts.

The game may not be out for a little longer, but it is clear that Ancel and his team are rebooting it properly.  It was a surprise to see it resurface at E3, and getting some hands-on time with it only solidified that Rayman is back! 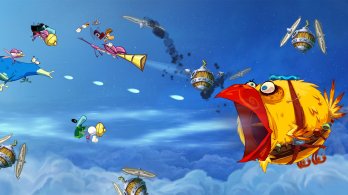 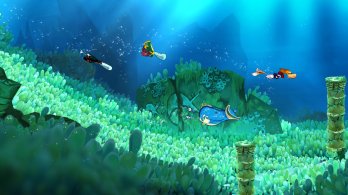 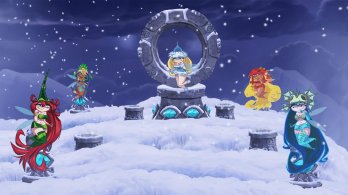 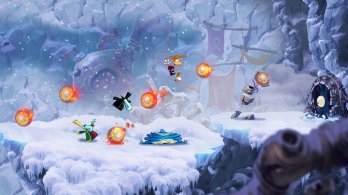 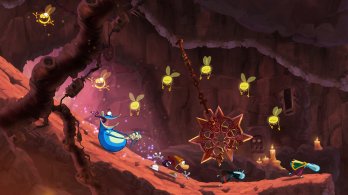 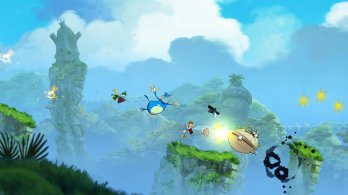 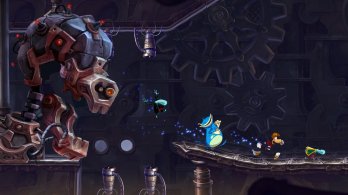 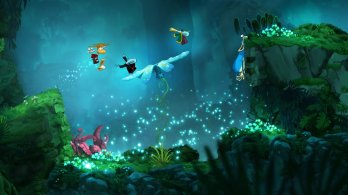 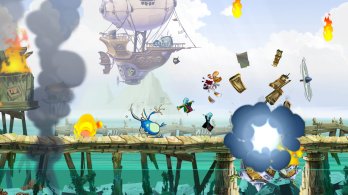 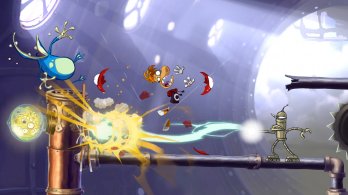 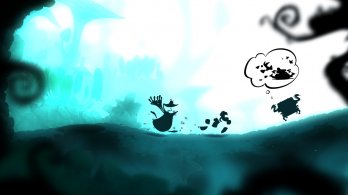 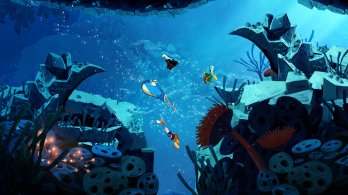