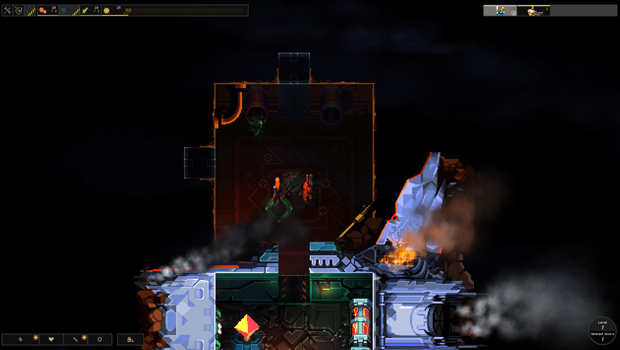 What do you get when you cross a roguelike dungeon crawler with a tower defense game? You get the Steam Early Access title Dungeon of the Endless, currently in alpha phase. Developed by Amplitude Studios (previously known for the indie 4x title Endless Space) DotE combines room-by-room dungeon exploration, randomized layouts and the permadeath aspects of traditional roguelike games with the tactical defense-building and wave-invasion experience of the tower defense genre. I’ve managed to get in some hands-on time with this one, and while there’s still a ways for the game to go, it’s clear that this is shaping up to be an original game no matter what happens. I really can’t think of another title that’s like it.

The first thing I noticed about DotE was the art style: well-animated if low-res pixel art dominates the game, accented at times with special effects of a more modern variety. The combination is a little jarring at times – it’s strange to see nice, crisp menus and text alongside blocky pixel art, sometimes with as little as 20×20 scaled-up pixels – but it certainly makes the game memorable. After getting used to this unique blend of art techniques, I start to take stock of where the game initially places you: in a single room with two controllable characters, along with a crystal that functions as the ‘important gizmo to defend at all costs’ typically seen in the tower defense genre. One way DotE differs from normal tower defense games is owed to the fact that this crystal can be moved by the characters you control – and in fact, to advance to the next level of the ‘dungeon’ you’re going to need to have one of the characters pick this crystal up and lug it to the exit point. It helps power the various devices you’ll be setting up throughout the game – and it also happens to be what enemy creatures will try to damage at all costs. As you’d expect, if the crystal dies, it’s game over.

DotE’s dungeon crawling is very much a room-by-room affair. There’s no freely walking around within a given room – you’re either in a room or you’re not, and if you’re in one, you’ll be dealing with whatever interactive objects or characters may be present. Once you enter a room, the fog of war will peel back and permanently display at least its general location on your screen – keeping you from having to remember how to get back to your precious home base. The two characters you initially control can be moved independent of each other, allowing you to explore more than one new room at once in the dungeon – but I generally found it safer to keep the initial duo together to deal with the inevitable discovery of hostile creatures, or an incoming onslaught of beasties intend on devouring the aforementioned power crystal. In true roguelike fashion, if one of these characters dies, that’s it – they are gone for good. You may come across some other characters who can join your party in the course of your dungeon delving – but losing all of your characters brings the game to an end as well. So, both the crystal and at least one hero has to be protected at all costs.

And you have a few interesting ways to ensure the safety of both characters and crystal in DotE. For one thing, your characters follow typical RPG rules – they can be leveled up to enhance their stats, they can be equipped with up to three pieces of gear (Typically a weapon, armor, and a miscellaneous device), and it looks like there are also plans to add active and passive skills to them in a future build. Right now they simply come with a smattering of statistics (health, defense, speed, strength, etc), some unique animations, and their own personal backstory. In addition, structures can be built in a ‘chain’ stretching out from the original power crystal – adding room defenses that will passively attack invading creatures, or structures that will add to the amount of industry or food (two pieces of DotE currency) you accrue every time one of your characters opens a door in the dungeon. Industry can be spent on building additional structures, while food is usually used to heal or upgrade your NPCs.

All in all, Dungeon of the Endless comes across at this stage as a pretty gutsy experiment in genre mixing – trying to find a balance between the incredibly popular tower defense style of gameplay, along with the (while gaining popularity) far more nichey experience of roguelike games. As it stands, Amplitude Studios is off to a good start with this one, and we’ll be keeping an eye on it as work on the title progresses.