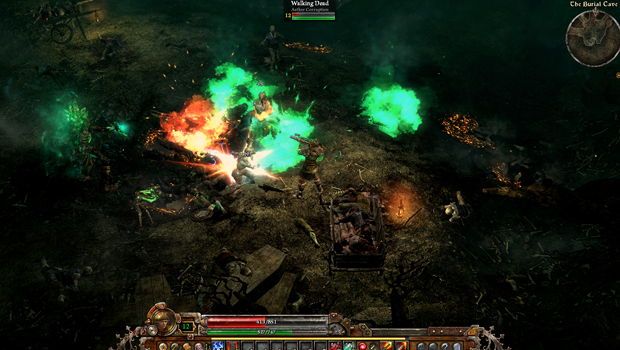 Crate Entertainment’s Grim Dawn continues to develop as a Steam Early Access title, slowly adding features, acts and content as it makes its way towards its inevitable release later this year. This is a hack-and-slash, loot-centric game that’s firmly situated in the niche that Diablo III, Torchlight II and Path of Exile occupy – a genre that happens to be the closest thing to pure, uncut gaming crack where I’m concerned. After hours of playing around with this still-unfinished but largely-playable game, my experience is clear: Grim Dawn is shaping up to be a solid take on good old-fashioned dungeon-crawling, managing to pick up the better points of both Diablo III and Torchlight II while adding a few unique twists of its own in the process.

Grim Dawn drops the player into a world where humanity is not only on its last legs, but finds itself in a situation more dire than even the perpetually-threatened-by-hellspawn Sanctuary of the Diablo series. A good share of the worst possible outcome has already come to pass for the humans – their once-glorious empire shattered thanks to a conflict between two powerful forces, one of whom wants to possess humanity for their own ends, and the other who wishes to wipe humanity out before said possessions can happen. Here’s a good way to illustrate how bad things have gotten for the humans: the preferred currency in this world is ‘little chunks of scrap metal.’ While this won’t be covered in a typical macroeconomics course, I can promise you that once a society is at this stage you can be certain everyone is quite screwed. The surroundings, the story, and the essential feel of the game drives this point home – Grim Dawn takes place in a hellhole populated by people desperately hanging on to the vestiges of civilization. It’s alien and exotic to experience, at least for those of us who don’t live in Detroit.

Most of the systems in Grim Dawn will be largely familiar to anyone experience with the genre. You’ve seen it all – the grid based inventory system, complete with the auto-sorting feature. The numeric task bar where you can drop your items or skills, or bind them to mouse buttons. The skill system is a bit more unique, choosing to swerve in the direction of the Torchlight series more than Diablo III – as you level up, you can throw skill points into one of (currently) four classes, choosing either to invest in the base class itself in order to get passive bonuses and unlock more skills, or invest in the unlocked skills to increase their potency. Multi-classing opens up at level 10 as well, allowing players to mix and match skills and abilities to further customize their character. You also gain the ability to increase one of three core stats on each level-up, roughly approximating to ‘health and melee damage’, ‘accuracy and ranged damage’ and ‘all things magical’. It’s a solid system, but at most it’s a spin on a well-tested and easy-to-grasp formula, but with a bit more experimentation available than in most other games of its kind.

Now, there’s a part of me that wants to downplay the world and story of Grim Dawn. I mentioned earlier that these kinds of games are a drug for me, and I know the part of the fix that gives drives me on – the loot. Weird, exotic, shiny, well-crafted loot, the rarer the better, and ideally it should do bizarre and crazy game-changing stuff for me, particularly if it’s part of an item set. The story? Usually it’s a feat if I even so much as pay attention to it during my first playthrough – once people start yammering about this or that threat, it’s my cue to start slamming the keyboard to figure out what button will shut everyone up and get me back to killing stuff and rolling the dice on drops. This isn’t a personal quirk on my part, but what these games have conditioned players to expect out of such games: the fun is in the killing and the loot-sifting, and just about every developer knows this and tries to provide the best gambling experience.

Grim Dawn feels a little different. For one thing, there are actual quests you can pick up during the course of the game. More than one quest at once, in fact, which honestly felt odd – lately the dungeon crawlers have been brutally efficient in their linearity, directing you from point A to point B with, at best, an optional side-quest in between. But Grim Dawn actually expects you to play by some rules that are so old school, other titles have already phased them out – kill 15 zombie soldiers, scrounge up some necklaces… we’ve all been there before. As weird as it is to say, it’s a welcome change of pace. Sure, it’s not the most innovative thing in the world – if anything, it’s a throwback to a kludgier time – but it actually made the game more endearing to me. It made me pay more attention to the world, what was going on in it, and reminded me that I was, as a matter of fact, playing a role-playing game where I was taking on a role in a world, rather than just playing the world’s most circuitous game of craps. Don’t get me wrong, I still want my loot, and I want it to explode out of the chest of a monster I just buried a hatchet inside of, but it’s nice to have some challenges and other-things-to-do along the way.

That’s the best thing I can say about Grim Dawn at this stage of the game: it just feels right. It’s not groundbreakingly innovative, but Crate Entertainment is managing to hit most of the notes that make dungeon crawling so compelling – an interesting world, customizable characters, loot and even crafting – while still engaging the player with the world. The game is shaping up to skew towards a single-player or friends-only co-op experience, rather than the largely impersonal quasi-MMO grind that Diablo III is, and this is a welcome development. It means that fun can take a priority over strict balance, which is probably why the title boasts a faction system where you can ally with some in-game organizations (and consequently make others hate your guts), opening up the possibilities of different quest experiences, and quite possibly different environments or even abilities and loot to go with it. If you’re looking for a loot-grabbing, dungeon-skulking experience in a dark, dank world that feels like Dark Souls with rifles and handguns, keep your eye on this one.