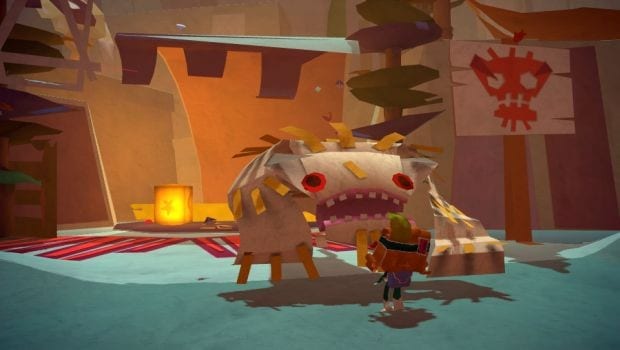 If you’ve not heard of Tearaway, it was announced at Gamescom this year and you might have missed it. Normally I’d say we got “Hands-on” with a title, but really I’d like to say “fingers-on”. Tearaway, the newest title coming from Media Molocule, is unique. When I say unique, I don’t mean it’s a little different than any other title, I mean there is nothing else like it. Tearaway is an adventure title that is all about paper. Folded, cut, crumpled, and everything in between making a world that you can not only touch but feel. Let’s take a closer look at Tearaway.

[singlepic id=10428 w=320 h=240 float=left]Rex Crowle, Lead Creator on Tearaway gave us a good look at the backstory of the game. Meant to be the playful intersection between the real world and the game world, Rex’s aim is to make a place where you can imagine that you are holding the objects in the game in your hands. The concept came from the mountain ranges of trash that inevitably comes from discarded concept art and paper that is generated during the creation of a game. With the whimsy of the team behind Little Big Planet behind the helm, you can be sure they can do exactly that.

The game is about a messenger on a delivery adventure. The character, Iota for the male, and Atoi for the female messenger (that’s French for “To you” for those playing the home game) is on a mission to deliver the message that is in their head to you, the player. The game is set up like a ‘buddy movie’ with you as the second half. Since the world is literally in your hands, you’ll have to help your little paper friend by tilting the world, punching through the paper with your fingers, swiping parts of it away, blowing to create wind, yelling at enemies, scratching a DJ table, lifting a fallen bridge, cutting out a crown for a squirrel, and many other real world interactions to help Iota or Atoi in their adventure. You’ll be using every part of the Vita to play this game. In one example we saw a plain papercraft elk get a new skin of spots courtesy of a real-world picture of some polkadotted wallpaper we took with the rear camera.

[singlepic id=10423 w=320 h=240 float=right]The story focuses around ‘rites of passage’ and inspiration from folk tales and half-forgotten stories. Since many of these stories were missing pertinent detail, the team at Media Molecule simply filled it in their way for you to uncover as you go. With an open-world feel full of small playground areas for the player to experience, the level we got to play never felt constrained – something I hope extends to the full world.

The demo level is a different one from the debut shown at Gamescom. This area is the second major level of the game – a placed called “Sogport”.   This mysterious and dangerous island has been marooned in a sea of thick glue. The island is gradually shrinking as the inhabitants tear away the paper landmass and use it for different things – an idea place for our adventurer to join in and help.

Glue is the major theme of Sogport.  Thick and deep glue is obviously bad for a paper character with little paper lungs, but a thin glue (like the kinda you’d streak on paper with a glue stick) gives little Iota the chance to run across surfaces he might not normally be able to traverse. This becomes pretty important when you encounter “Wendingos”.

[singlepic id=10421 w=320 h=240 float=left]Wendingos are a mythical creature that pops up in a lot of folklore, but there is no definitive account of what they look like, so the team used it as a ‘blank sheet of paper’ to make their own version. Wendingos love pearls, so we’ll use that as our way to handle them, since they are easily three times our size. Rolling as a crumpled paper ball through the environment we used pearls to trap the paper behemoths inside little folded paper presents (complete with bow), allowing us to reach new areas. Crossing a giant paper skeleton bridge, the Wendingos eventually get tired of our narrow escapes leaving them to try to squish us with large thrown balls of paper. Using the front touch screen we peel off an area in the environment to close out this section of the adventure.

Everything about this game speaks to its attention to detail. Everything looks like you could make it with paper in the real world. Doors are sometimes little spirals of paper that wrap up to let you through. The flowers look like cut up paper cups that have paper strips holding them up.   Iota and Atoi’s heads look like little paper envelopes (hence the message inside) with little strips of curled and folded paper to make up their bodies. To help bridge the gap to the real world, the plan is to make crazy papercraft trophies in the game that can be printed in the real world to create your own version [Ed. — You can actually print up two of these papercraft trophies right now: the Wendigo Mask, and the Elk.]. Everything in this game can tear, unfold, flex, and react like paper – it’s not just the look, but the very soul of the game. While we won’t get the mod/creation engine like we did in Little Big Planet, Tearaway looks to take the 4th wall by a rough edge and tear it right off, crumple it up, and throw it away.  I can’t wait to get my hands (and fingers!) back on it sometime in 2013!