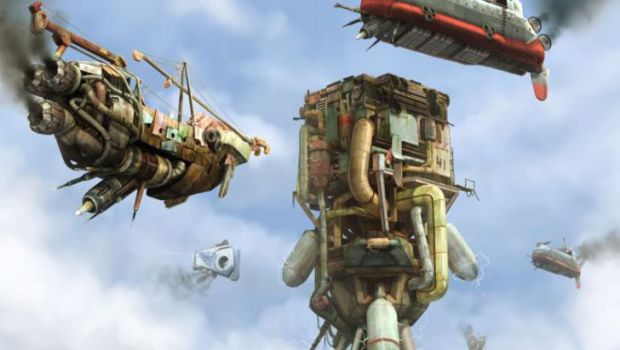 While there are a lot of free-to-play games that are bad, free early access to any game is generally very good. However, the combination of the two is always fantastic. Recently I was able to get in a few rounds with Cliffhanger Productions Creative Director, Executive Producer, and founder, Jan Wager, and discuss the company’s newest offering to the free-to-play ecosystem.

The core gameplay of Aether: Clash of Champions, centers around a fighting network simply called The Games, where teams of airship-borne warriors hailing from wildly different backgrounds (and more often than not, Aether-enhanced anatomies) battle it out on a series of Aerenas under the command of you, the captain. Before competing with the man himself, Jan suggested I familiarize myself with Aerena to get my legs under me, for which I was thankful.

Even through the tutorial missions of the game, which are competently strung together with a series of motion comic frames, I was impressed by how involved this game could potentially be. Everything on the screen possessed some sort of tactical benefit or vulnerability, from the dimensions of my selected ship, to the layout of the Aerenas themselves. Jan later explained to me the reasoning behind this was it was amongst the development teams objectives to avoid a players ability forge some sort of “ideal” combination of elements that could face down any opponent or scenario, a goal they’ve certainly succeeded in achieving. While I was  able to move through the early tutorial missions tasting only the sweet nectar of victory, that didn’t mean my AI opponents hadn’t punished me with their share of surprises… foreshadowing what I would be in for when I took on Jan himself.

When I felt I’d shaken off about as much noob as could,  Jan and I arranged a match between us and the gaps in my strategy tumbled around me like dominos. Jan’s selected Champions blew holes through tactics I had thought, during my brief tenure in Aerena’s world, where rock solid; electrocuting my fighters through barriers, using ship deployed items called “Shells” to not only damage, but swap the positions of our Champions to shatter my perimeter, or even drag them across stage specific threats to double damage with half the effort. At one point, when I placed my valuable ship (and the core target of any battle) behind my toughest Champion to avoid a ring-out while defending it from direct attack, Jan used my tactic against me by battering my Champion against my ship, crippling them both with squash damage, before using a special technique to knock my warrior into the abyss anyway.

It was a scene so pathetic I could only laugh at the absolute nature of my defeat, but as I did it was without anger or frustration, because at no point did I feel like I didn’t have a fighting chance. Even when I knew the odds where too stacked against me to find victory in this battle, I felt excited at the discovery of a new technique for the next encounter, which thanks to the fast pace of the game (on average ten minutes), was only a little while away.

After a handful of embarrassing rounds, I asked Jan about some of the details of the game I’d been curious about; such as how big the roster of Champions was planned to be, how much content Cliffhanger defined as “free” in a  free-to-play game, and why an Aether-punk setting at all? Jan cheerfully informed me that after Aether: Champions of the Aerena’s public Steam release this April 30th, new content and features should roll out smoothly over the next few weeks. That would include 15 new Shells for use in battle, a Champion rotation system allowing players to experience all of  the games estimated 40 Champions, including player designed Champion “Luna”, without conditional victories or purchase, and friends lists so that fans can challenge specific players and friends to duke it out in the skies. iOS and more Android phone support is also expected to be available by the end of May, which in addition to tablet support, gives this title an impressive bevy of cross-platform options.

More campaign-like features are also going to be included to further flesh out Aerena’s unique world. Jan let me know the team selected the Aether-punk setting to give the title just a little bit more of its own identity. Divorcing itself from aliens and elves lets Aerena stand out amongst other fantasy settings and lets players approach it in a different or even new ways. Of course, those are story points which the game still hasn’t zoomed in on enough to make much of a difference yet, but it has still inspired artistic and music design choices that brim with character and wonder.

Even though an income of some sort is obviously needed to support the project, Jan assured me that the minds at Cliffhanger value “players over payers”, and that all the content of Aerena will be available in-game without outside dollar purchases. A fun, in-depth, well designed and well executed game that only costs the price of the electricity to turn it on? Color me sold.