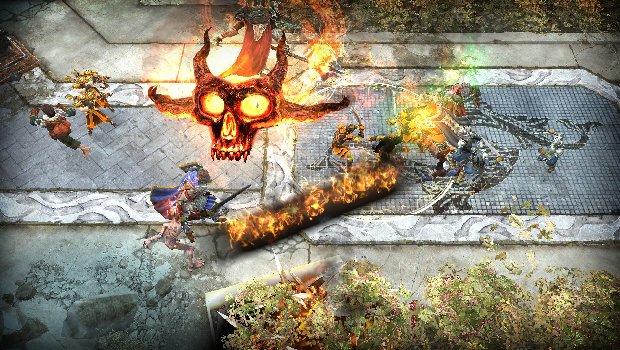 Guardians of Middle-earth, the MOBA set in the incredibly popular good-versus-evil world of Tolkien, will soon be launching on the PC – and those of you who are curious about just how laning, ganking and tower-diving goes down in the mother of all fantasy worlds, this one’s for you. I managed to get in a few hours of hands-on time with the PC version of Guardians, and I’m happy to report that – some minor bumps aside – the game actually manages to be a refreshingly original alternative to the usual spread of MOBA heavyweights. It’s not just the world and the lore that sets Guardians apart from League of Legends or DOTA2, but fundamental twists in the core gameplay as well. We’ve got details the share including screenshots and gameplay footage, and I only had to die some 20 or 30 times to get you this information. A small price to pay.

From Gandalf to Sauron, you have options.

Guardians of Middle-earth may be finally coming to the PC, but of course this is game which has already seen a release on the consoles – along with a considerable amount of bug-fixes, enhancement and addons. That means the game will be coming out with far more champions available than is usual for many freshly released MOBA games, and when all the DLC is accounted for the initial champ roster is weighing in at over 30 different characters, spread across 5 broader classes of “Guardians”. Some highlights include Sauron, Thorin, Bilbo, Frodo, Wulfrun, Gollum and Galadriel – in other words, some of the most memorable characters from the books and movies, regardless of which ‘side’ they were on in the canon conflict. The list isn’t exclusively humanoid either, as the spider Unglob makes an appearance as well – standing out against an assortment of otherwise two-legged, or at least two-armed character choices. Naturally, each of these individual champions comes with their own stats and abilities, with the latter coming in the usual form of ‘1 passive, 3 active abilities, one ultimate/supremely powerful ability’. Topping it off, each character has an alternate skin available – and while the models are certainly vivid and have character, the skins are about as traditional and straightforward as the original models are, as opposed to the zanier designs typically seen in other MOBA games.[singlepic id=15229 w=320 h=240 float=left]

As mentioned, the 30+ characters are divided into five different general ‘types’ – warrior, striker, defender, enchanter and tactician, representing characters whose skillsets and statistics are geared more towards nuking, or soaking up damage, or playing support roles, and all the usual varied options you’ll want your teammates to have appropriately represented in the lanes. So far this all likely sounds pretty familiar to anyone who’s played their share of MOBA-style games before, and in truth, it really is. What really sets Guardians of Middle-earth apart from the rest of the pack, however, is in its approach to both item-building in-game and the usual skill-point allocation meta-game. In particular, Guardians of Middle-earth skips this altogether: there are no items to buy in the middle of a match, and no skillpoints to assign out of the game. Instead, you select a combination of gems, relics, potions and commands for use during a match, and you’re locked into your initial selection until the end of the game. While some players will probably miss the ability to equip themselves in direct response to the opposing team’s makeup and actions, others will probably enjoy the shift away from gold-earning and item-buying to simply focusing on tactics and strategy.[singlepic id=15224 w=320 h=240 float=right]

The relic + gem system deserves some additional commentary. Much like the classes themselves, gems are loosely grouped under “assault, finesse, hardiness, ability and utility”, and each type of gem comes with a variety of different options under its respective class. Assault gems tend to focus on physical and basic attack damage, while hardiness gems confer more defensive bonuses to the champion. Relics, meanwhile, are 2 to 4 slot ‘containers’ for gems, which you can fit into your 7-slot equipment bar. The relics confer additional powers, at the cost of only allowing gems of specific color into each of the relic’s own slots – so the precision relic may grant 15% critical chance, but require that you only use red gems for the 2 slots it takes up. There’s a large number of gem and relic combinations that can be assembled depending on how you plan on building and playing your champion, and each piece of equipment requires gold to be spent in the in-game store to permanently unlock them for use. In addition to these, there are also commands and potions available for use – 4 commands can be selected from a list of 16, all sharing the same cooldown timer, and each giving an on-use bonus that may help out in a pinch. Potions function much the same way… but after being used, they’re gone altogether. Not just for that match, but until you spend gold to buy replacements.

While Guardians of Middle-earth sets itself apart in terms of core gameplay mechanics, it also distinguishes itself in terms of its general approach to the MOBA genre. While there’s usually a near-exclusive focus on competitive play in typical MOBA games, Guardians feels more like a title that was meant first and foremost to be a true and actual game. For one thing, the game has achievements – in fact, it’s absolutely loaded with them. There are 12 ‘challenges’ to complete per character, varying in specifics depending on the general class type said character falls under. In addition, your profile page tracks various ‘accolades’ like your longest assist streak, the most damage you’ve ever taken in a match, and more. These sorts of accomplishments are typically downplayed in other games in the genre, as they threaten to distract players from the all-important goal of winning at all costs – and more than most other games, MOBA players are more likely to demand nothing less than perfection from their teammates. That sort of attitude may no doubt surface in Guardians of Middle-earth as well, but it seems a bit more out of place than it would be in a more explicitly “serious business” competition-focused game.[singlepic id=15225 w=320 h=240 float=left]

In fact, while Guardians has the usual 5v5 (3-lane and 1-lane, PVP or co-op versus bots) options, there’s also a strictly-cooperative survival mode. Here, you and up to four other players deal with progressively more difficult waves of NPCs, trying to keep up friendly towers while clearing out enemies and… well, simply trying to survive as long as you can. It’s a refreshing sort of mode, not totally unheard of for MOBA-style games but still altogether rarer to see, and the time I spent playing it with other players was pretty enjoyable. Fallen characters can be revived by having a living, friendly character stay by them for a set amount of time, which can be difficult when you’re getting chased by a truly colossal stream of deadly enemies. Another good mode for simple, straightforward fun is the aforementioned 5v5 1-lane map – where players can face off against live opponents or bots as they try to push the opposing team back into their base once and for all. It’s like tug of war, if instead of pulling you were pushing.

The centerpiece mode, however, is the tried and true 5 v 5 3-lane map – featuring upgradeable ‘pusher minions’, likewise upgradeable towers, along with a ‘jungle’ spread on the side of the lanes for players to try and gain buffs, kill NPC creatures, or generally get the jump on their opponents. As mentioned before, Guardians of Middle-earth lacks a shopkeeper and item-buying aspect mid-game, so the focus here is almost entirely on experience gains, ganks, and lane pushing – along with picking up some passive buffs from the shrines spread out in the jungle. Considering how many games I’ve played with a map almost identical to good ol’ Summoner’s Rift in League of Legends, the Guardians map was a nice change of pace, and it was fun to try out some new and different approaches than what I’ve grown accustomed to in the other MOBAs.[singlepic id=15226 w=320 h=240 float=right]

Some rough edges, but still a worthwhile addition to the MOBA arena

The game still has some time to go before its August 29th release date on Steam, but what I saw of it was definitely promising. There were some rough edges here and there with the PC client – a lack of input responsiveness at times, and what seemed like either balance issues between various champions or my simply being lost among the decidedly different slew of options Guardians of Middle-earth throws at the player, quite possibly a bit of both.

But if you’ve been eager to slide on the robe of Gandalf, the armor of Sauron, or the… I suppose loincloth and filthy smell of Gollum, this is definitely a title that you should keep an eye on come release, and in the meantime enjoy the gameplay footage below!